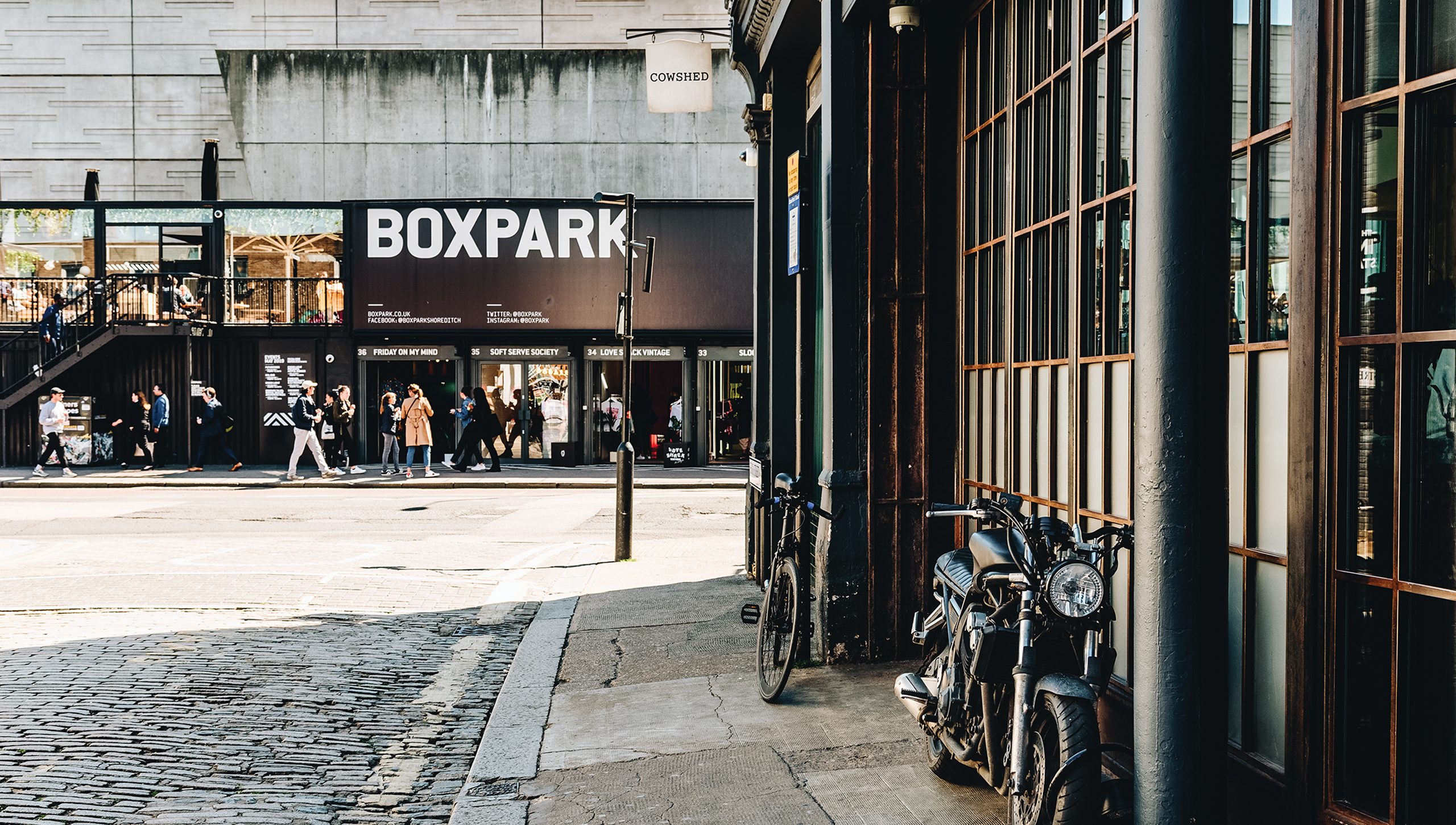 London Has the Market Cornered

From Covent Garden to Boxpark, Londoners have been reinventing the market form pretty much since people began gathering to exchange goods and gossip. Today, the ancient and ever-evolving ecosystem of markets is proving to be a savior of retail and a revitalizer of restaurants, giving Londoners and visitors new ways to be together that go far beyond the transactional.

In London, the future of retail is very much its past. Not the recent past of shuttered high streets and desolate malls. No, the future looks more like retail’s centuries-ago past—the market.

The appeal of the marketplace has traversed time and space: the sensory assault of the flavors, colors and perfumes of a tumble of goods, foods and opportunities never gets old.

The city’s Covent Garden has been making it fresh since the mid 1600s.

The urgency and immediacy created by vendors, the temporary nature of the whole affair, continues to compel. (Who can resist, for instance, the siren call of a barrow boy—“Everthin’ a fiver”—at the Columbia Road Shops and Flower Market, established in the early 1860s.) 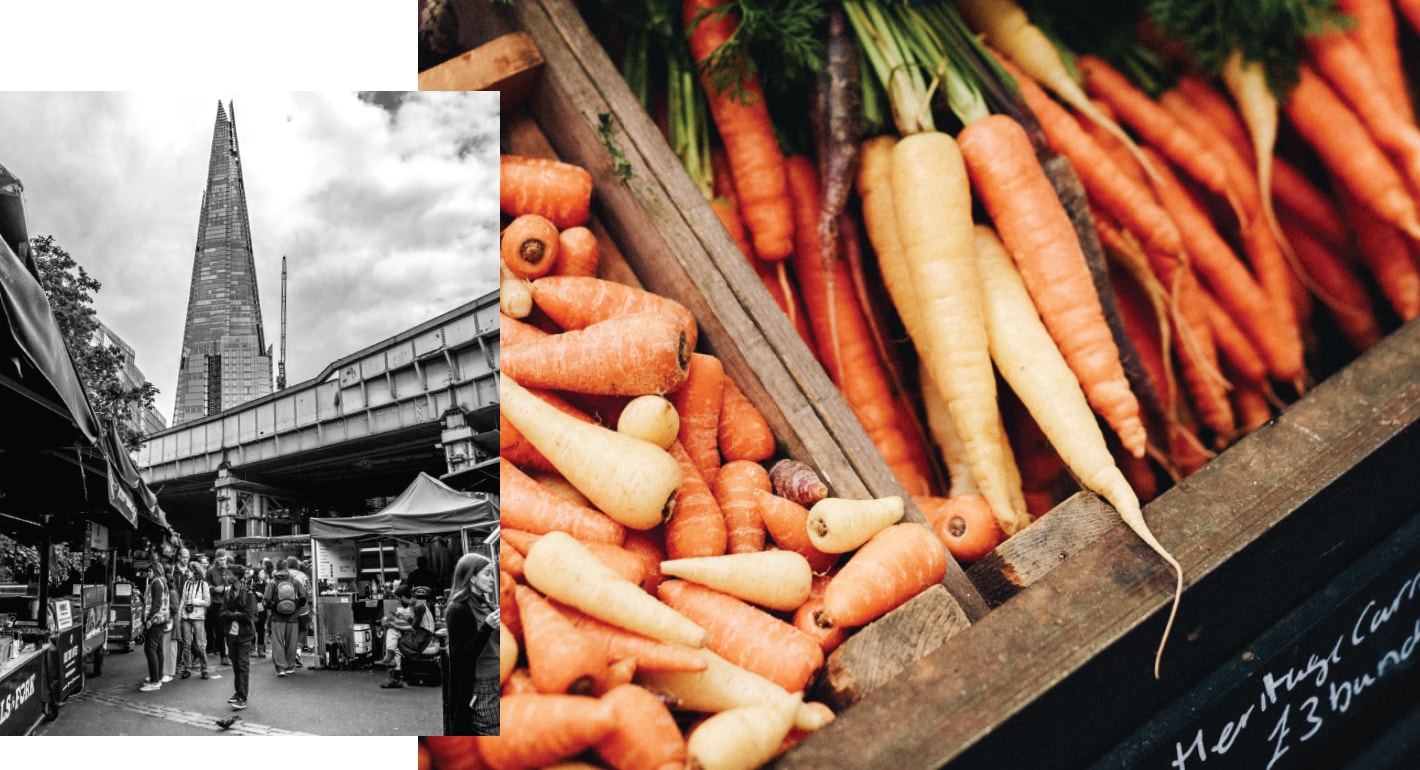 The market is forever about wading into a hubbub of humans—what the French would call a bain de foule, literally, a crowd bath—a sublime mingling and connection. At Borough Market, people have been wandering with their fellows for a thousand years; today, you’ll meander through superlative food stalls (traditional Cumbrian pork pie, anyone?) and sign up for the four-and-a-half-hour Gin Journey Soho, “a run through the neighborhood’s secret drinking dens and stunning gin spots.”

To be sure, the nature of goods has changed. No one truly needs anything from today’s markets, so while there’s plenty to purchase, markets are also perfectly crafted third places—neither work nor home—in which to demonstrate the art and mastery of conspicuous leisure, of imbibing and appreciating.

Londoners are brilliant at this: everywhere in the city they show their skill at standing around comfortably at all hours of the day and night, sipping pints and filling sidewalks with their conversation and their amiable selves, wandering between the communities of inside and outside, pub and street, winter and summer. 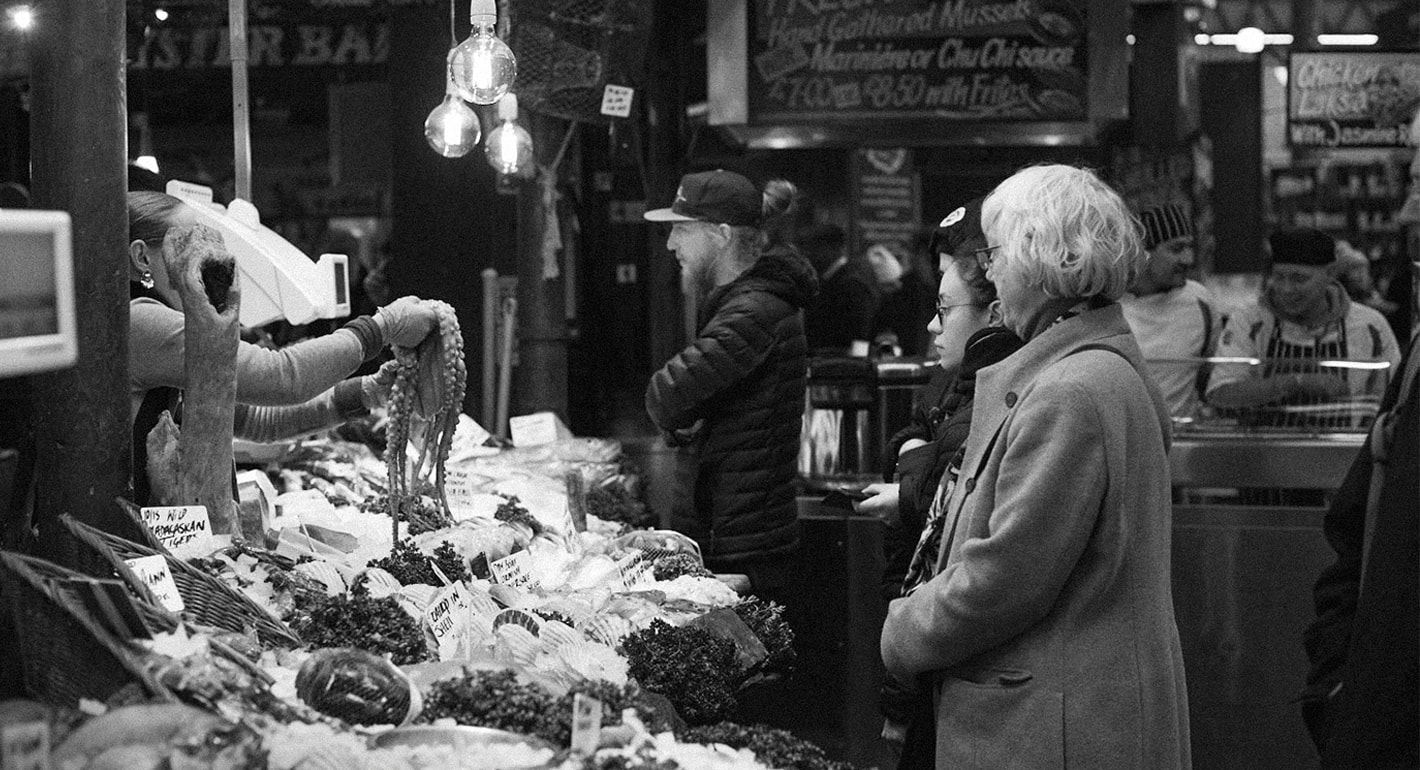 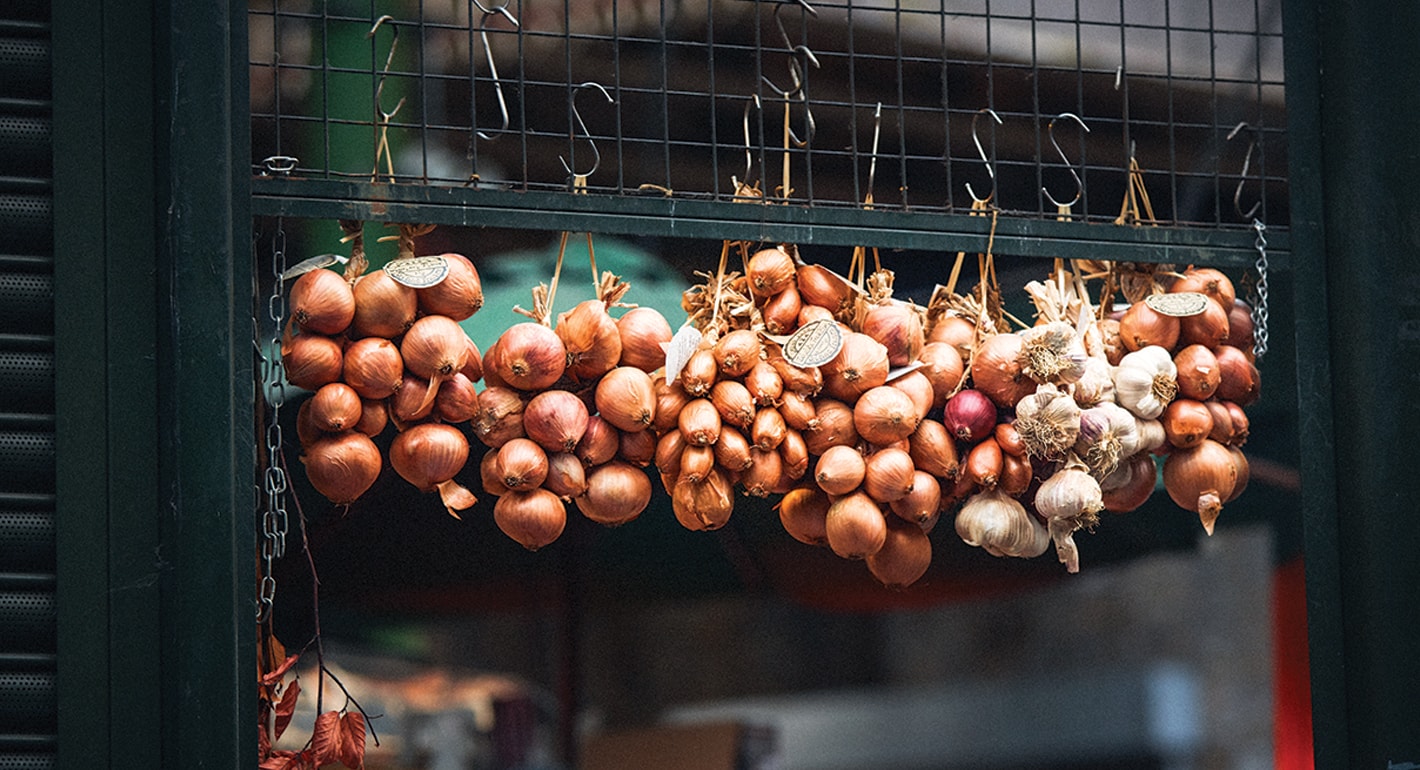 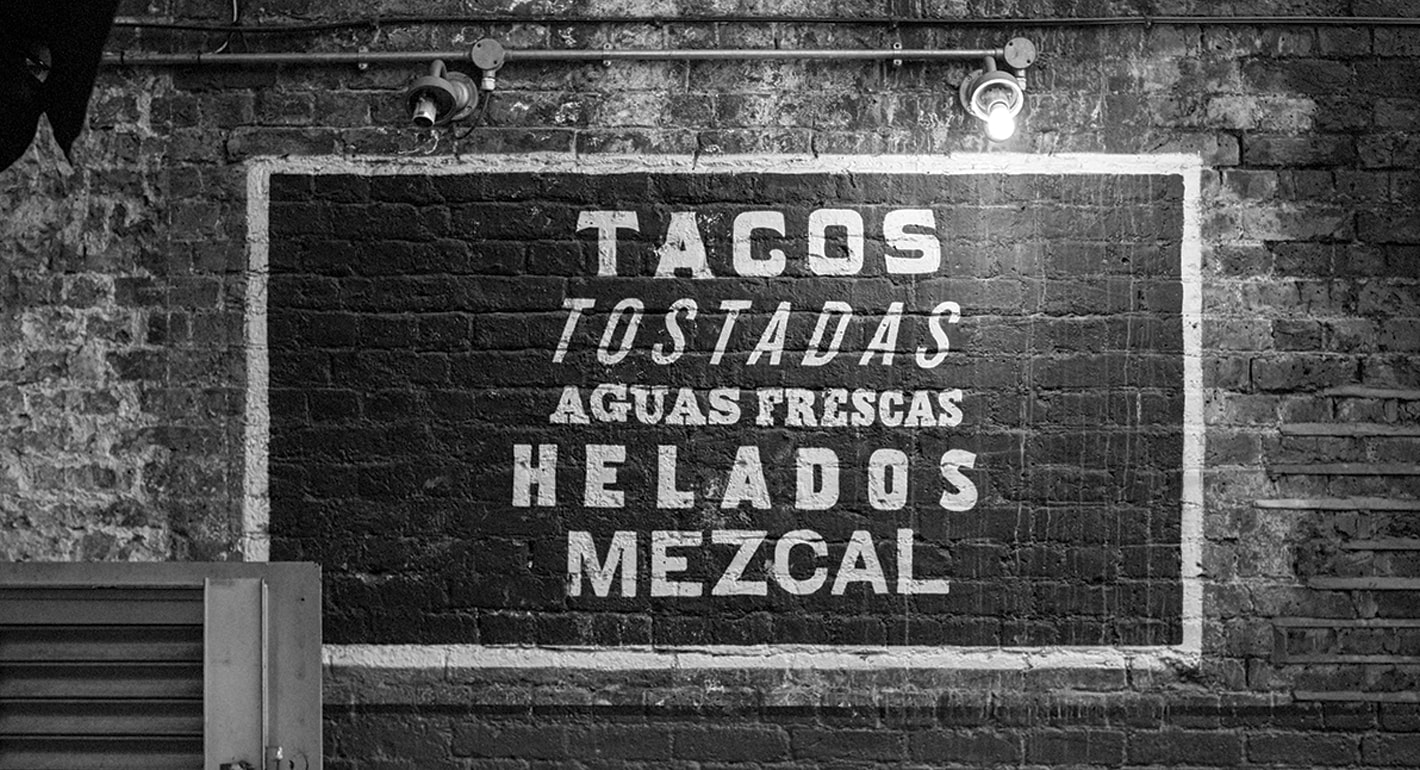 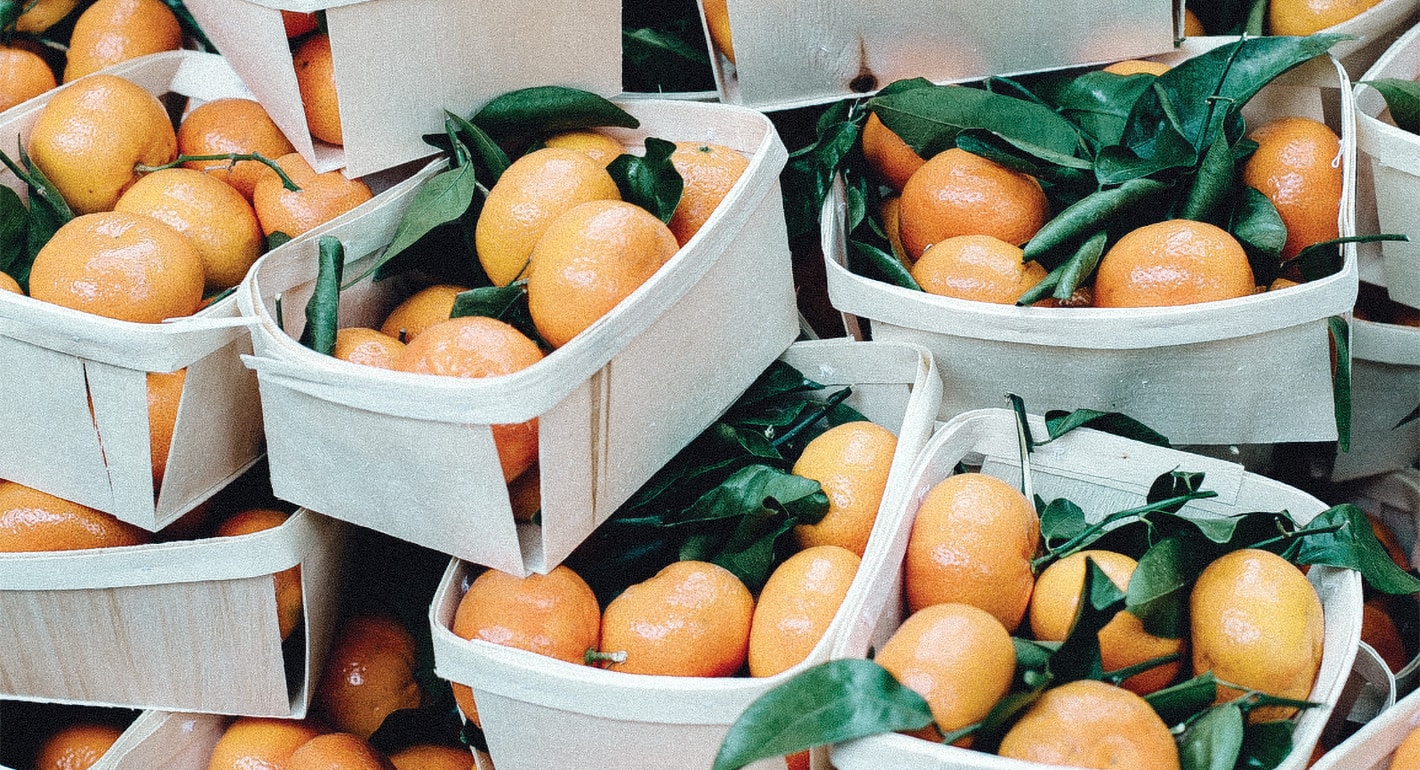 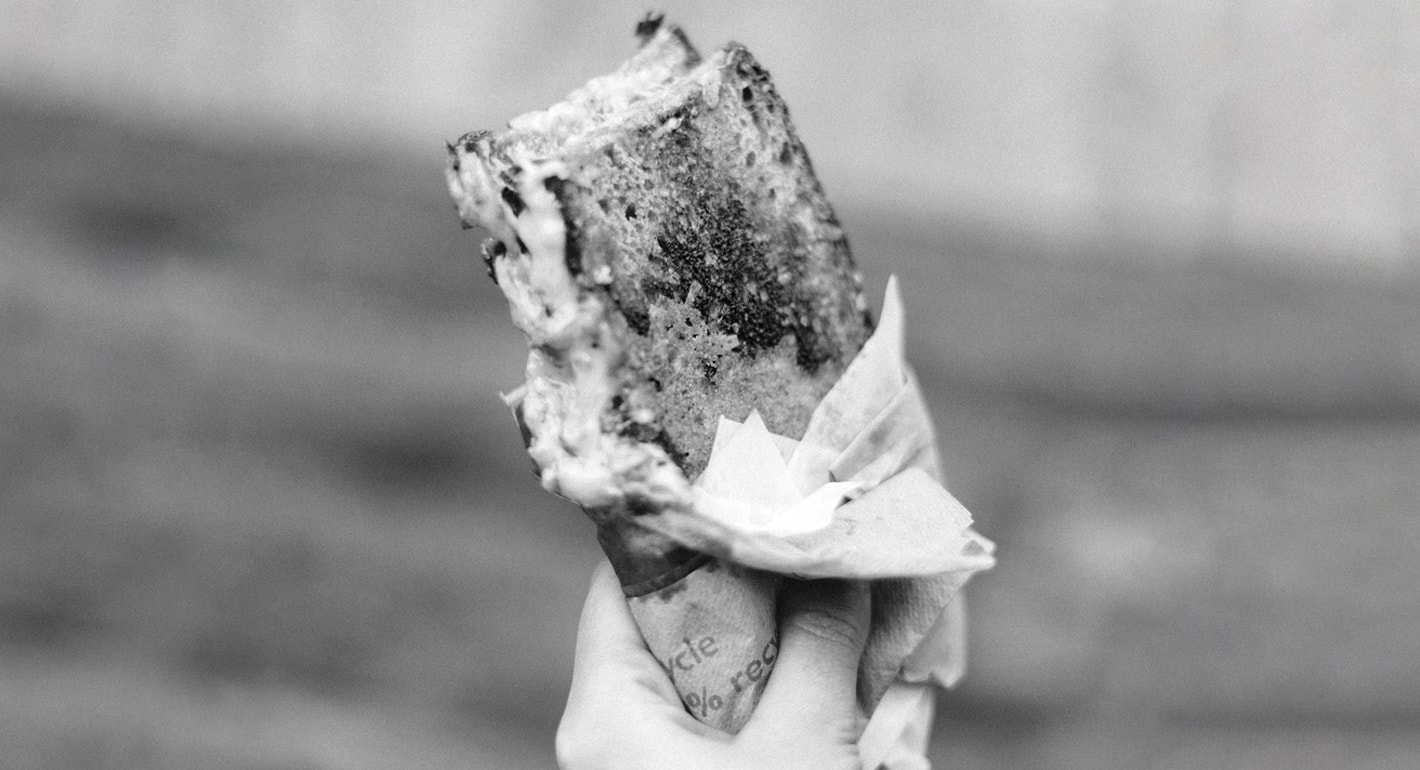 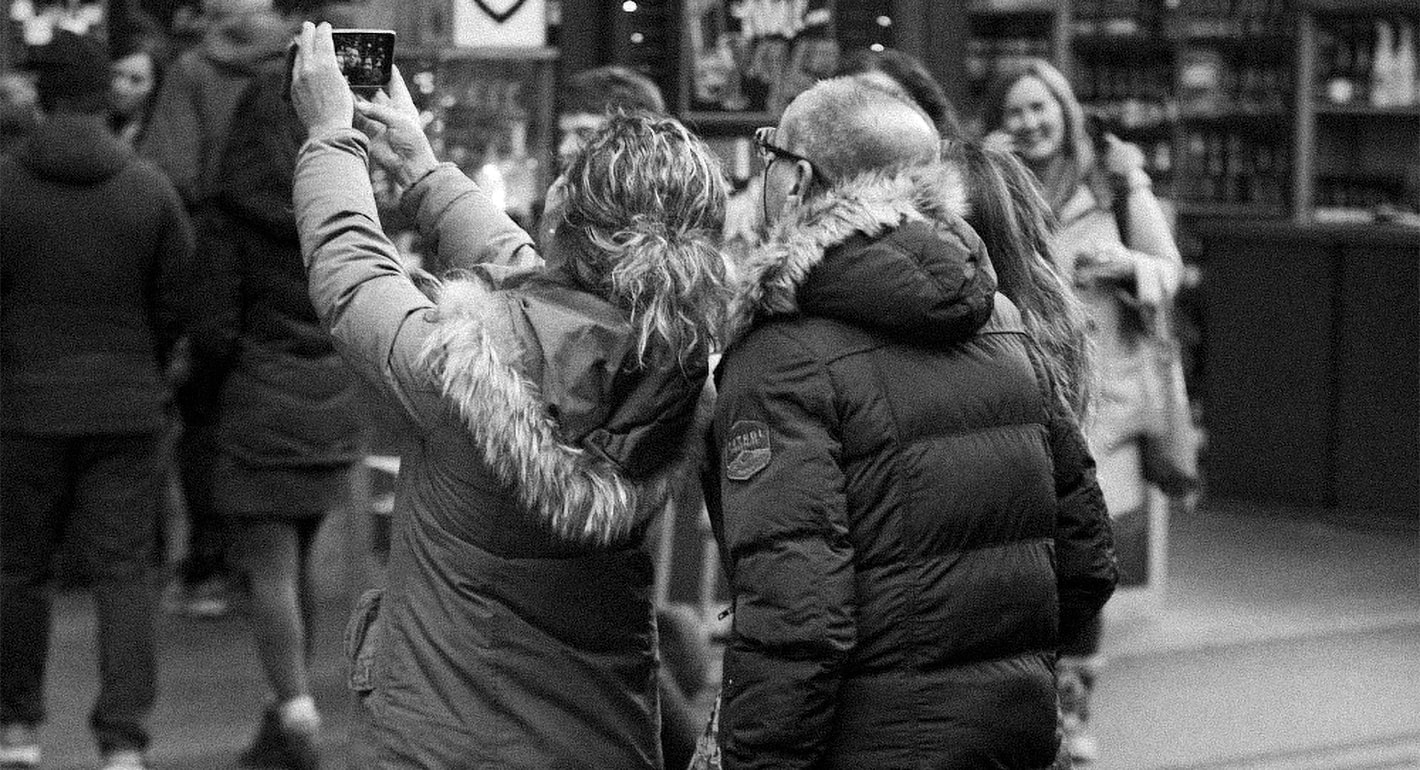 At Leadenhall Market, they’ve been at it since the 14th century.

Another ingredient in the market mix: Londoners are very good at devising ways to gobble down animals and fish—from nose to tail—with a fearless curiosity that has made them skilled adopters of the strange and wonderful street food of every nation as their own. Today, street food is a staple of every market from Spitalfields to Giant Robot in Canary Wharf. Indeed, so important is great street food to the health of modern markets that a company called Kerb offers courses to aspiring vendors, mentoring, nurturing and giving them a leg up in the dog-eat-dog business. The British Street Food Awards, run by Street Feast, is a hugely competitive and popular contest of national prides, as manifested by 2019 entries like Malaysian Fried Chicken Roti, Northern Thai Hot Dog, Posh Poutine, Raw Beef Bibimbap, and something called A Waffle a Day Keeps the Doctor Away, although the ingredients indicate otherwise.

So while some sights and flavors are new, markets are still and forever about the people: a 21st-century entertainment experience inspired by 10th-century necessity—across the centuries, consistent ingredients have been citizenry, curiosity, food and drink. Markets forever offer the comfort of a familiar face and the anticipation of encountering an attractive unknown; they’ll always provide the opportunity for a moment’s warmth with another human, even if it’s just to sit beside a stranger at a picnic table to wolf down a Vietnamese sub, drink a few pints and watch the match. Of course the lettuce is fresh. But there’s karaoke, concerts and self-improvement, too. 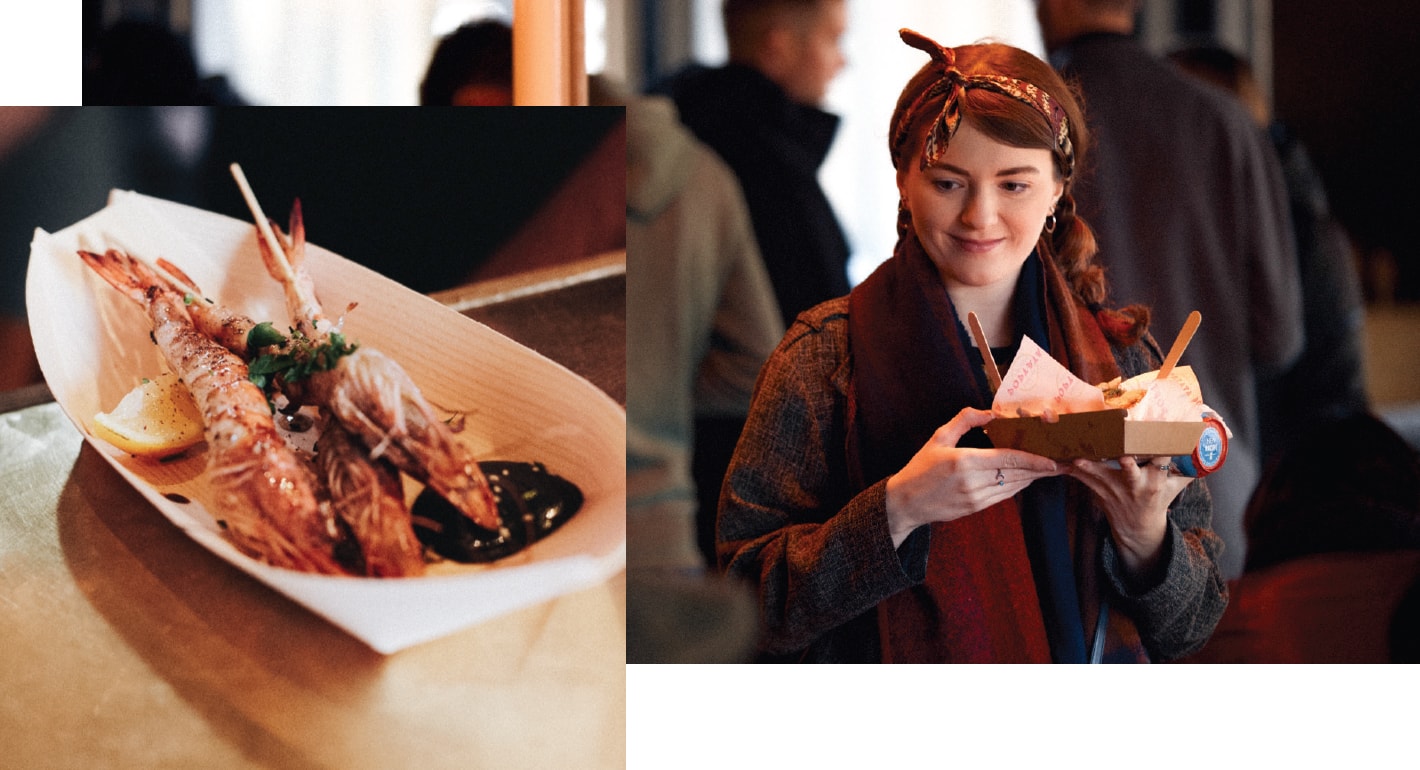 Few have understood all of this with the clarity of entrepreneur Roger Wade, who, in 2011, created Boxpark in London’s Shoreditch neighborhood. Wade’s twist on the market was the creation of a built-from-scratch, two-story “pop-up shopping mall” of 60 shipping containers on a 500,000-square-foot vacant lot in East London. And while Wade didn’t invent the use of containers for stationary purposes, he definitely took it to another level. The ultimate symbol of global mobility and efficient transport, containers weren’t ever designed with people in mind, but they turned out to be a magnet for locals, visitors and retailers—they stood out from the curved brick arches that are ubiquitous in the old marketplaces, offered small, manageable spaces for neophyte vendors, and made a modern visual statement that fit in beautifully with the Instagrammable mural art, fashion-forward shops and gritty vibe that permeated the streets of Shoreditch.

Perceived ephemerality—the age-old urgency of the market—was part of the early success of Boxpark Shoreditch. Leasing was tailored to the pop-up ethos and to the original five-year lifespan of the site itself: a day-, week- or month-long lease was a common, if labor-intensive, way to attract unusual street fashion brands, creating excitement and immediacy: Get it now, because it might not be here tomorrow! Events—up to 200 per year—enticed return and appointment visits. 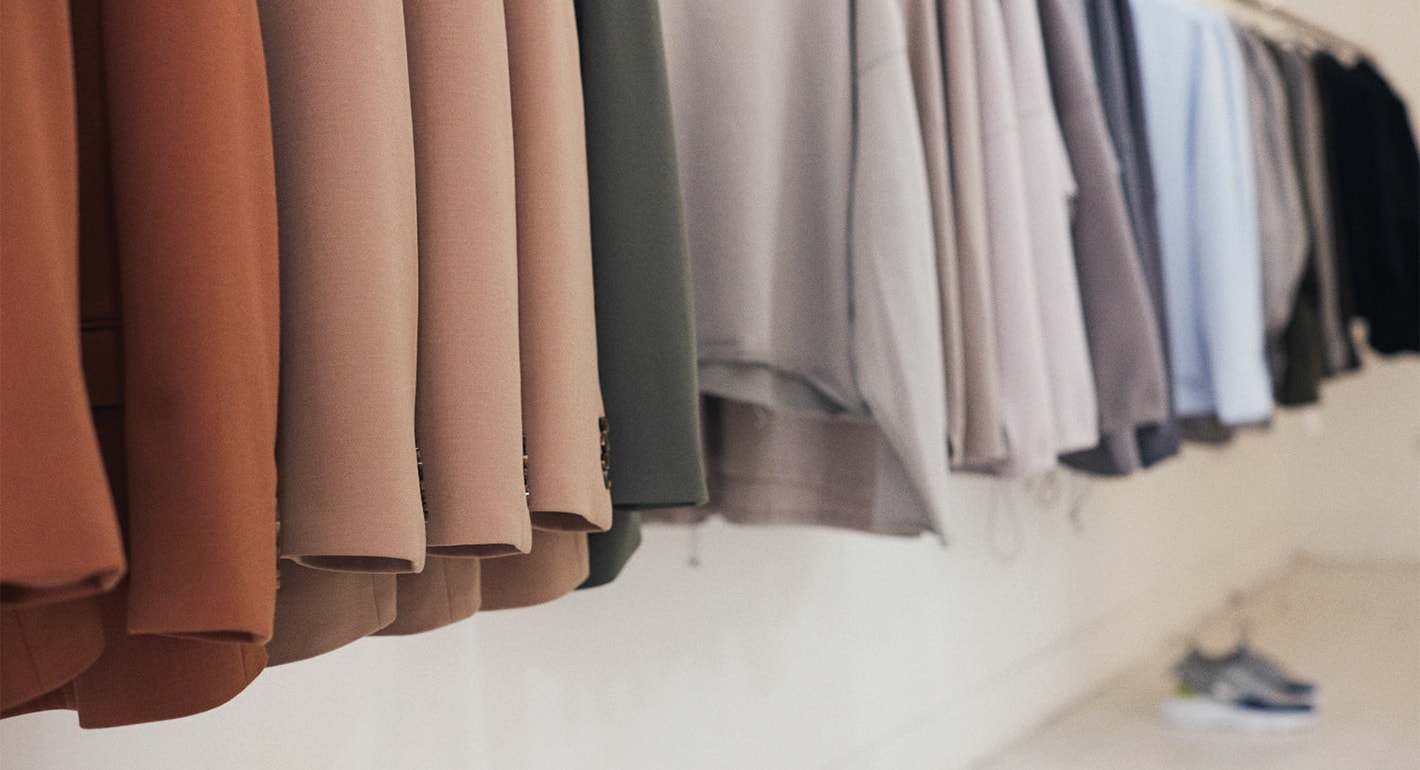 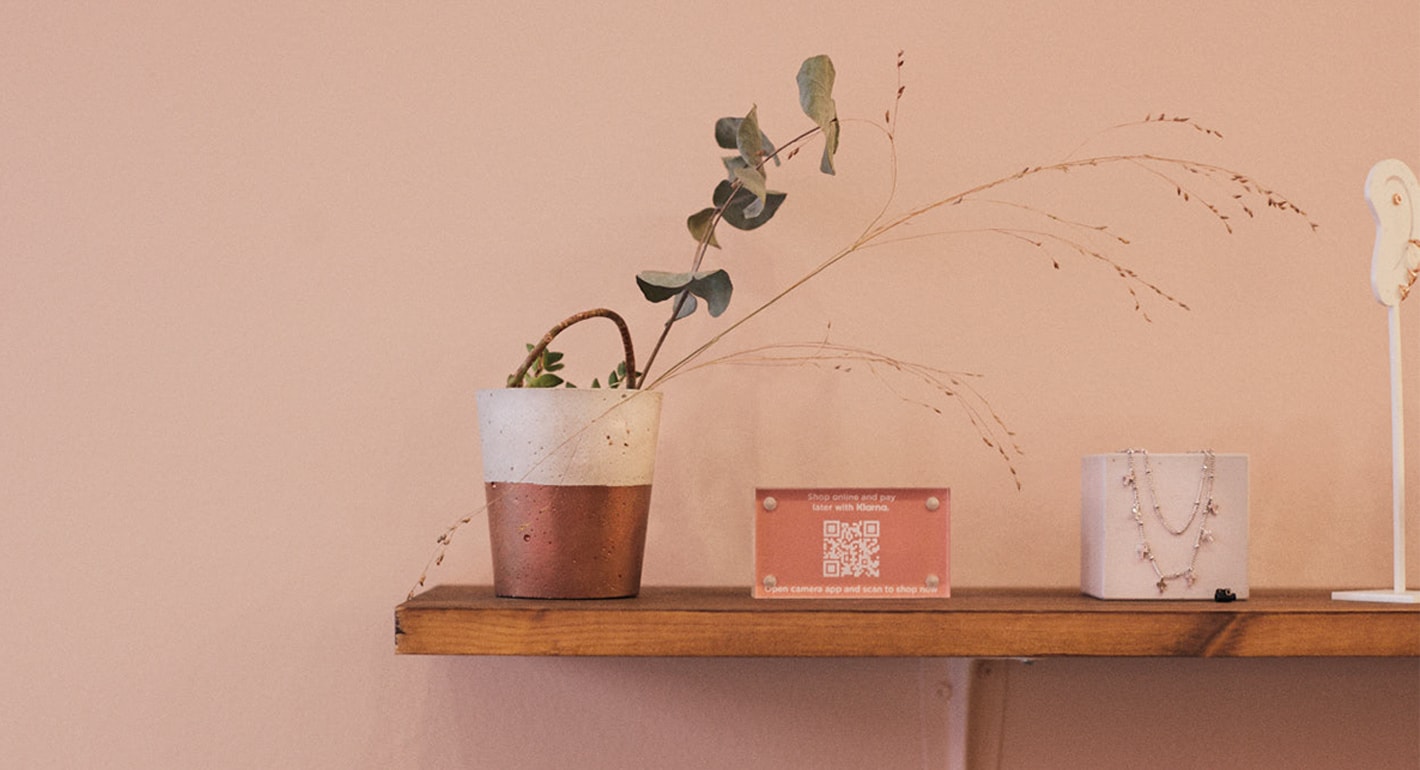 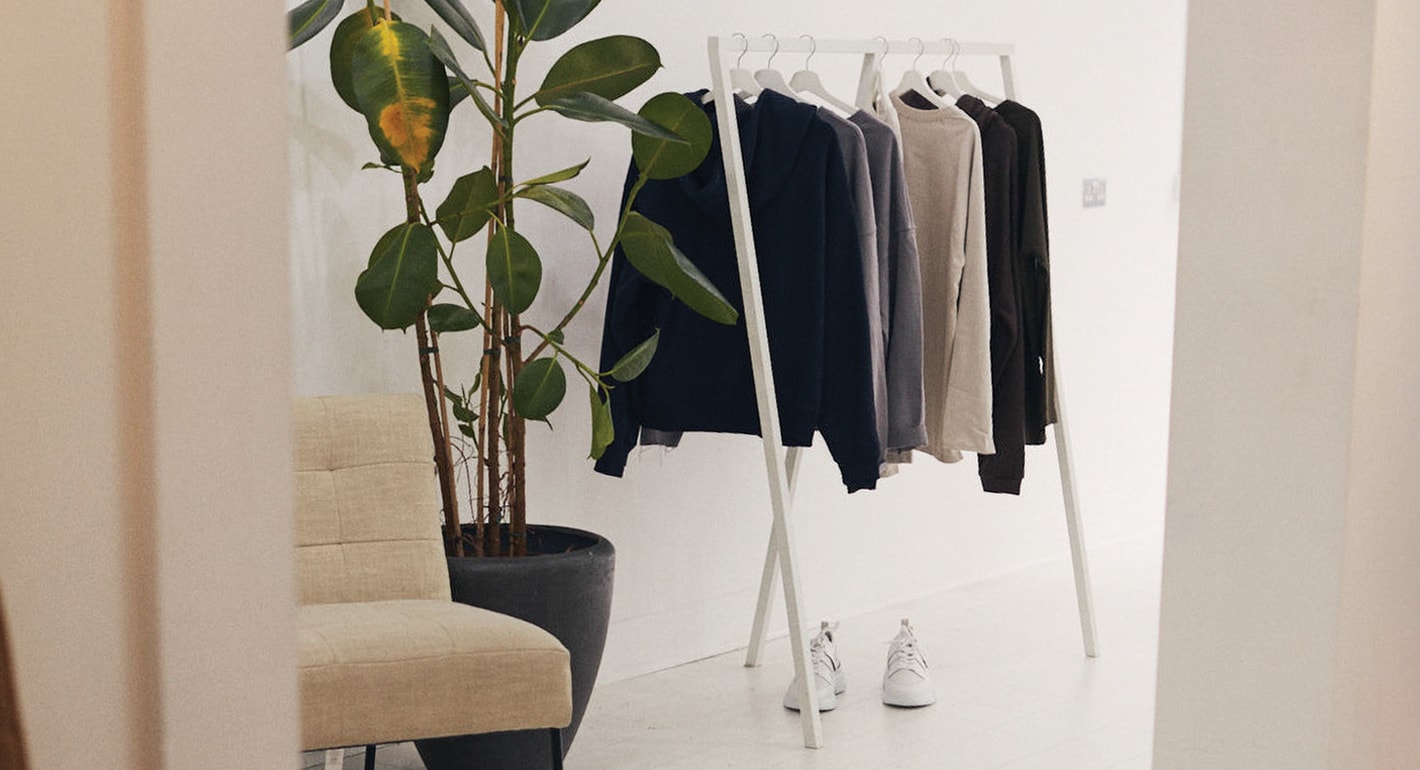 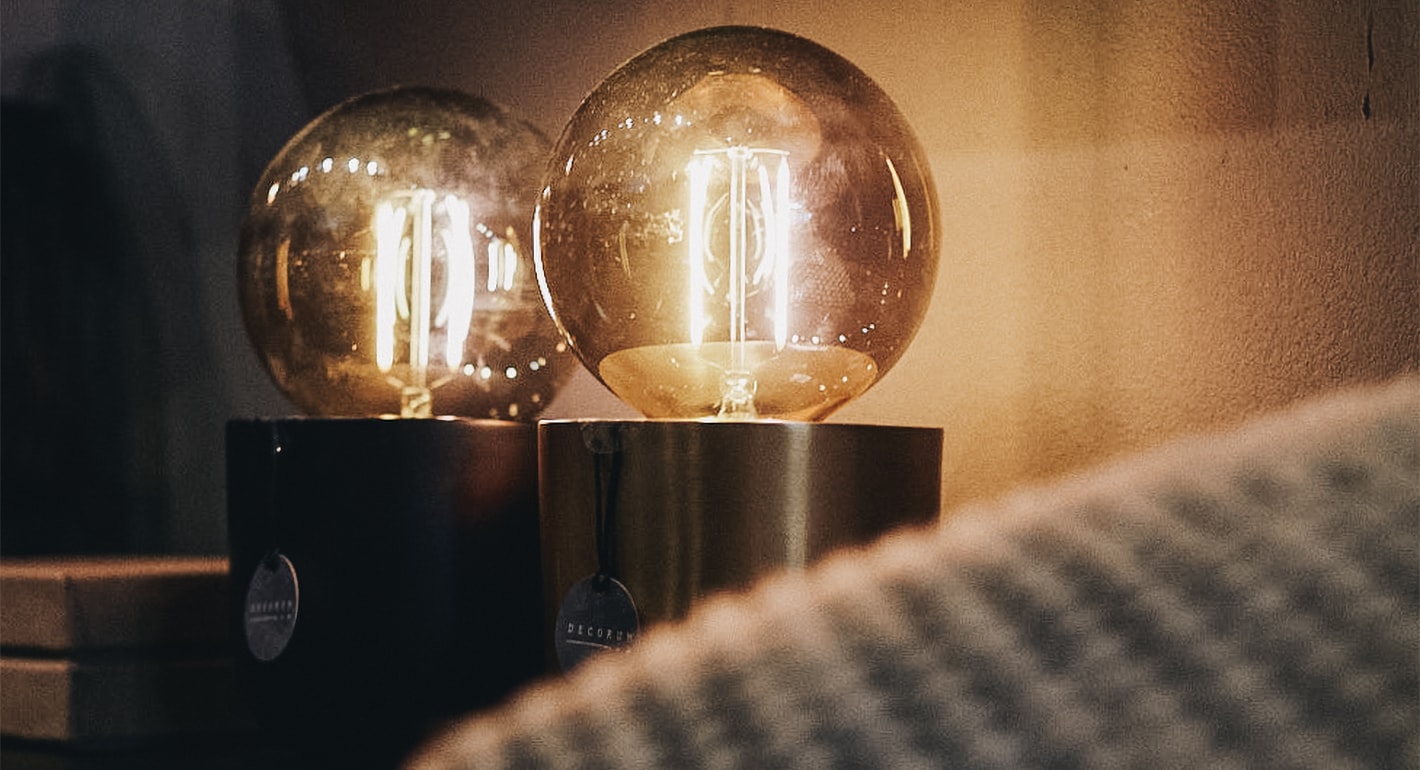 So while Wade says he started out thinking he’d save independent street-style retailers, his feelings—and quite likely a bunch of numbers—quickly told him that the future was in independent food and drink, not independent fashion and stuff.

“So we just went with that,” he says. In 2017, he remodeled his top floor in Shoreditch into a street-food hall with 19 bars and restaurants, and built in some protection from the elements so that outdoor winter noshing wouldn’t be interrupted.

Boxpark Shoreditch has hung on to some 25 retailers, which offer a range of temptations, from Only the Blind luxury streetwear to Decorum—one of those lovely home and garden accessories shops with irresistible enticements of dubious usefulness—to an Ayurvedic hair care pop-up (one month only!), and many more. 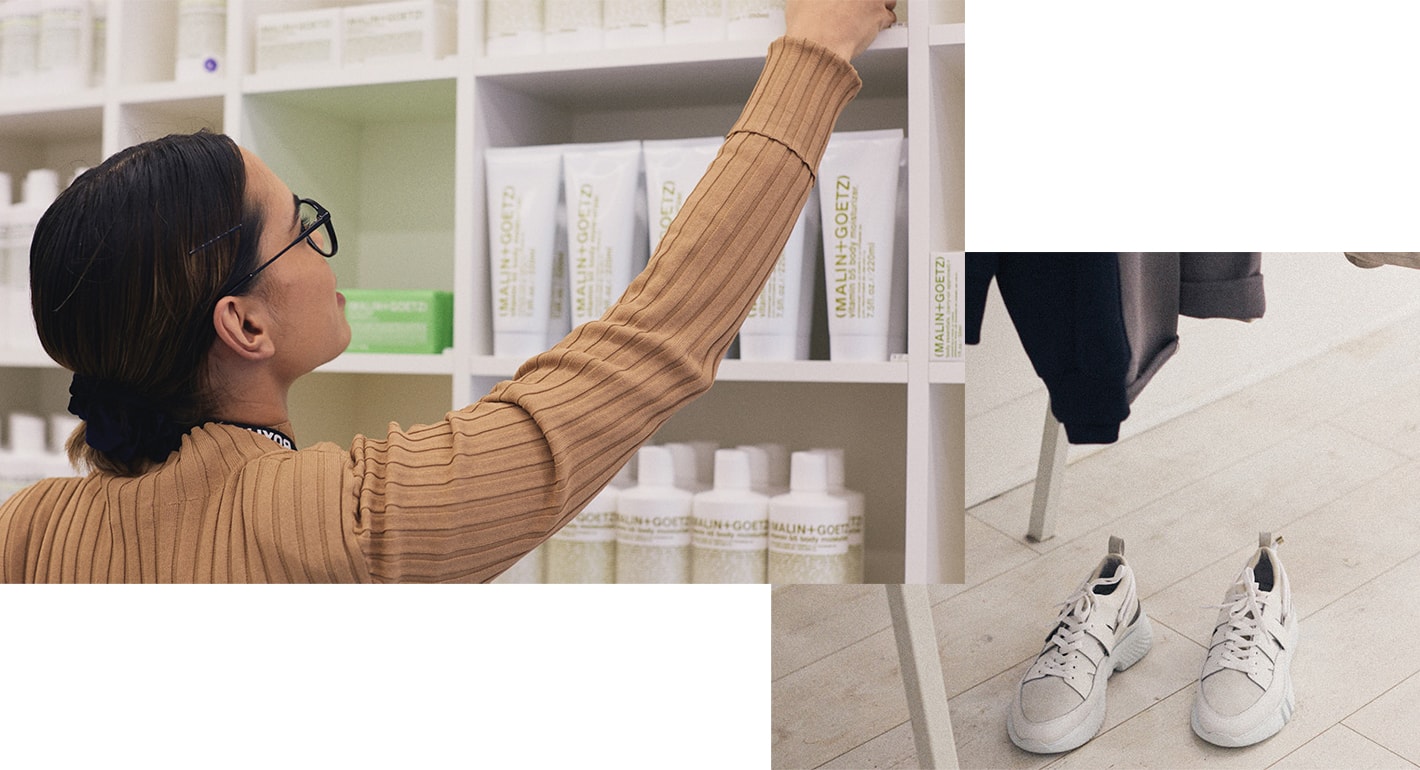 Boxpark Shoreditch is home to more than two dozen retailers

But ever since Boxpark Shoreditch, Wade has steered his startup into a resolutely Food/Beverage/Entertainment enterprise on two other major sites—Croydon (2016) and Wembley (2018). Croydon is made from 96 shipping containers and features 24,000 square feet of retail and restaurant space, twice that of Shoreditch. Events include live music and DJs, kickboxing and screenings of movies and football matches.

Croydon opened as part of the municipal Croydon Vision 2020, and the local council loaned 3 million pounds toward the project. Eater magazine noted in mid-2018 that the venue had lost half a million pounds in its first six months, and politicians were making nervous noises about the use of public money. It was suddenly clear that a Boxpark could not make a destination, and Croydon is a destination in the making, a work in progress.

Boxpark Shoreditch has long been a neighborhood anchor, but it wasn’t the only catalyst. Places don’t live by shipping container alone.

Wade has the entrepreneur’s upbeat, quick-pivot relentlessness, and the model is evolving. At Boxpark Wembley, 21 food and drink retailers are complemented by a 2,000-person event space on a surface of 50,000 square feet. It’s a major fan zone for games of all kinds—sport can mean anything from cheering a televised Premier League match to playing cornhole, taking an afternoon swing dance lesson or, depending on the degree of lubrication, hip hop karaoke.

While the model continues to evolve, Boxparks and their ilk are only ever intended as placemaking placeholders for developers until a permanent project occupies the site. Stories abound about how communities become attached to these temporary projects and their ephemeral charms, and protest their inevitable departure.

Retail is entertainment, and if you’re not entertaining your customer you won’t exist.
Roger Wade

The Shoreditch of today is a brand that rivals Brooklyn for cool (as measured by fearless creativity and collaboration of young talent—and the encroaching gentrification caused by such influxes) and evolution is inevitable.

While the commercial development long slated for the Boxpark Shoreditch site hasn’t yet been greenlit, critics are already bemoaning the effect of planned towers on the intimacy of the neighborhood. “I watched Shoreditch go from magical hinterland to the abattoir of culture it is today,” Michael Smith sighed eloquently in a 2014 Vice story. (Depending on who you ask, Shoreditch has been losing its cool since at least the turn of the 21st century.)

In the meantime, Wade is investing in the Boxpark brand for the long term—in the case of Croydon, a project designed to last five years, the investment was 2 million pounds, a considerable sum for a short-term lease on life. “Before Boxpark, nobody did that,” Wade says. 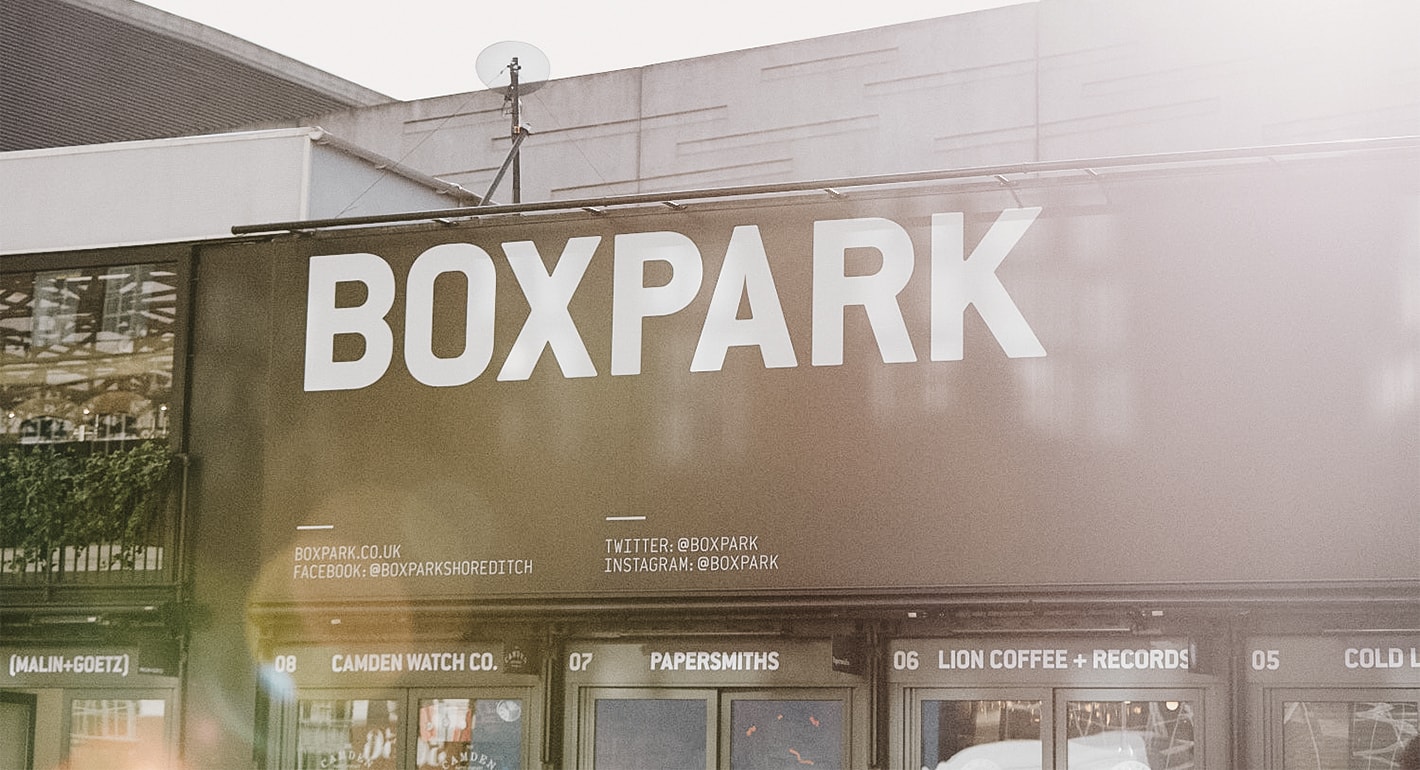 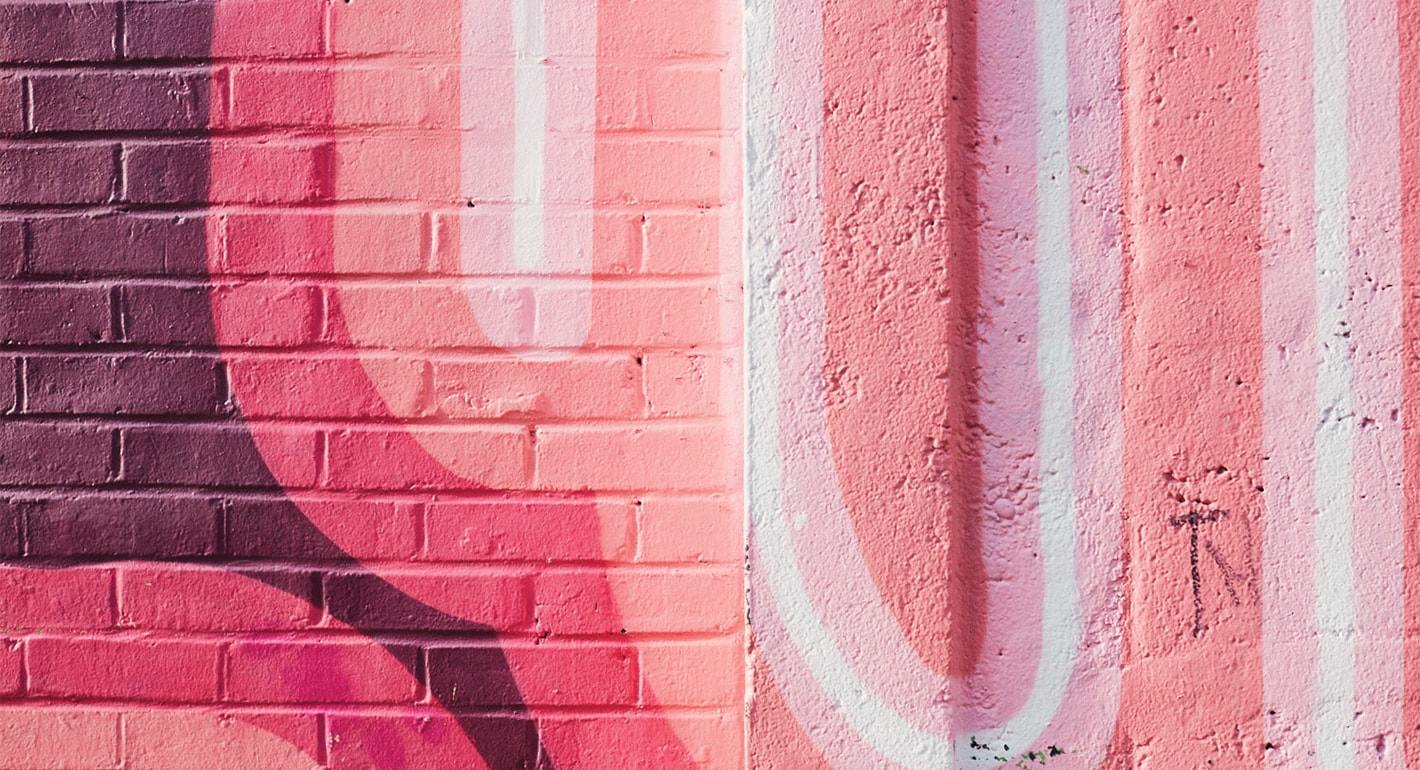 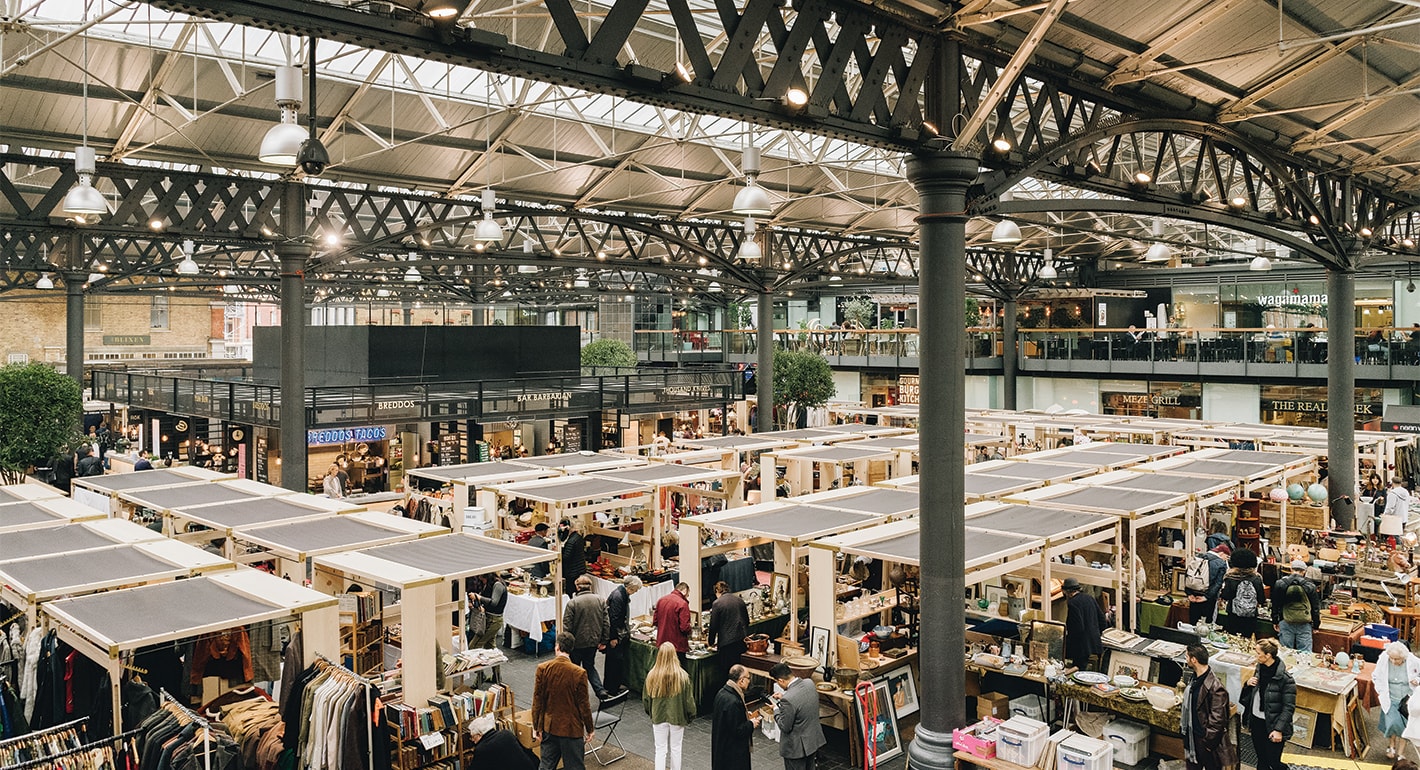 But investment is critical—the placemaking-as-entertainment space is crowded with competitors ancient and new, and along with the city’s venerable and ever-vibrant marketplaces, new forms are emerging.

Seven Dials, an entirely indoor market in a former banana warehouse, is a food hall “for talented entrepreneurs” that also offers a hip private dining space. At Vinegar Yard, an eventually developable parking lot, there’s an urban garden, food stalls, vintage fashion and antiques and “even a bonkers installation by artist-in-residence Joe Rush, famous for his scrap-metal sculptures at Glasto,” according to an eager Time Out magazine report.

“Retail is entertainment, and if you’re not entertaining your customer, you won’t exist,” Wade says. Somewhere in the mists of time, far beneath the grounds of Covent Garden, a hawker is laughing.