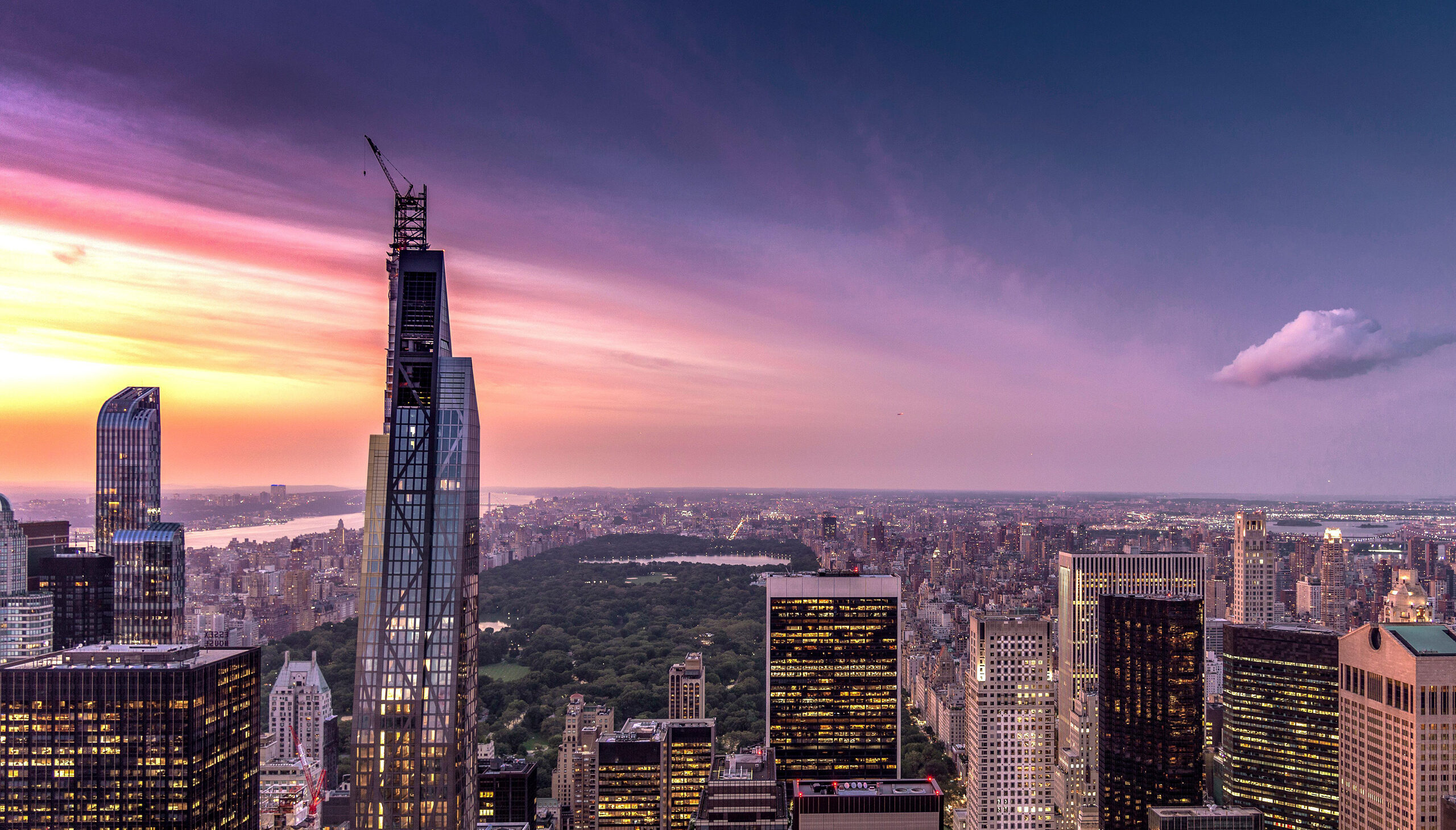 Work is never going to be the same. So where does that leave Midtown Manhattan, capital of the capitalist work ethic?

It’s the place that created and evolved the ubiquitous art of the hustle, the high-speed hub of business, the energy, the pulse. Bristling with enterprises of every description, alive with opportunity, it generates a small country’s GDP weekly and shovels the drama of stories of success and failure into the myth that is New York.

And yet, very few New Yorkers call this place “home”; in early 2020, Midtown was home to only seven percent of the city’s population of 22.6 million but claimed a full 25 percent of its 10.6 million jobs. It was also the best-paying market for “white-collar work.” Finance, media, lawyering, public relations and marketing pay far better than other industries, with an average salary of $131,600 per position.

For context, in the same period, the tri-state region’s 2.8 million office jobs represented 30 percent of private-sector employment but 52 percent of wages. And 41 percent of these jobs were in Manhattan.

But that was the before.

On March 7, 2020, everything changed. As the global pandemic ripped through the city, former Governor Andrew Cuomo declared a state of emergency: schools and non-essential businesses were closed, public transportation systems were reduced, parades and events were put on hold indefinitely, masks were mandatory and restrictions were imposed, tightened and re-tightened. The state of New York was on PAUSE (Policies that Assure Uniform Safety for Everyone), and this remained the “new normal” for months.

Then came the after.

The entire city, but especially Midtown, felt unnatural in those first few months of the pandemic, when everything went totally quiet except for the sounds of ambulance sirens and people clapping for essential workers at 7 p.m. Times Square’s neon billboards blinked eerily, hawking glamour and Broadway, products and services to no one.

As one of the world’s largest office districts, Midtown has been hard hit by the sudden shift to working from home. Its retailers and service providers, from salad makers to shoe shiners, which were propped up by the enormous amount of daily foot traffic, are suffering from both the
acceleration of e-commerce and steep decline in tourism. Yes, as of early 2022, things are changing, but the road to recovery is bumpy, and wave after wave of virus variants restart the cycle repeatedly. With the loss of business and leisure travelers, many Midtown hotels decided to keep their doors closed until the end of the crisis, while others have shuttered permanently. 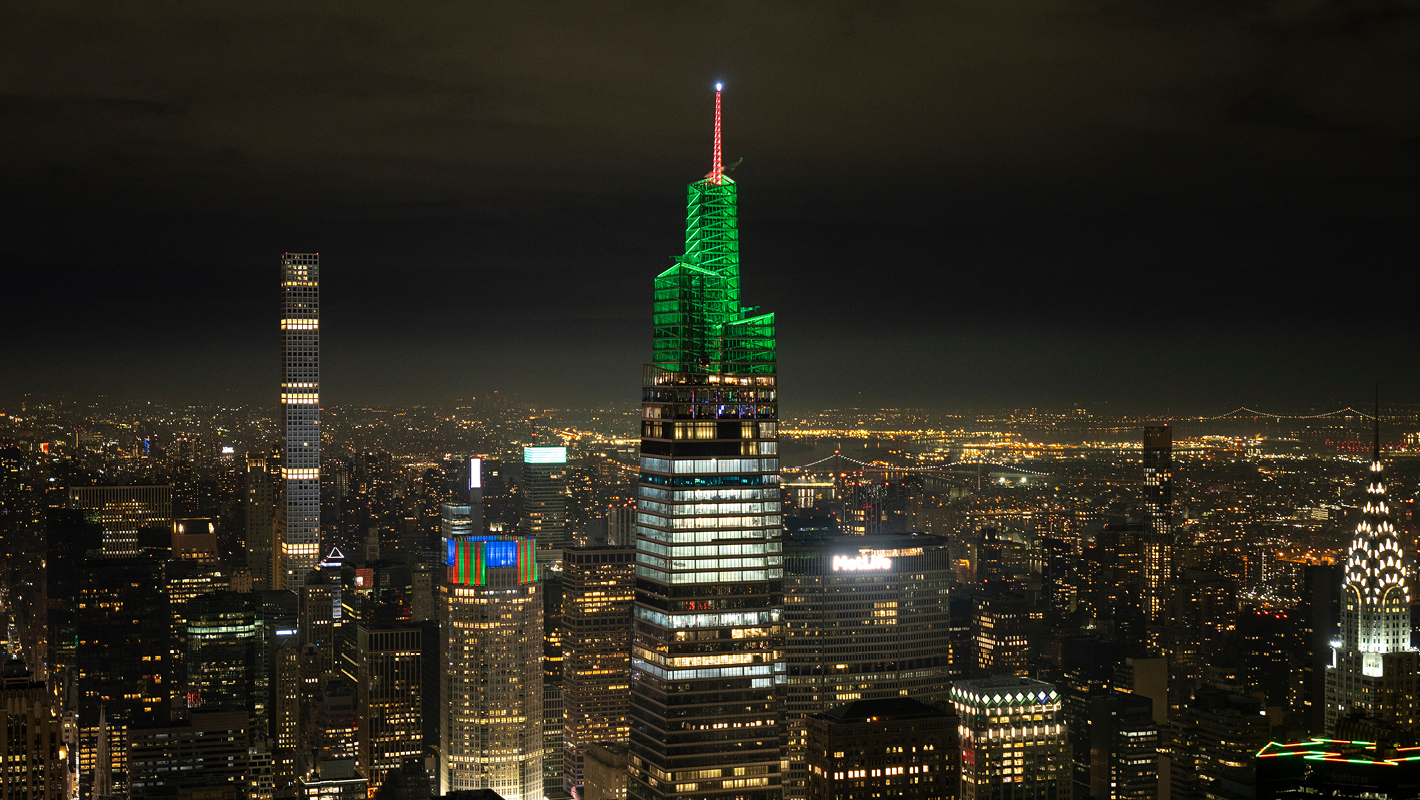 ABOVE & BELOW
Peak office: One Vanderbilt's observation deck 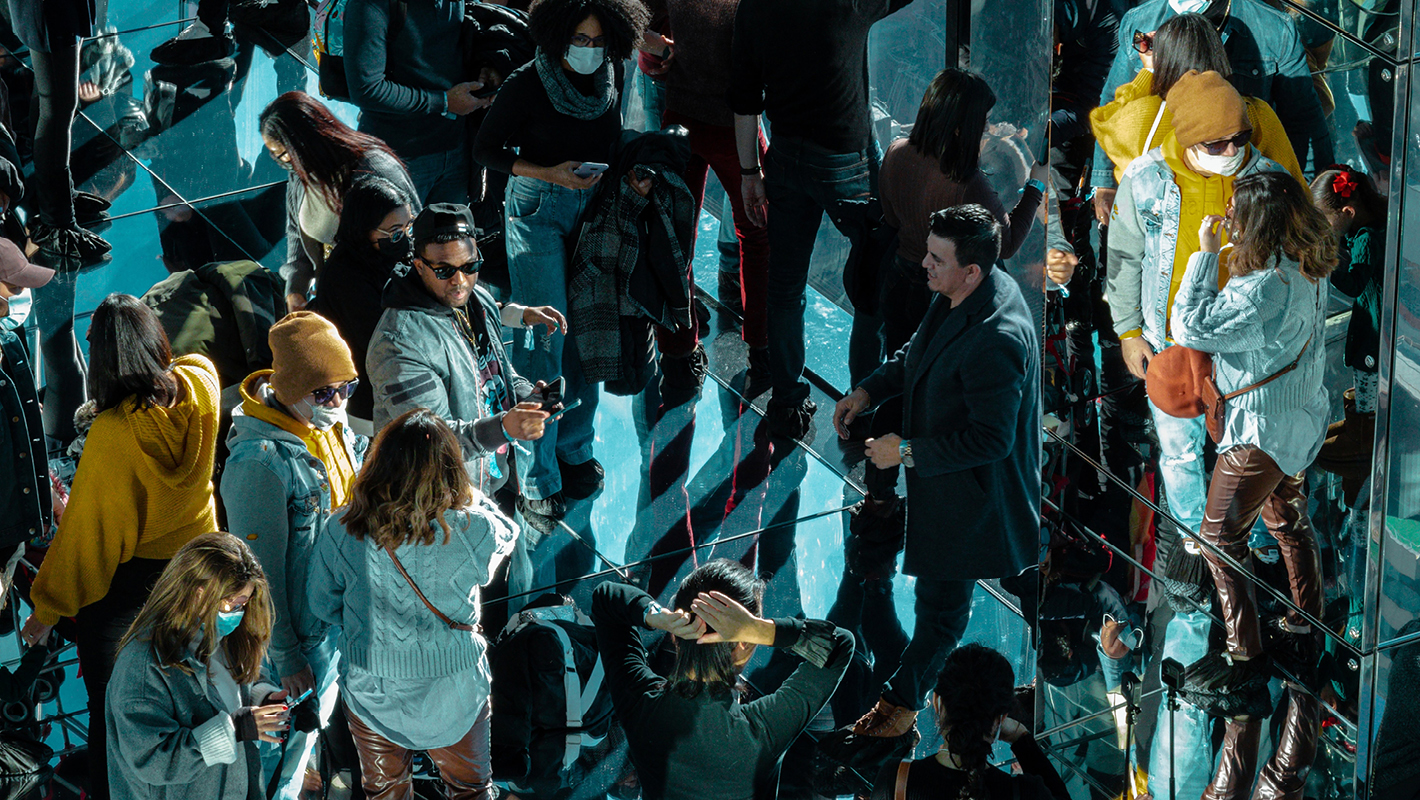 The market value of the city’s office building inventory plummeted 16.6 percent over the past year—its first such decline since at least 2000, according to an October 2021 report released by the Office of the New York State Comptroller. According to a report by the Partnership for New York City, 80 percent of Manhattan employers said they expected a permanent change in their remote work policies, while a third anticipated they would need less office space in the next five years. The lustre is off residential space, too. At Extell Development’s Central Park Tower, the Billionaire Row skyscraper, 106 unsold units stay listed at $10 million or more, and 38 condos at $10 million or higher remain available at 53 West 53rd. That’s just the tip of the iceberg.

Is the business district office dead, then—just as dead as those mid-twentieth-century urban factory jobs in the Rust Belt? Not quite yet. Real estate developers, urbanists, market experts and others are now pondering if the pandemic has created an opportunity to reinvent office districts by making them more residential. It’s an idea not without financial and logistical challenges—but if an owner doesn’t see any economic value in investing in a property to keep it marketable and maintained as competitive office space, then transforming it into affordable housing in the most expensive part of the city may just be a viable solution.

Farther downtown, the evolution has been taking place for more than a decade. The Art Deco landmark One Wall Street, once home to the Irving Trust headquarters, has become the largest office-to-residential conversion project in New York City’s history. The 21st-century overhaul is expected to cost around $1.5 billion, transforming the 90-year-old, 564-foot-tall commercial skyscraper into a residential hub with 566 new units—ranging from studios to four-bedroom apartments—anchored by a 44,000-square-foot Whole Foods Market and a Life Time fitness center on the lower levels.

Of course, this project did begin with the interiors being completely gutted and redone from scratch. And this kind of adaptive reuse, where an old building is converted for a new purpose, has been in vogue for decades. In Atlanta, an old Sears building was turned into a mixed-use hub called Ponce City Market in 2014. Philadelphia developer and cofounder of Historic Landmarks for Living Carl Dranoff financed the conversion of over 20 underused factories and warehouses into loft apartments like The Chocolate Works, Wireworks and the Touraine—in Philadelphia, almost 2,000 buildings dating from the 1950s through the 2010s have been converted into apartments. That’s about 11,200 apartments in hotels, office buildings and disused factories. And a growing number of cities, including Los Angeles and Phoenix, have been passing ordinances that make it easier to turn old buildings into Housing.

Older buildings are one thing. Newer offices present a whole other set of challenges. Oftentimes, their floor plates are too big and many don’t have operable windows. This creates a sort of “donut effect” where the exterior of a building, closer to windows, can be converted more easily, while large shares of space toward the core pose a greater challenge. Plus, the conversions themselves—which involve overhauling the plumbing and electrical systems of a building and constructing new bathrooms and kitchens where there are none—come at a significant cost, and uncertain economic and political factors make them practically difficult to pursue. 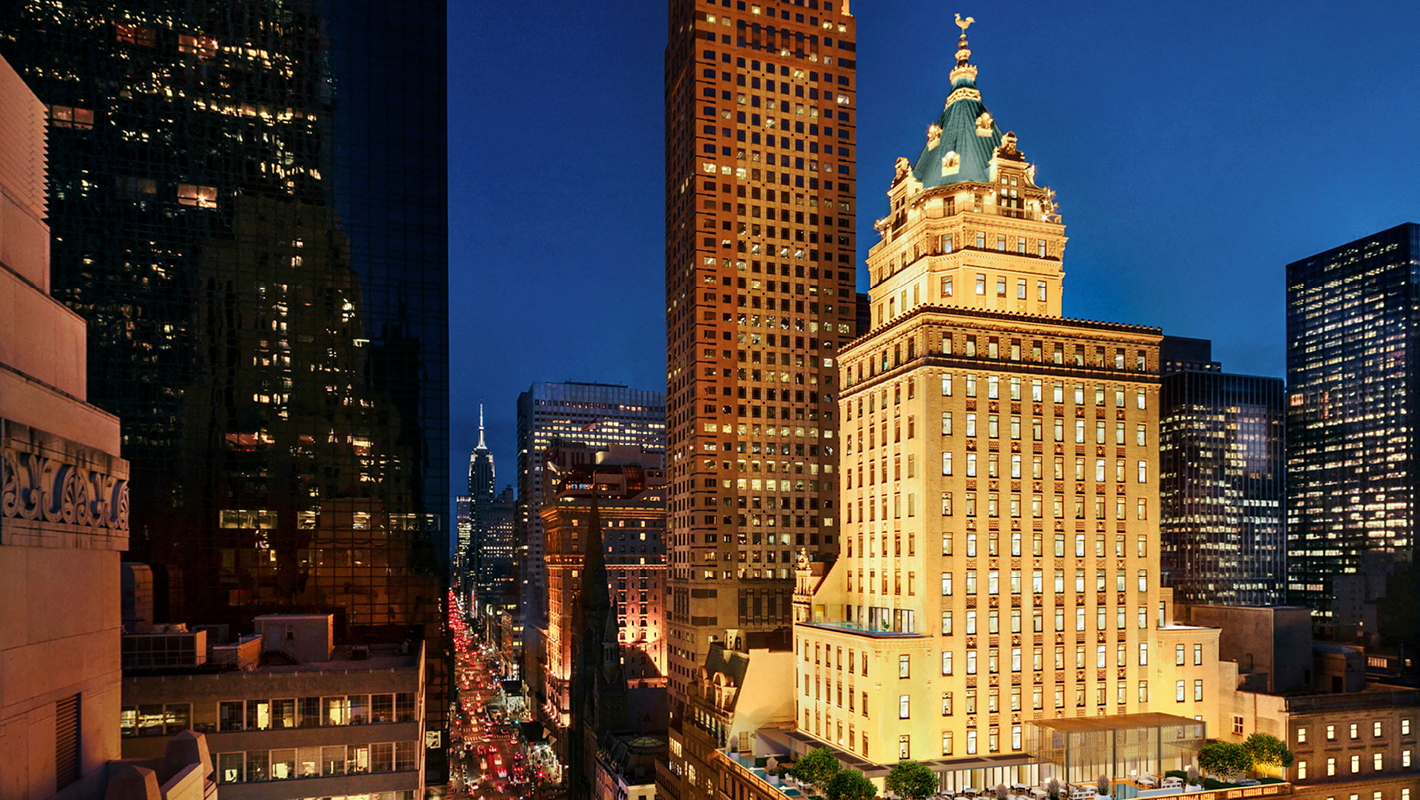 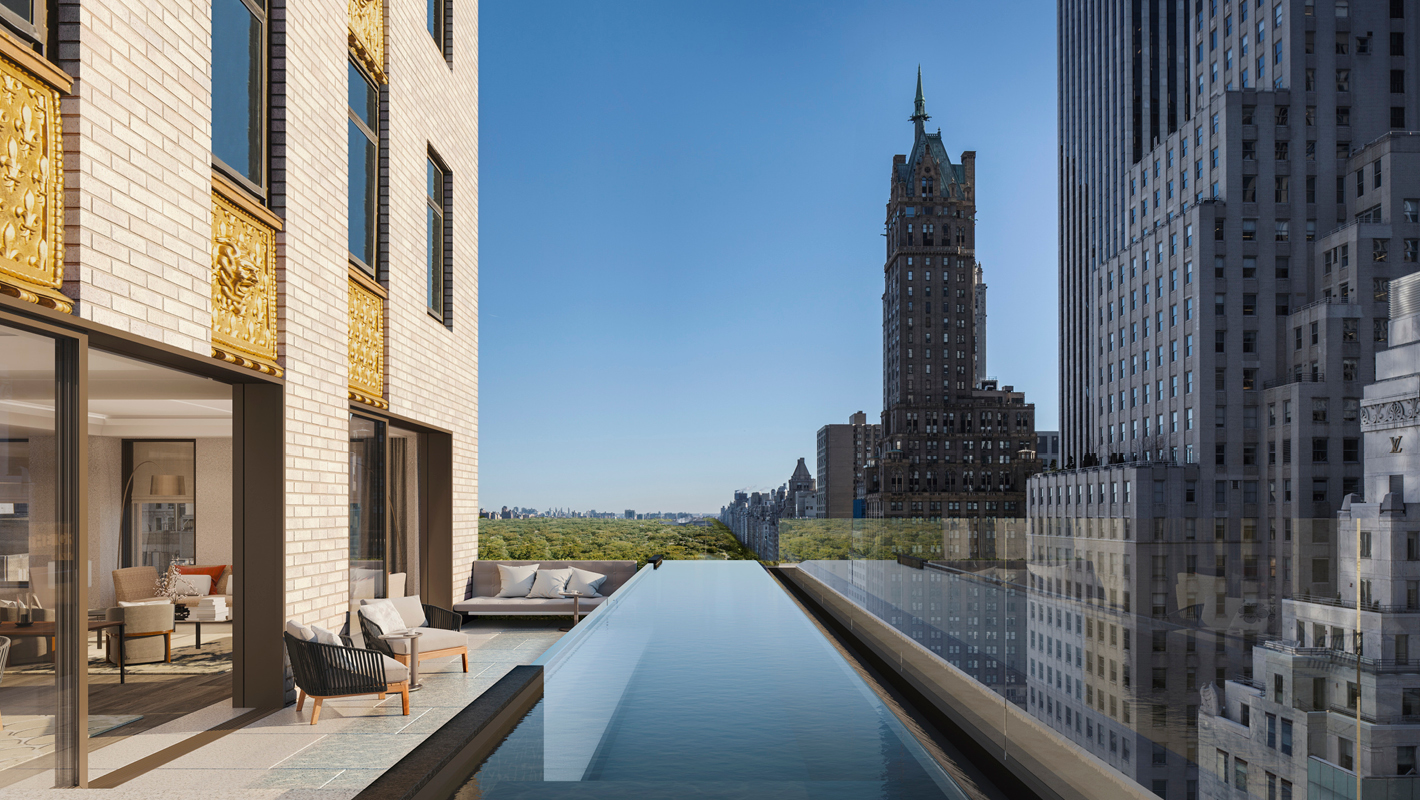 While adaptive reuse may yet be a glimmer of hope on the distant horizon, other changes are happening now. New York City officials are supporting the move to capitalize on a distressed tourism industry by converting commercial hotels into affordable housing—including creating single room occupancy units known as SROs. This is in addition to the mayor’s focus on transforming distressed hotels into supportive housing for the city’s displaced and homeless population. Developers are starting to consider struggling hotels as potential investments.

In 2021, Emmut Properties purchased the Excelsior Hotel on the Upper West Side, and plans to convert the entire place into apartments. In the same year, Yellowstone Real Estate Investments put down $175 million for the 600-room Watson Hotel in Midtown, and plans to turn one of the hotel’s two towers into market-rate apartments. Elsewhere in midtown, hospitality institutions are adopting entirely new identities. After decades as the Parker, the cheerful West 56th street hotel has been transformed into the Thompson Central Park, a hip hotel that will be topped by condos. It’s designed as a gathering place for eventual leisure and business visitors, to be sure, but also for its owners and nearby residents—perhaps even owners at the Aman, the Mandarin Oriental or the Waldorf, which pitches its residences as the city’s “most glamorous pied à terre.” Slowly, slowly, midtown is telling a story of a neighborhood that’s as much about people as the work they do.

Wealth? Always part of the story. 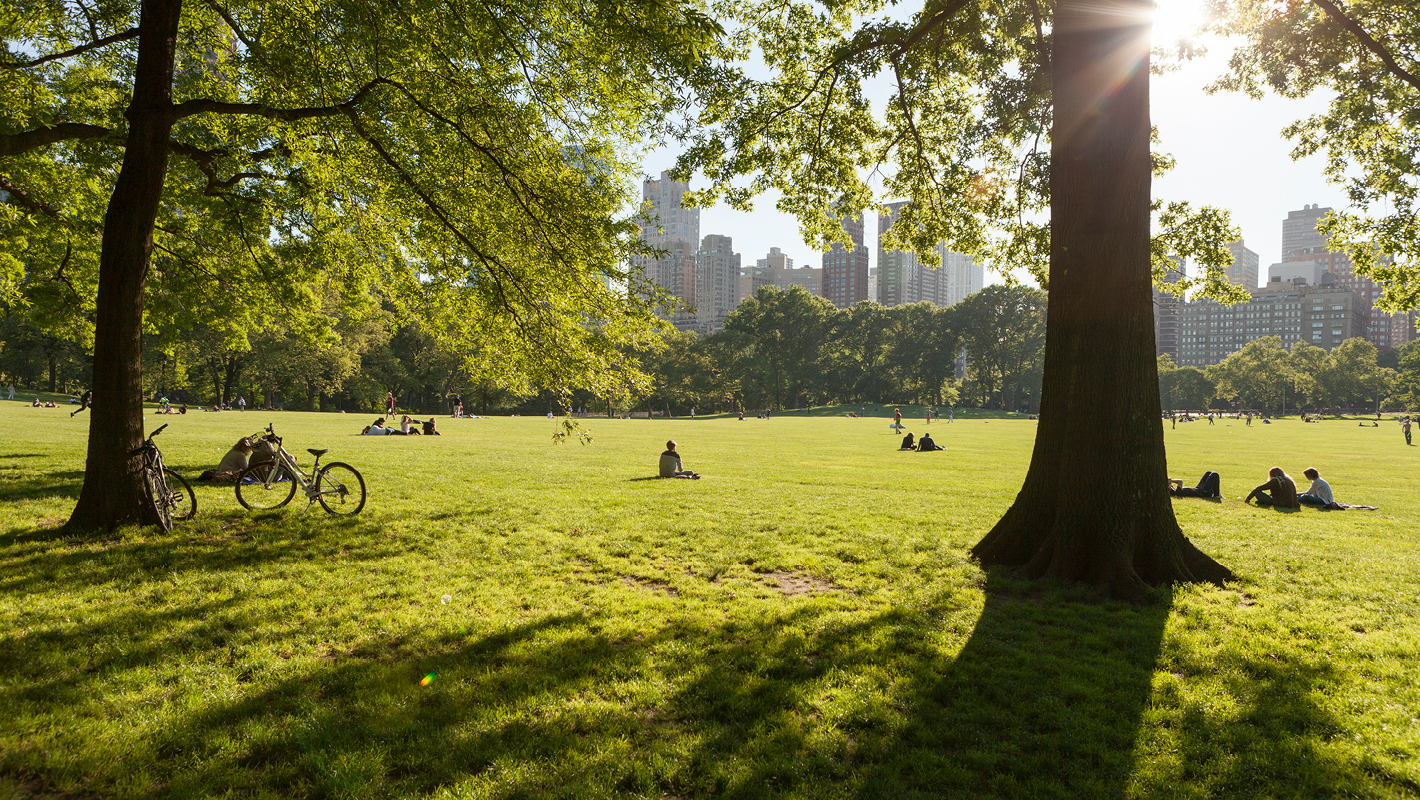 A Makeover for Midtown?

What if Midtown did a rethink before rushing into reuse?

The pandemic changed people’s relationships to their immediate neighborhoods, bringing the idea of the 15-minute city or 15-minute neighborhood to the fore. Developed by French urbanist Carlos Moreno, the theory considers that all the necessities of daily life—shops, schools, workplaces, doctor’s offices, parks, libraries, restaurants and other amenities—should be located within a 15-minute walk or bike ride from home. In 2020, the 15-minute city was picked up by the C40 Mayors as part of their “Green and Just” recovery plan. Melbourne is proposing self-contained communities within an 800-meter radius of services. Portland’s Climate Action Plan calls for more vibrant neighborhoods in which 90 percent of the residents can walk or bike to fulfill their daily needs. And Sweden is pursuing a hyperlocal variation, a “one-minute city,” on a national scale. But the most vocal proponent of the concept at scale remains Paris, where the concept originated. While it’s not a silver bullet, Moreno, scientific director and professor at Panthéon-Sorbonne University, and Paris City Hall’s special envoy for smart cities, remains optimistic, saying “We must use 15-minute cities to focus on the common good. With
enough funding and support, deployed in the right way, we can guarantee they are for the people.”

So why shouldn’t Midtown Manhattan seriously consider a makeover into a 15-minute neighborhood? Relative to most cities in the US, New York is uniquely well-suited for this approach, since it is made up of urban residential neighborhoods where many already live, shop, and socialize, walk and bike from home to local shops and restaurants and schools, and live without cars.

If people can no longer commute long routes, the city could be bold and intentional about planning its neighborhoods to encourage hyperlocal living and working, where possible. Midtown, in addition to having ample work space, already has the advantage of proximity to Central Park, cultural institutions like Carnegie Hall, MoMa and the Met—and of course, Times Square, Broadway and all of downtown within walking distance. Of course, it’s not enough to transform available spaces into housing; the concept should include high-quality grocery, health facilities, child care, schools and other necessary amenities, and make high-speed, public Wi-Fi ubiquitous.

The long-term effects will be a place that attracts people who truly love city living and are looking to have a true, all-inclusive neighborhood experience—these people don’t want homogeneity, can tolerate a little chaos and aren’t afraid of other human beings (at a socially acceptable distance).

No matter what route Midtown decides to pursue, the road to some semblance of normal is going to be long and bumpy. But let’s not forget: New York survived the late ’70s, when everybody thought the city was over because of rampant crime and the city was near bankruptcy; it survived the market crashes of ’87 and ’89, the dot-com crash of the 2000s, 2001’s terrorist attack; and the aftershocks of the great recession.

So this too shall pass. And Midtown will rise again.