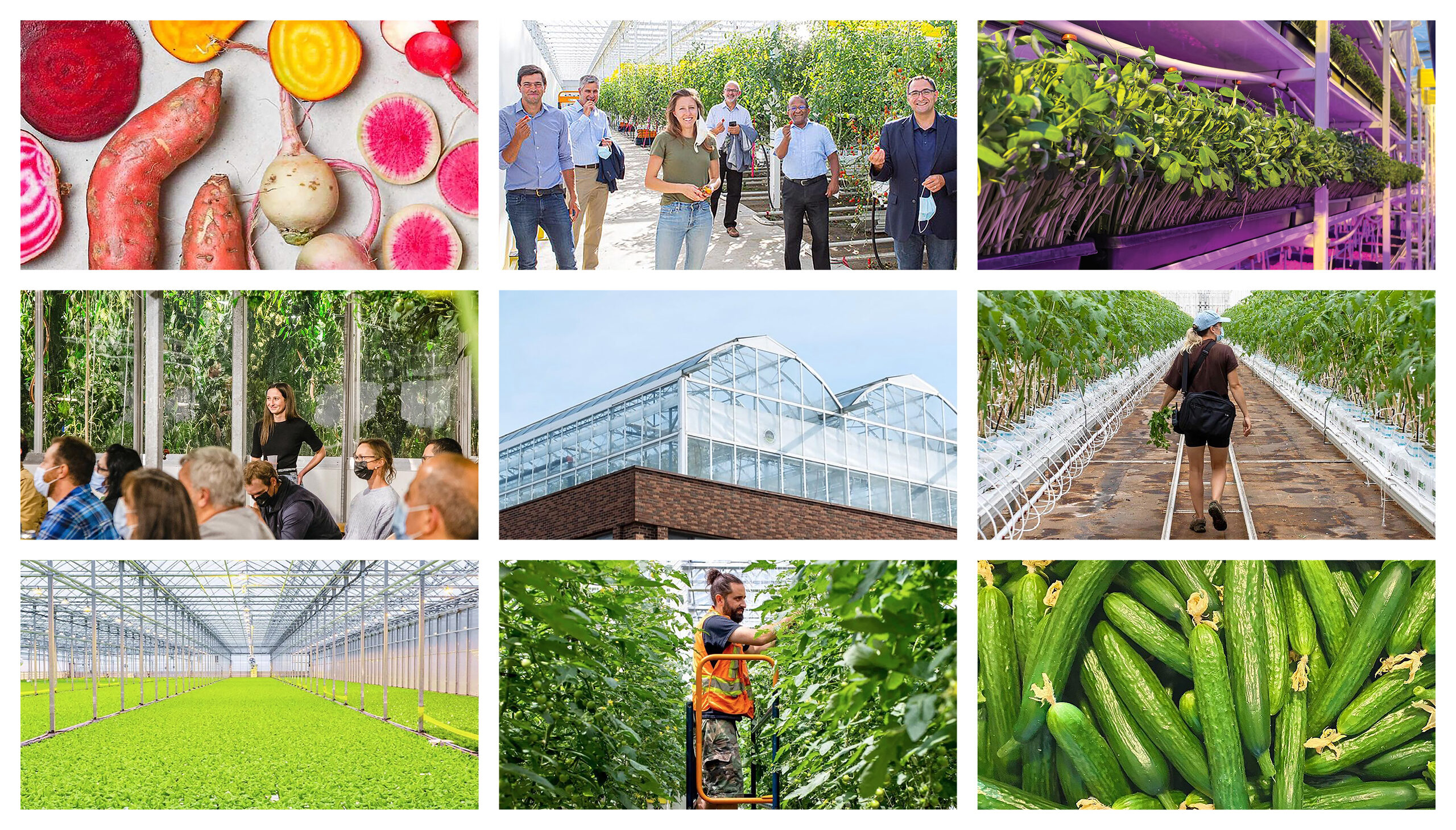 The Hanging Gardens of Babylon are one of the Seven Wonders of the World. It is said that King Nebuchadnezzar created the gardens in the sixth century BC to please his wife, who missed the countryside of her homeland. If the gardens existed, which is still up for debate, they would have required 8,200 gallons of water each day, a true technical feat.

Green roofs were used in Scandinavia as early as 1,000 BC. Houses were fitted with sod roofs that included substrates and water-retaining membranes made from birch. These roofs survived the harsh winters while also fully insulating the structure from the cold. Reconstructions of Norse sod houses dating from 1,000 AD are protected as a UNESCO World Heritage Site in L’Anse aux Meadows, Newfoundland, and commemorate the earliest known European settlement in North America.

The oldest roof garden still in existence, Guinigi Tower, was built in the 14th century. Located in Lucca in the Italian region of Tuscany, it rewards a climb of 230 steps with the sight of seven majestic oak trees, each planted for the seven sons of the Guinigi family.

Clearly, green rooftops are nothing new. Nowadays, Germany is the leader in green roof implementation. During the oil crisis of the 1970s, West Germany explored lightweight adaptations of sod roofs as a way to conserve energy. At the turn of the 21st century, approximately 10 percent of new construction in Germany had a green roof, and the number has since doubled.

In the last decade, attention has turned to rooftop farming—once you’ve greened the rooftop, why not grow vegetables? Also poetically called living rooftops, the farms are sprouting in cities around the world. New York Sun Works, a non-profit organization that promotes sustainable urban farming, estimates that if farms were installed on New York City’s 14,000 acres (!) of unshaded rooftops, harvests could feed 20 million people.

If feeding people is the most obvious purpose, it is far from the only reason for rooftop farms. Research from the Johns Hopkins Center for a Livable Future found that aside from supplying food, urban farms can offer uplift, providing not only access to healthier living, but a deeper understanding of nutrition and how food distribution works. Small wonder that most farms have educational programs to initiate schoolchildren as well as university students. Citiponics, a vertical growing system that started on the roof of a parking lot in 2015 and now has infrastructure in Singapore, Malaysia and China, says it’s intention is to “not only grow locally produced vegetables productively within the constraints of urban space, but to also provide education for the future generations of youth leaders on the importance of sustainable farming.”

Rooftops of varying scales around the world are being taken over by this green revolution: the first Danish rooftop farm, ØsterGRO, is located on an old car auction house in the heart of Copenhagen; the largest urban rooftop farm is being created on top of one of the halls at the Porte de Versaille Convention Centre complex in Paris; and the Boston Medical Center Rooftop Farm supplies fresh, local produce to the hospital’s patients and cafeterias. In New York,
Brooklyn Grange operates the world’s largest rooftop soil farms in NYC, a total of 5.6 acres of farms across three locations, with 135,000 square feet of cultivated area that produces more than 100,000 pounds of organically grown produce per year. Asia’s largest urban rooftop farm is on Bangkok’s Thammasat University roofs; its 75,000-square-foot space mimics rice terraces in the north of the country.

The vast majority of these farms are dormant in winter. But that doesn’t mean that local agriculture and short food supply chains are out of reach during these months—that’s where greenhouses come into play. And the best example is Lufa, whose rooftop farms, the largest in the world, are located near Montréal, Quebec, one of the world’s coldest and snowiest major cities. 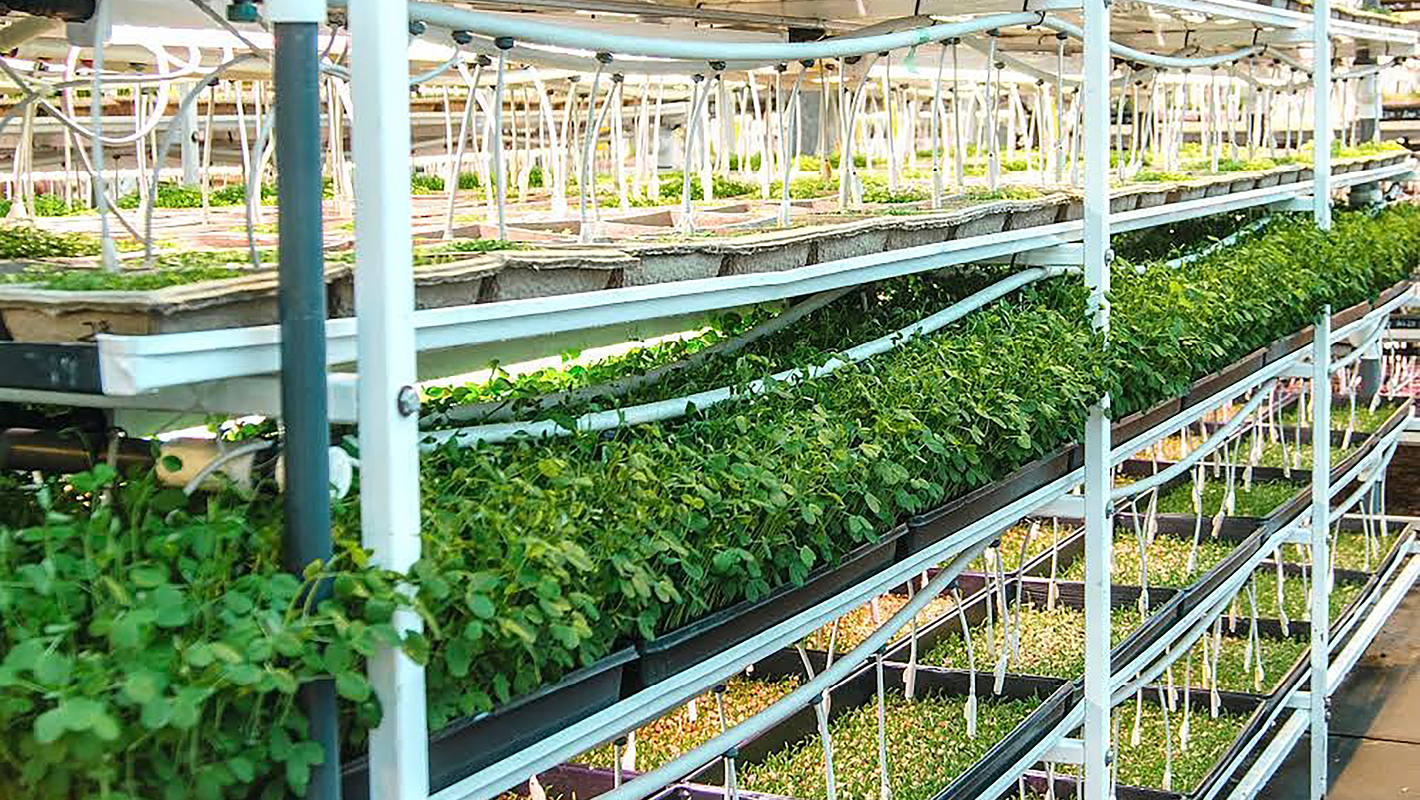 ABOVE
LED lights help produce microgreens even on the coldest days

Lufa was co-founded in 2009 by Lauren Rathmell and Mohamed Hage; their ambition was to change the way people eat by growing food where they live and growing it more sustainably. Mohamed, who grew up with locally grown fruits and vegetables in Lebanon, also longed for the taste of freshly picked produce—not the stuff that travelled an entire continent to reach him.

When they started looking for rooftops to set up their farm, people thought they were crazy. Their first farm, in the north end of the city, was the first commercial rooftop greenhouse in the world. And it worked. “We save water and reduce soil contamination,” explains Loïc Philibert-Ayotte, Lufa’s public relations coordinator. Rainwater is captured and irrigation water and nutrients are recirculated in a closed-loop hydroponic system. “Compared to ground greenhouses, our energy costs are 50 percent lower.” In addition, Lufa does not use pesticides, but fends off pests and plant diseases with ladybugs and parasitic wasps.

Twelve years after its founding, Lufa has four greenhouse farms in the Montréal area, for a total of 300,000 square feet. That includes the most recent one, launched in 2020—at 163,800 square feet, it is the world’s largest urban rooftop greenhouse.

Lufa produces approximately 50 vegetable varieties (including tomatoes, eggplants, peppers, cucumbers, herbs and greens of many, many kinds), which amount to 56,000 pounds of vegetables per week—the equivalent in weight to five elephants—or some three million pounds per year. The offer is supplemented with products from selected partners in Canada and the US, along with local farmers and food makers who share Lufa’s values of “proximity, quality, transparency and sustainability.” That includes fruits, meat, fish, dairy products, alcoholic beverages, chocolate and prepared food from meatloaf to za’atar pizza. With some 2,200 products, Lufa has evolved into both a well-curated one-stop grocery store and a thriving ecosystem.

Part of Lufa’s success can be explained through the close—verging on the passionate—relationship it enjoys with its customers, called Lufavores. The community shares the company’s values and engages with the brand through social media channels—which celebrate partners in vivid, inspiring detail—along with visits to the greenhouses, yoga and Pilates classes, and seasonal activities like preserves workshops and pumpkin carving. Lufavores will enthusiastically tell you their favorite products, a list that inevitably includes what the company calls Our Famous Cherry Tomatoes. For those in the northern climes, they are a balm for the February soul.

Lufa also participates in academic research, is involved with educational programs and has a direct giving program, where “Super Lufavores” donate money to help feed families in need. In 2021, the plan raised CDN$310,000.

To get products to customers, Lufa developed a unique distribution system. Instead of selling to grocery stores—the standard solution—Lufa delivers to over 350 drop-off points located anywhere within a three-hour radius of Montréal, or directly on people’s doorstep in the greater Montréal area. Presently, half of the delivery vehicles are electric with plans to increase the number rapidly.

Each week, more than 20,000 baskets are prepared just before being delivered. “This short circuit distribution allows us to only harvest what is needed when it’s needed,” says Philibert-Ayotte. “There is virtually no waste.”

If the pandemic forced some companies to close, Lufa saw it as an opportunity to grow. It launched seven-day service, tripled its home-delivery capacity, launched new software tools, welcomed 200 new team members—between six and 700 employees work at Lufa at varying times of the year—along with 35 new local farmers and food makers and 30,000 new Lufavores.

Many of the new customers, who came for the convenience, stayed for the quality of the local offer. In a 2021 consumer survey about online grocery stores in the province of Québec, Lufa took first place with 89 percent of respondents saying they’d recommend it for the responsible local offer and the quality of its customer service team. The survey pointed out that Lufa did not list nutritional values for its products, so the team immediately built that feature into the website.

Today, with all those rooftops and the seemingly infinite amount of produce and prepared food, Lufa feeds just two percent of the four million people in the greater Montréal region. Hage believes that with 19 commercial mall rooftop farms, the entire city could be fed. The seed that was planted in 2012 is growing fast.