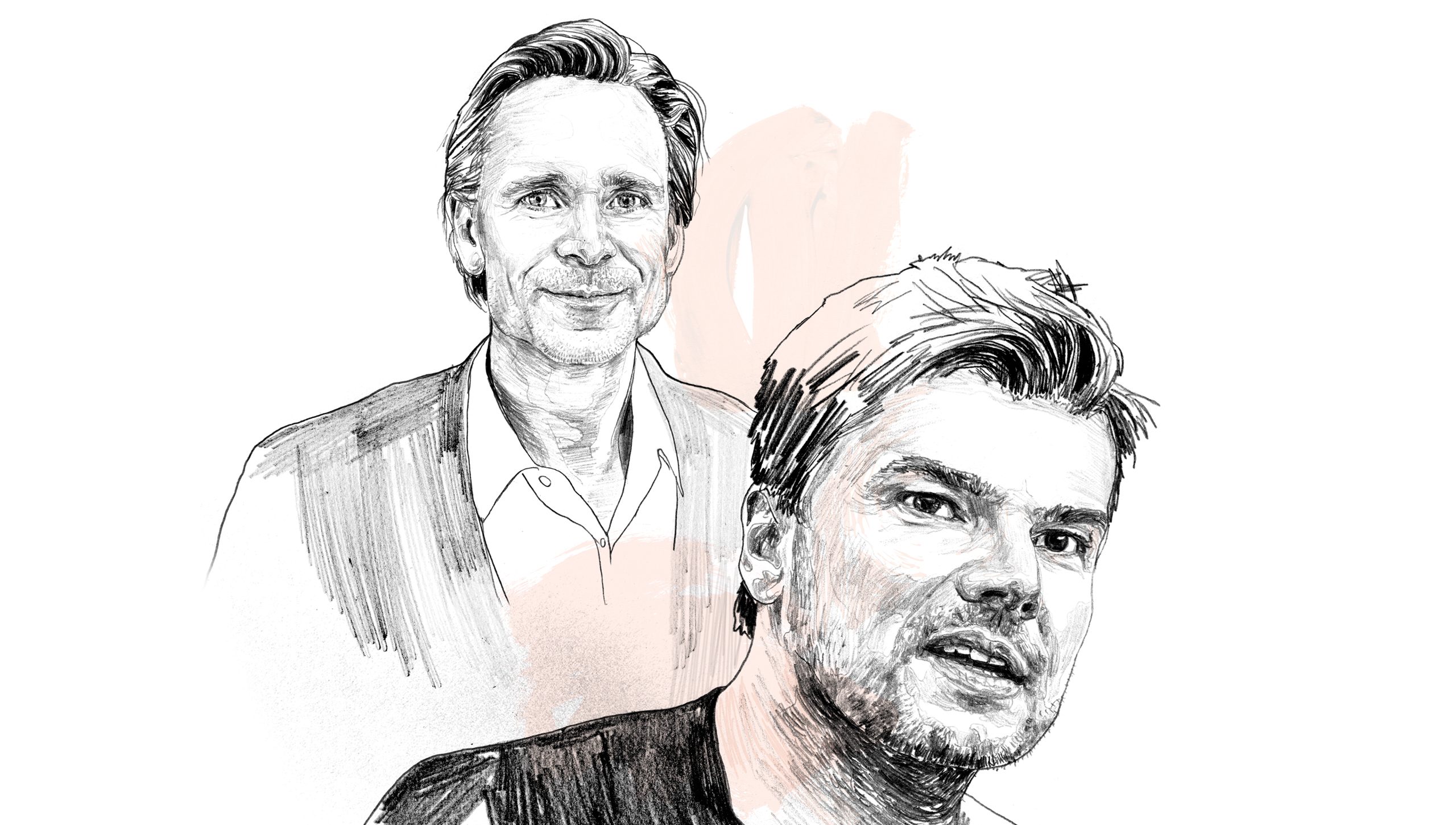 Vancouver House has forever changed the architecture of the West Coast city it calls home. Architect Bjarke Ingels and developer Ian Gillespie discuss how the impossibility of the project pushed them to create something entirely new.

If you look back, 25 or 30 years from now, Vancouver House will mark when Vancouver stopped sitting on its ass and depending on its natural surroundings
Ian Gillespie

When Vancouver developer Ian Gillespie met Bjarke Ingels in 2010, the young architect was relatively unknown outside of his native Denmark: his work for the M/S Maritime Museum of Denmark in Helsingør, the Via 57 West complex in Manhattan and the Serpentine Pavilion in London were still years away. But Gillespie saw in Ingels the right person to take on the challenge of designing an unprecedented residential building within Vancouver’s labyrinth of roads and ramps—on a tiny footprint shoehorned in by the notoriously expensive city’s gilded real estate. The result is Vancouver House, a 52-story cantilevered residential tower that twists and turns as if immortalizing its architects’ contortions, compromises and indefatigable balance to make their vision a reality and change Vancouver’s skyline forever.

The first time he visited Vancouver, Ingels recalls, he was driving across the Granville Bridge and was struck by the beauty of the urban panorama, of the slender glass towers rising against a backdrop of sea and mountains. Right where Granville Bridge trifolds, he was invited to reimagine the gateway to the city. 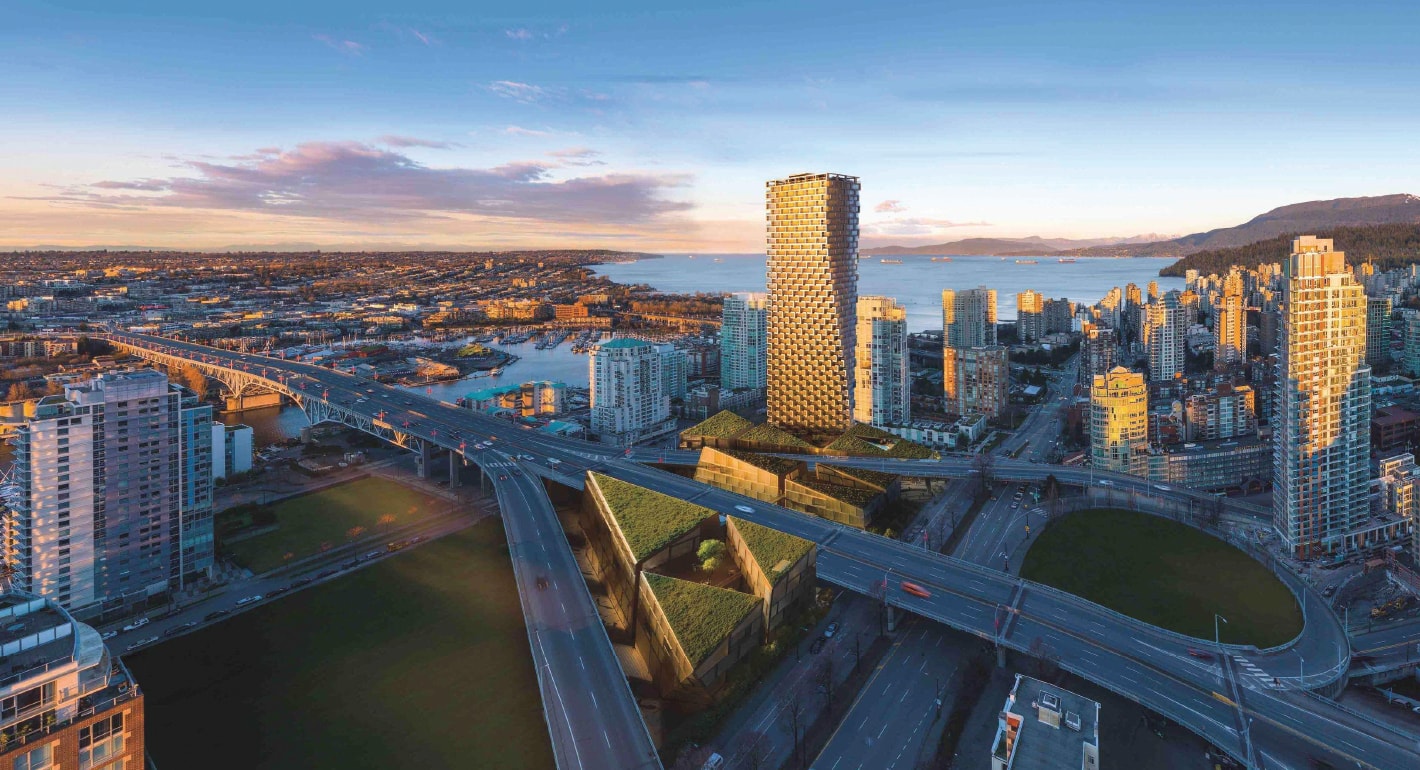 “Our buildings end up looking different purely because they perform differently,” Ingels has said of his style. Vancouver House’s expressive form is a direct response to the environment around it. The tower turned upside down rises out of a tight triangular floorplate and curves away from the bridge, gradually transforming into a perfect rectangle by the time it reaches the top.

Just as impressive as what rises into the Vancouver sky is what happens at street level underneath Vancouver House’s green carpet of grassy roofs. “In a way, you can see Vancouver House as a contemporary Canadian evolution of New York’s Flatiron that takes the residential high-rise one step further into the future,” says Ingels.

Reclaiming a part of the city that has been largely ignored until now, Vancouver House creates a street-level urban village under a canopy of bridges, a place where, in the near future, locals and visitors will gather to work, browse, eat and drink in the restaurants, cafés and shops that are set to take over three low-rise buildings with pointed edges and streamlined forms.

They will gaze up at a collection of lightbox photographs that decorate the bridge’s underpass. And they will hear the resounding boom from the Nine O’Clock Gun in Stanley Park as it punctuates a very Vancouver moment every night: one of the city’s oldest traditions harkening back to when it served as a navigation aid by which ships in the city’s harbor set their chronometers. The layering of all these experiences is part of the urban character that ultimately makes Vancouver special.

We met up with Gillespie and Ingels just months before the project was completed to talk about turning challenges into opportunities and what is sure to become Vancouver’s most exciting destination to date. 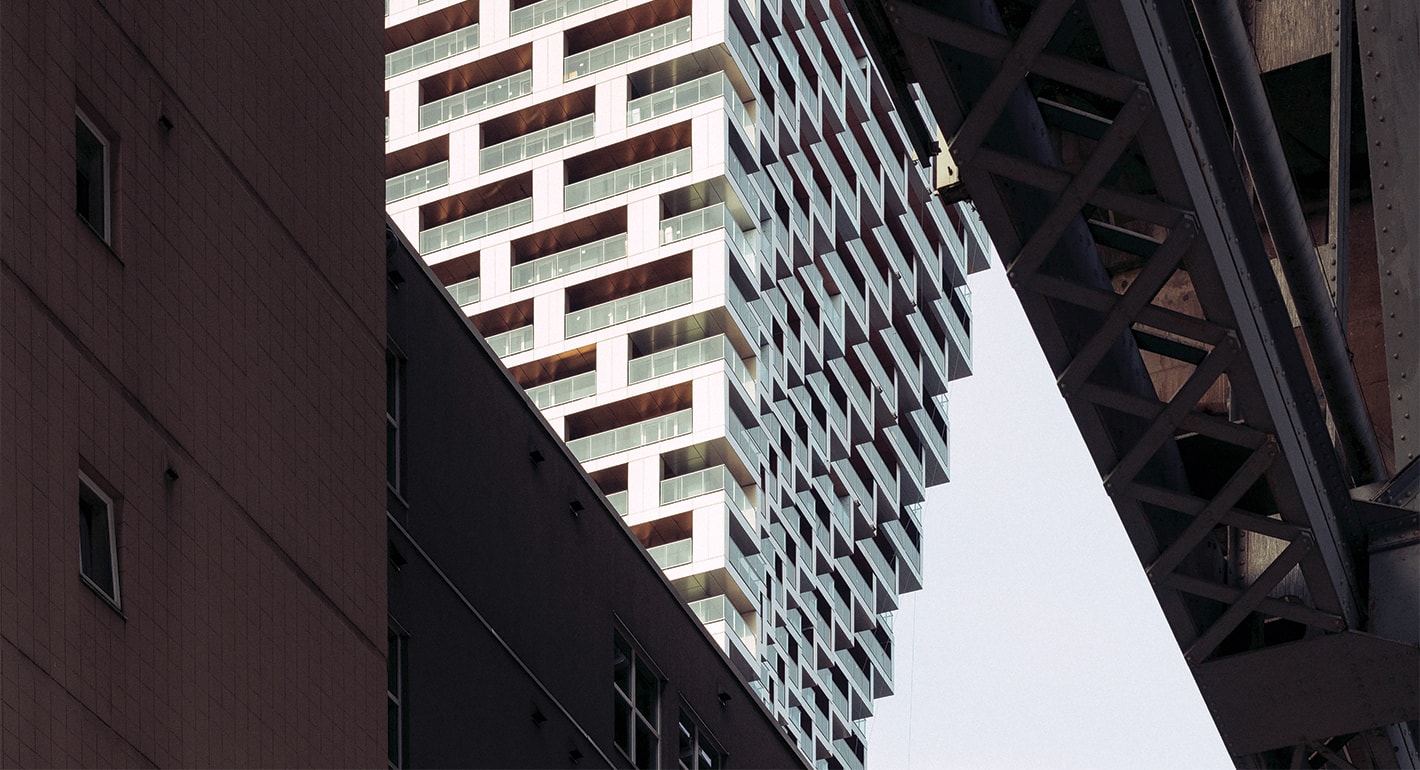 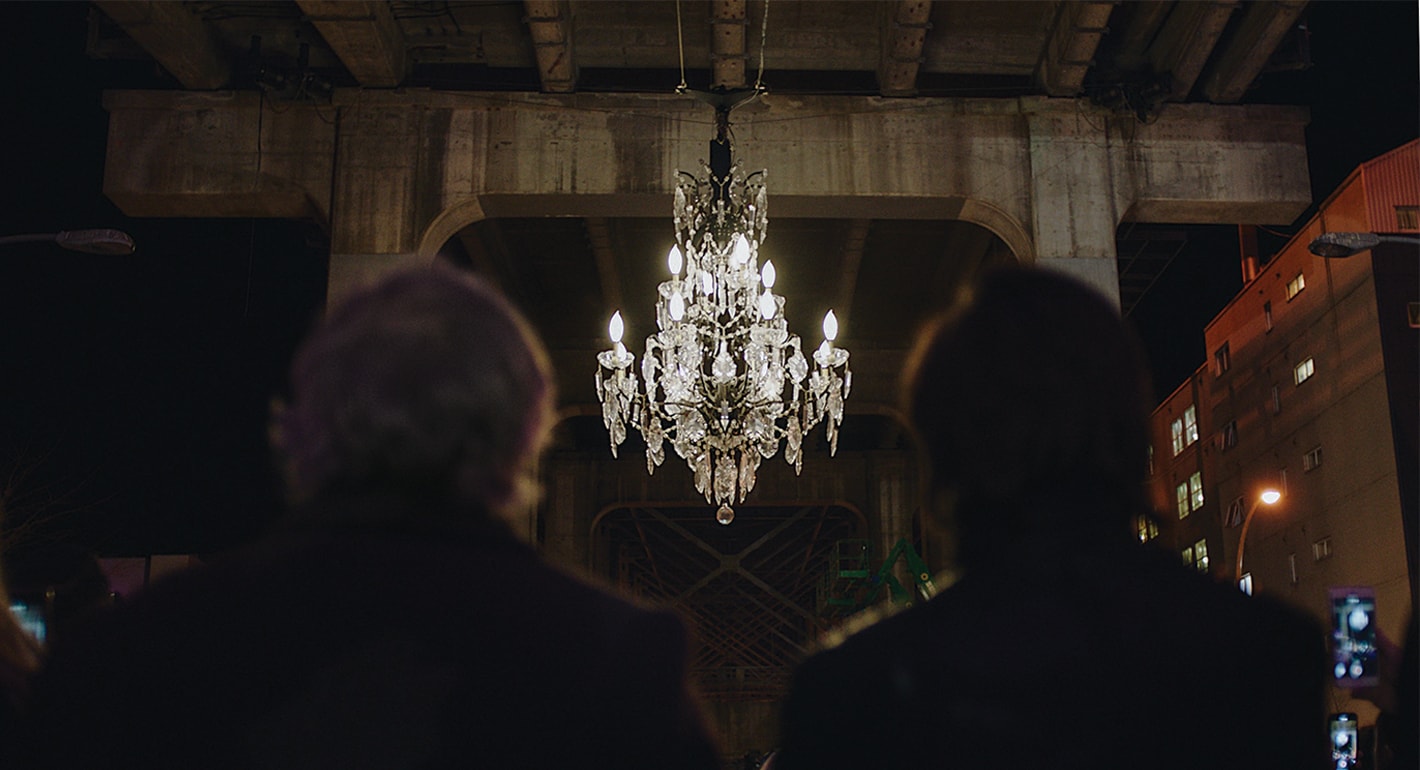 IAN GILLESPIE: When you look at Vancouver, we have these bridges that really define our downtown. But people just think of them as a transportation route—that’s all they are, right? And, in fact, the undersides of those bridges are probably places where you don’t actually want to hang out. So, we thought, let’s celebrate those bridges. And, as it happens, we have a city where it rains 40 percent of the time, so why not actually turn that from a negative into a positive and create an interesting space. If this bridge wasn’t here, Vancouver House wouldn’t be nearly as cool.

BJARKE INGELS: I think Vancouver House is a perfect example of the power of architecture. It’s hard to imagine… I mean, already now it feels like the coolest space in Vancouver. But when we came here [10 years ago] it definitely wasn’t. 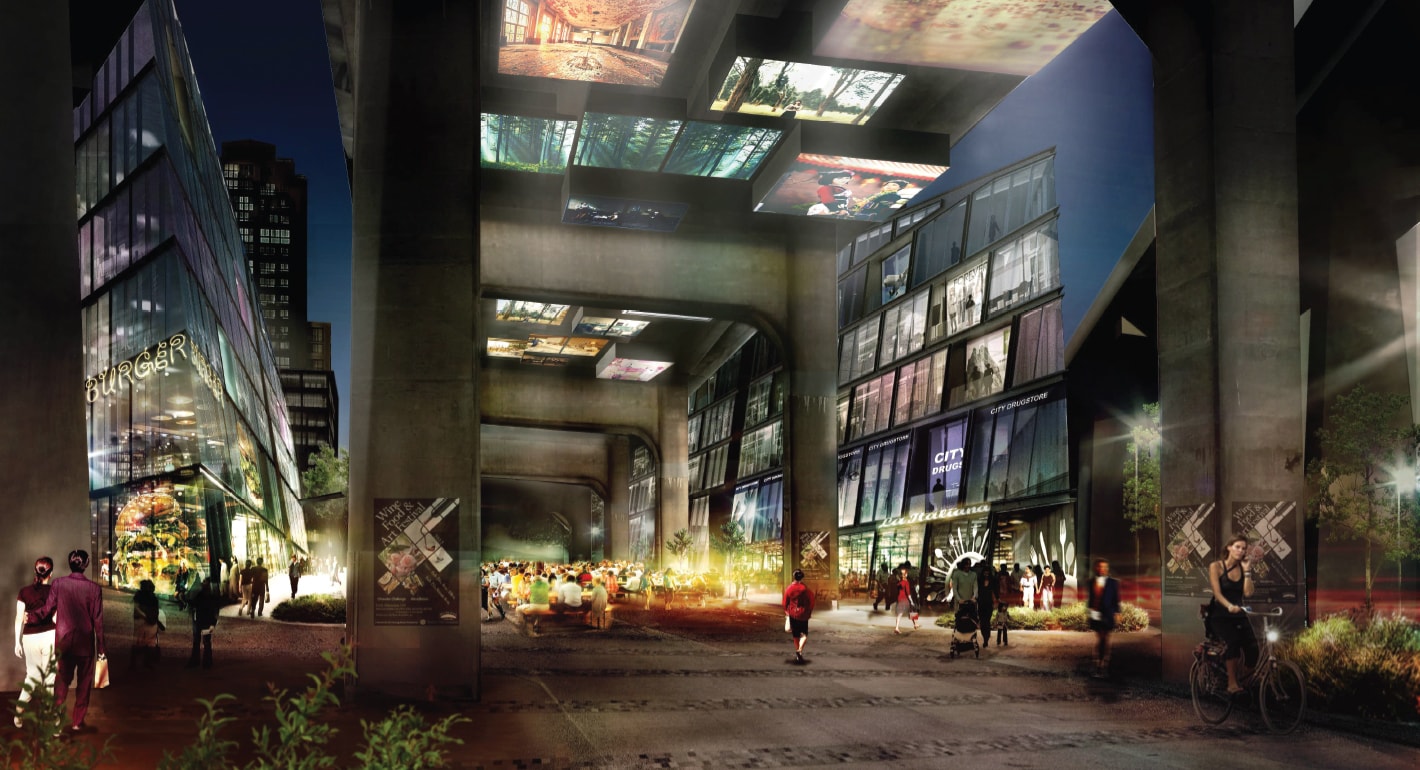 A rendering of screens under the Granville Street Bridge

IG: I think a layperson might look at the gymnastics of this project and say, “The world has got lots of twisty towers and ultimately that’s an attempt to stand out or feed an ego that needs feeding,” or they might say it’s purely marketing driven. The reality here is that everything about this project is completely contextual. If you put the variables that were prescribed, whether it was the 100-foot setback from the Granville Bridge head or the shadowing on the park or the setbacks on Howe [Street] or on Beach [Avenue], and you put all of those in an algorithm, what comes out of that algorithm is a void in space. So you think about filling that sausage skin with ingredients. That’s really what Vancouver House is. Literally every single thing about that is completely driven by that context. When you think about the shape of the building, the way to think about that is, we had this entire site but there was literally only 6,000 square feet where we could put a tower. So that was the only place the tower could be, and ultimately the only shape that could come out of all of those ingredients is this.

IG: From the very beginning, we knew that if we put a building here, we had to reenergize the street and the underpass of the bridge.

Vancouver House is a perfect example of the power of architecture.
Bjarke Ingels

BI: And I think we had a chance to really play with this idea of saying, what if the underside of the bridge is an umbrella. What if it’s a Sistine Chapel? The ceiling in train stations and churches is often this canvas that gets attention. The buildings then are just shapes. If you look at our building and you see the shapes—this kind of triangle that’s wedged between—you start understanding how the bridges have given shape to these exciting forms. When you drive over the bridge it feels like this seismic landscape of the green roofs but they’re very much shaped by the surroundings.

So what we ended up taking is all the negative side effects of the bridge and turning them into positive elements. And sometimes you have an ambition and you hope that it’s going to work.

IG: If you think about this from a planning perspective, and you think about a city as it continues to grow and it’s very confined in capacity to expand, you end up with these leftover spaces. And I think one of the things that’s really nice about [Vancouver House] is that with a little bit of creativity you can turn a leftover space into a really great space. I think that’s really exciting.

There are a lot of spaces in the city that we have maybe given up on, but you can see that, with a little bit of care they can actually become an incredible resource.
Bjarke Ingels

BI: Part of the spectacle that you get [under the bridge]— you have the cathedral space and you see the light seeping in, but when you get up, especially in the [swimming] pool building, that triple-height space at the top is right where it’s sort of like the bow of a ship separating the flow of cars. And you are in this incredible, three-dimensional dynamic space that would normally just be like a goddamn overpass but suddenly it becomes this urban spectacle. 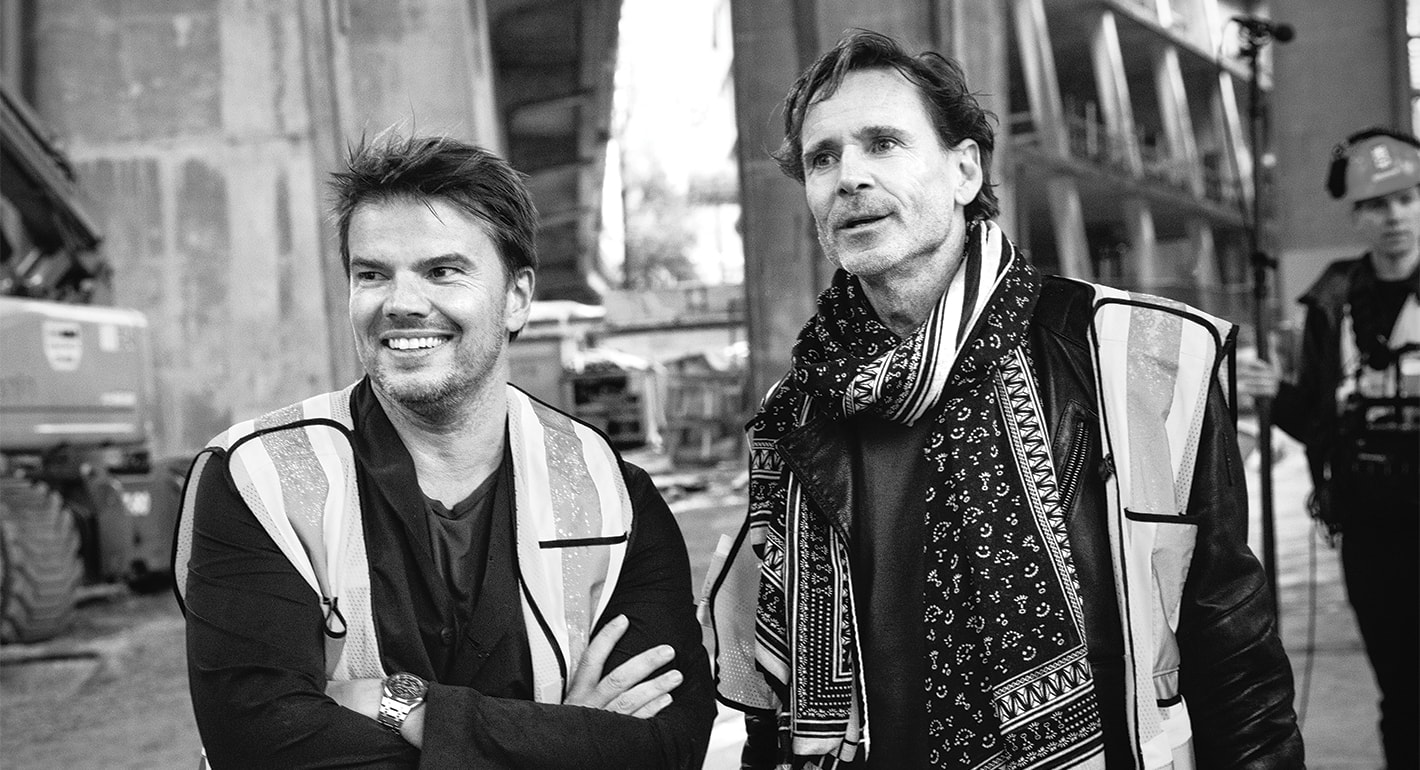 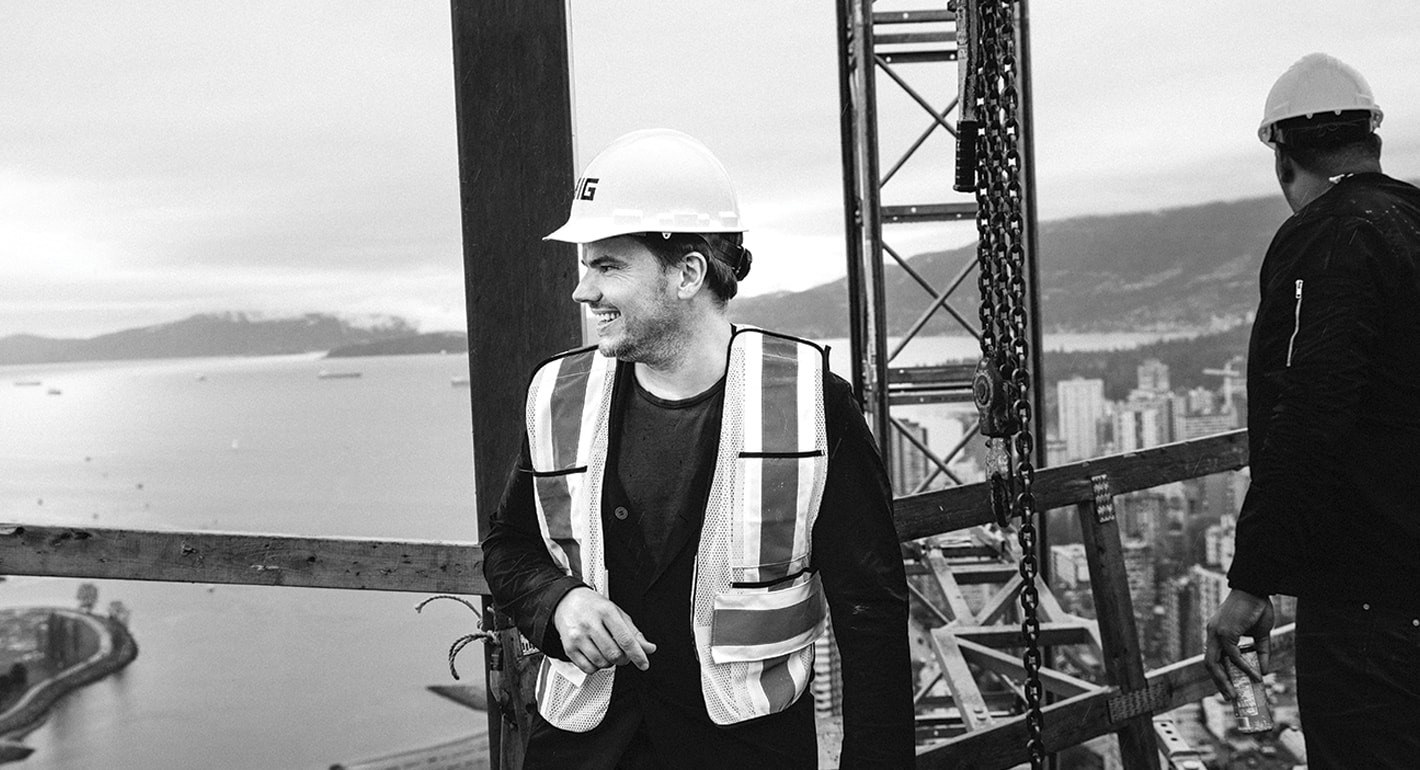 IG: We had to go to the city and explain why we thought [re-energizing the underside of Granville Bridge] is a very important thing for Vancouver.

BI: Vancouver has quite a specific style of photography, founded maybe by Ian Wallace. A lot of these Vancouver photo artists have made photos that are very, very big, and backlit almost like lightboxes. So we had a handful of ideas of what we wanted [for the underside of the bridge].

IG: I had Rodney Graham in mind from the beginning. We were looking for something that would turn this bridge into this idea that we had of the Sistine Chapel. And we had an idea of finding a piece that would energize the underpass.

BI: So we went to Rodney and we were very in love with the upside-down trees because it had the same feeling. And he showed us this video piece of a chandelier that he wanted to do. So the chandelier was his idea.

IG: When you think about really good urbanity, it’s all about layering [of experiences]. One thing that I was excited about is that we all take for granted at nine o’clock when that gun goes off. If you didn’t have that Nine O’Clock Gun, Vancouver would be lesser for not having it. That gun is a layer of texture. And the underpass of the bridge becomes another one of those layers.

BI: Standing here, I think I’ve never been more convinced of this space; it’s an example and it shows that there are a lot of spaces in the city that we have maybe given up on. But you can see that, with a little bit of care, they can actually become an incredible resource.

IG: In time this will be one of the most important monuments in our city. And I think to a larger extent Vancouver House marks a point in time in the progression of our city. Only time will be able to tell whether this is an accurate forecast, but I think if you look back, 25 or 30 years from now, Vancouver House will mark when Vancouver stopped sitting on its ass and depending on its natural surroundings and said, “Well, that’s great, but we did shit all about that. Let’s see how we can actually contribute to making our city really beautiful.”