What’s Next for Life at Night in our Cities? - Resonance Consultancy 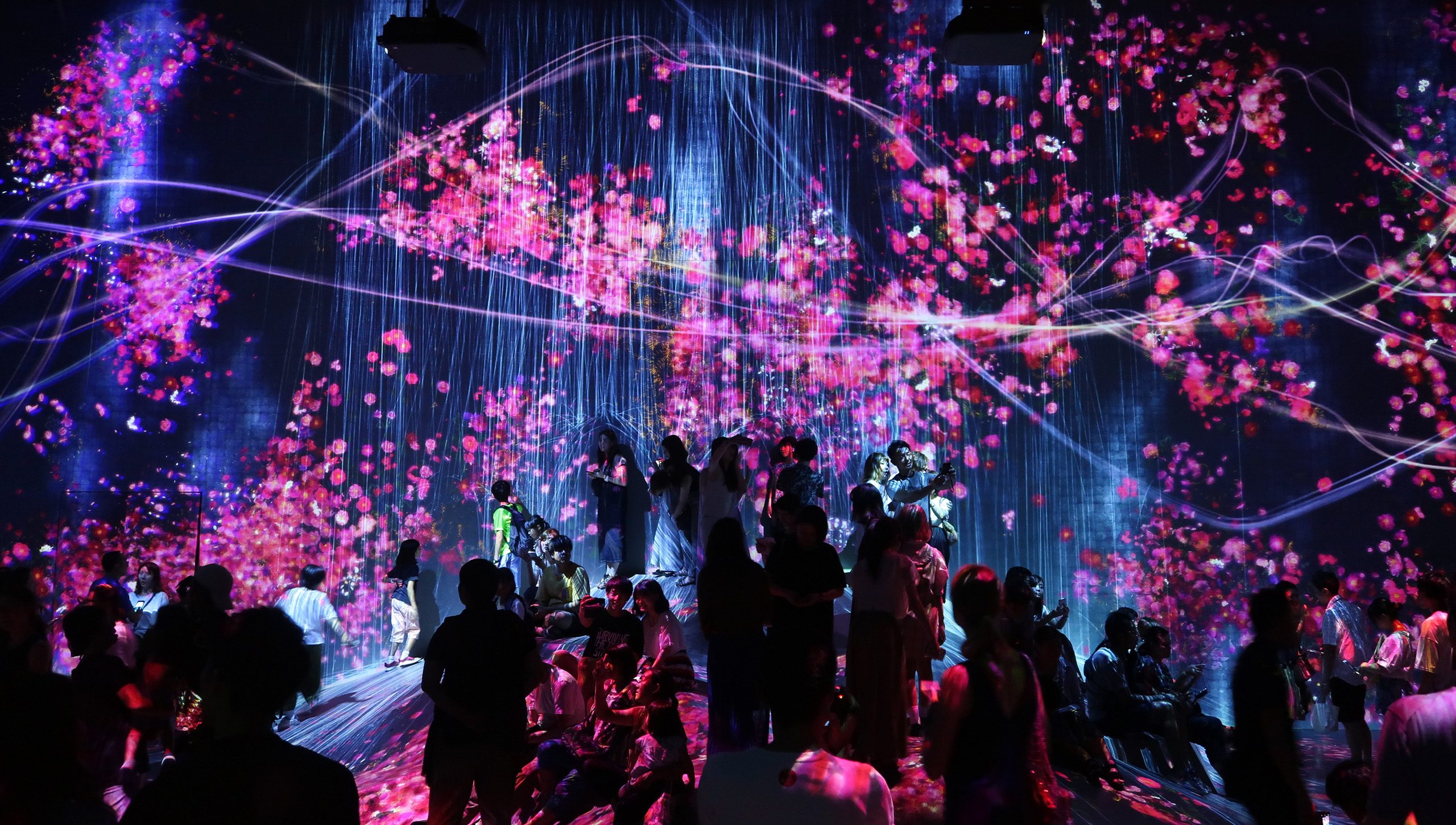 What’s Next for Life at Night in our Cities?

It’s hard to believe that it’s been a year since we were first ordered to stay home and COVID-19 took charge of our lives and our cities. Get-togethers on Zoom followed by a DoorDash-delivered dinner and an evening watching Netflix feel like a regular night out in many of our cities. But with vaccines gradually being deployed, there’s reason to be optimistic that better days are ahead and that we might one day soon go out at night again. However, life at night in our cities may look different than it has in the past.

When we think of nightlife, we tend to think of nightclubs. But with a host of social networks, dating apps and digital entertainment to choose from, many nightclubs were already struggling to survive—nightlife was being redefined long before COVID crashed the party. A study just last year in the UK found that the country had gone from having 13,505 nightclubs in 2008 to just over 8,700 in 2019—a loss of almost 5,000 venues. And that was before the pandemic.

Perhaps it was the decline of the nightclub over the last decade that awakened cities to the value of nightlife and the nighttime economy. In 2016, London created a Night Time Commission just as service was set to begin on the “Night Tube” subway service, and a Night Czar (or Night Mayor) went to work. London First and Ernst & Young found that in 2014, the nighttime economy was worth up to almost $35 billion annually, around 8% of London’s gross domestic product, and directly supported one in eight jobs—some 723,000 workers.

“London’s culture and nightlife, from our theaters to our music venues, is iconic around the world,” said Mayor Sadik Khan when the Night Tube opened. “With the Night Tube, more people will be able to experience London’s unique cultural scene, making a substantial and vital contribution to our city’s future economic prosperity, and sending out a signal that London is truly open.” He added, “It will unlock the full potential of London’s nighttime economy, and will be a huge driver in creating jobs and supporting hundreds of businesses in our city.” 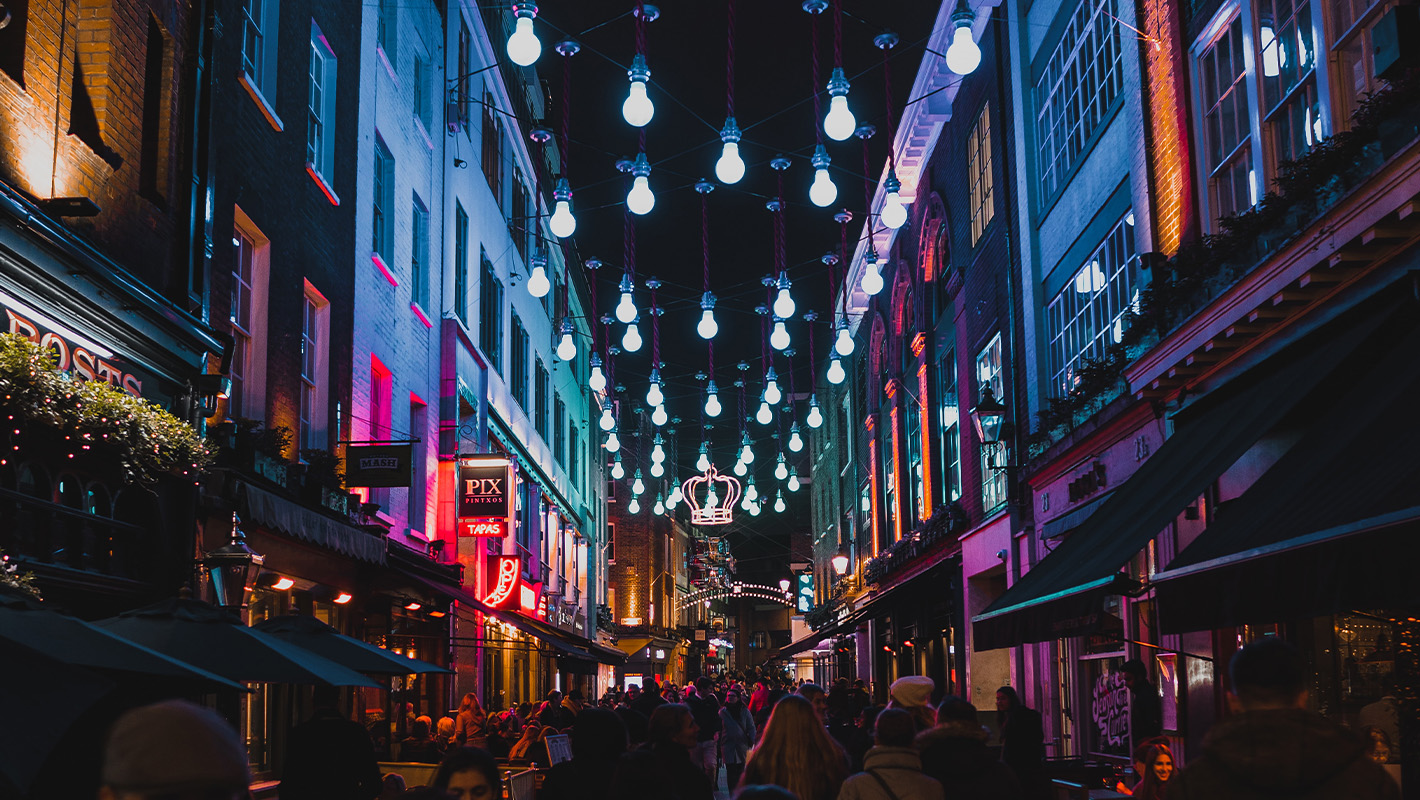 But the importance of nightlife to a city isn’t just about the jobs and direct economic impact it creates—it seems to have a strong relationship with attracting investment and other jobs to a city, too. At Resonance, we’ve collected and analyzed data for more than 400 cities over the past six years to create our annual World’s Best Cities rankings. In research we’ve done on the urban economies of U.S. cities, we were surprised to discover that the number of recommended nightlife experiences for a city on TripAdvisor has one of the highest correlations with the number of jobs created by foreign-owned enterprises—second only to the number of Fortune 500 companies that are headquartered in a city. So what does nightlife have to do with foreign investment? Obviously, correlation is not causation, but this data suggests that there is a strong relationship between the vibrancy of a city and where international companies are choosing to invest. And vibrancy is more than a 9 to 5 affair.

Unfortunately, our cities have never been less vibrant than they are now. In New York City alone, almost a half million people worked in leisure and hospitality businesses prior to the pandemic. By the end of 2020, almost half of them had lost their jobs and countless businesses had closed…for good. To be sure, many of our favourite bars, restaurants and theatres won’t be waiting for us on the other side. But a restart is also an opportunity for reinvention—for a new generation of entrepreneurs and innovators to take their place and for the city to rethink the very definition of nightlife and entertainment. The question is, what do we want our nights to look like? 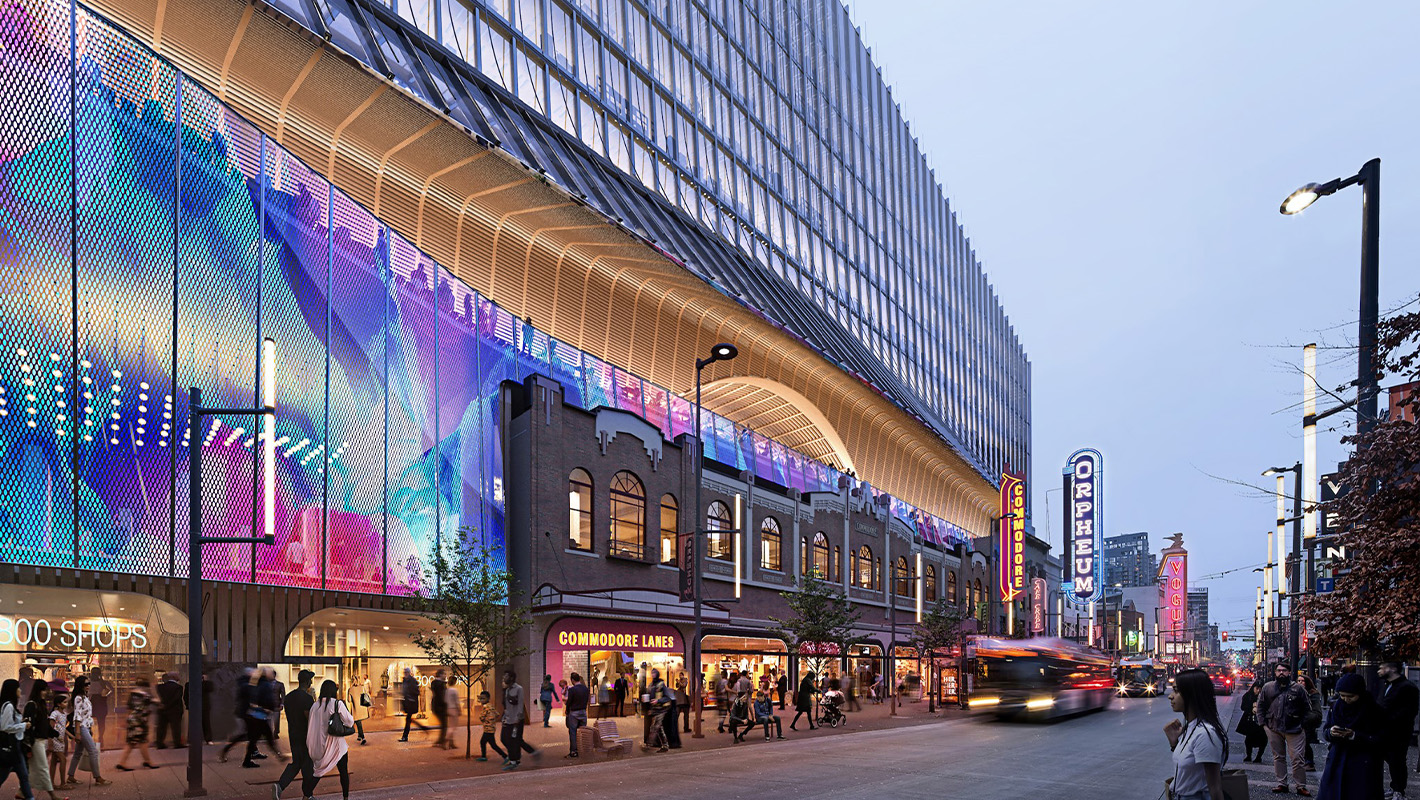 In Vancouver, our team at Resonance has been working with the Downtown Vancouver Business Improvement Association to reimagine Granville Street, a historic main street that is home to many of the city’s nightclubs. It was also home to the highest commercial vacancy rates in the city, a situation that has worsened as a result of the pandemic.

The proposed strategy for the street involves increasing permitted density in order to stimulate development of office space and other uses in order to create a district that is alive day and night: making places that thrive during the day is key to ensuring they survive at night.

In Calgary, we’re working with the Calgary Municipal Land Corporation to create a new Culture + Entertainment District that will do just that. While plans for the district were created before the pandemic, the vision for The C+E reflects in many ways what the future of nightlife might look like around the world—it’s not designed specifically for nightlife at all. Instead, it’s a mixed-use neighbourhood designed for people to live, work and play in.

A place where locals and visitors come together is key; with nightclubs on the wane, a neighborhood can’t sustain itself on entertainment alone and needs to be useful and enjoyable day and night. By combining entertainment venues such as the city’s famed Stampede Park and a new convention center, housing, shops and restaurants, The C+E is designed to be a vibrant place to be throughout the day, the week and the seasons. 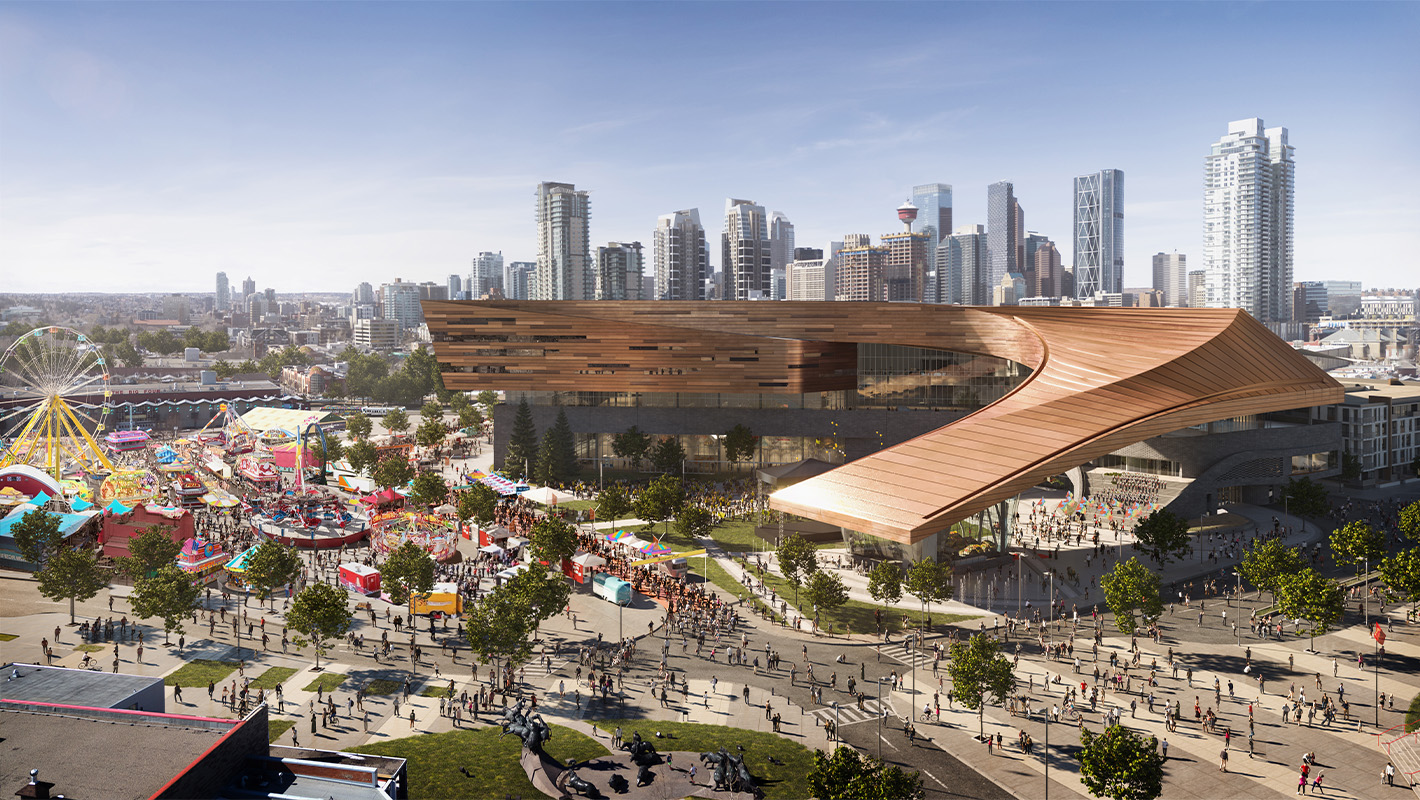 One of the best examples of combining elements like these together to create a thriving entertainment district is in Nashville. “The District” features a strip of historic honkey-tonk music clubs, a 17,000-seat arena that’s home to the NHL’s Nashville Predators, a 2 million square foot convention center, as well as hotels and a growing amount of residential and office space—all within walking distance of each other. Since breaking ground on the convention center in 2010, the residential population of downtown has grown from 5,000 to 13,000. More importantly, the greater Nashville area economy has grown by 60%. To be sure, there were other factors at play in Nashville’s meteoric rise, but its success certainly aligns with the relationship we’ve identified between vibrant nights and economic investment and job creation.

If the pandemic has taught us one thing, it’s that all the technology in the world can’t replace the value of in-person connections—right now we’re starved for it. And if more of us are working remotely in the future—whether it be from home, the countryside or a city abroad—individuals, families and companies will need places like The District in Nashville to gather together to slake our thirst for connection more than ever before.

As we begin to contemplate our post-pandemic lives, a transformation of our night lives may be one of the most interesting and significant changes wrought by COVID. If the UK lost almost 5,000 nightclubs in the decade leading up to the pandemic, how many more did it lose after a year of forced closures? And what will take their place? As vaccinations gain speed and restrictions are eased, demand for nighttime experiences in our cities is likely to soar, sparking new innovations in entertainment and hospitality. The lines between physical and digital, food and beverage, culture and entertainment—indeed, between day and night in our cities—are blurred and blended together. Cities need to ensure that antiquated regulations and zoning don’t get in the way of this creative revolution. Like it or not, nightlife as we knew it is over. The health and prosperity of cities depends on something new and interesting taking its place. And if we achieve that in the wake of this crisis, that would be something to celebrate indeed.