The Future of Cities is Flat - Resonance Consultancy 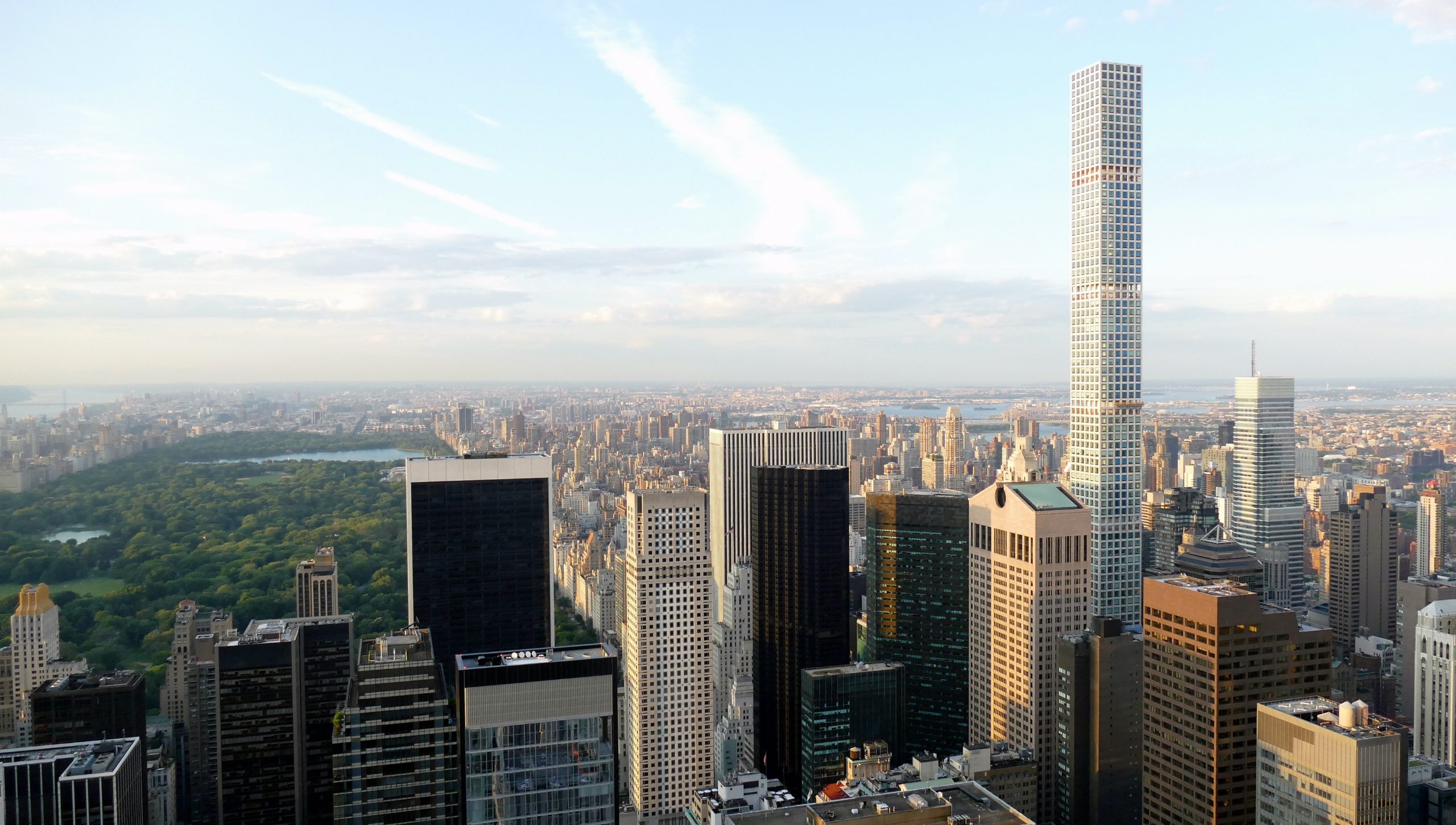 The Future of Cities is Flat

Step into one of the elevators on the street level of 432 Park Ave in Manhattan and you may find that the weather has changed when you step out. At a height of 1,396 feet, 432 Park Ave is the tallest residential tower in the western hemisphere and the second tallest building in all of New York City. On a clear day, the views from homes on the highest floors of the building are akin to those of flying over the city. But when it’s overcast, there are often no views at all; the top floors are enveloped in a pall of clouds.

Designed to cater to so-called “Ultra High-Net Worth” buyers who could afford to spend upwards of $20 million on a home in the city, 432 Park Ave defined a whole new category of “supertall” development in New York in the years leading up to the pandemic. Developers sought to maximize the buildable area of the few remaining developable sites left in Manhattan and, in most cases, the city was happy to oblige. For many, these supertall towers symbolized the growing gap and inequality between the richest and poorest residents of the city. But they also symbolized rising inequality between cities themselves and a growing trend towards the concentration of wealth among a handful of “superstar” cities. For example, New York City makes up just 1% of the U.S. population, but accounts for 8% of the country’s entire GDP. In the U.K., London accounts for 14% of the country’s population but 23% of its GDP. In fact, a study by consulting group McKinsey in 2018 estimated that the economies of just 50 superstar cities representing 8% of the world’s population were responsible for 21% of global GDP.

Yet in many countries, it is these star cities that have been most impacted by COVID-19. With the means and opportunity to work remotely, wealthy and mobile residents in cities like New York, London and San Francisco decamped to smaller towns, resorts and sunnier climes at the onset of the pandemic. A recent analysis of postal records by CBRE in the U.S. found that urban centers across the country had 15% more move-outs in 2020 than in 2019, with cities like San Francisco, New York, LA and Seattle showing the biggest declines. Where did they go? Sun-belt cities were the biggest winners, with net move-ins growing the most in Austin, Charlotte and Dallas. Data from the U.S. Department of Labor tells a similar story, with the labor force in New York, LA, Boston and Miami all shrinking by more than 4% in 2020, while Austin, Nashville and Denver grew slightly. But for the most part, the majority of people who left New York or San Francisco didn’t move very far, relocating to nearby communities within their regions— like Hudson in New York state, or Sacramento in California.

The question now is whether this is the beginning of a long-term shift away from the centers of superstar cities to the suburbs and smaller metros, or merely a short-term move away from some of our most densely populated urban centers. The answer, it would appear, is both. 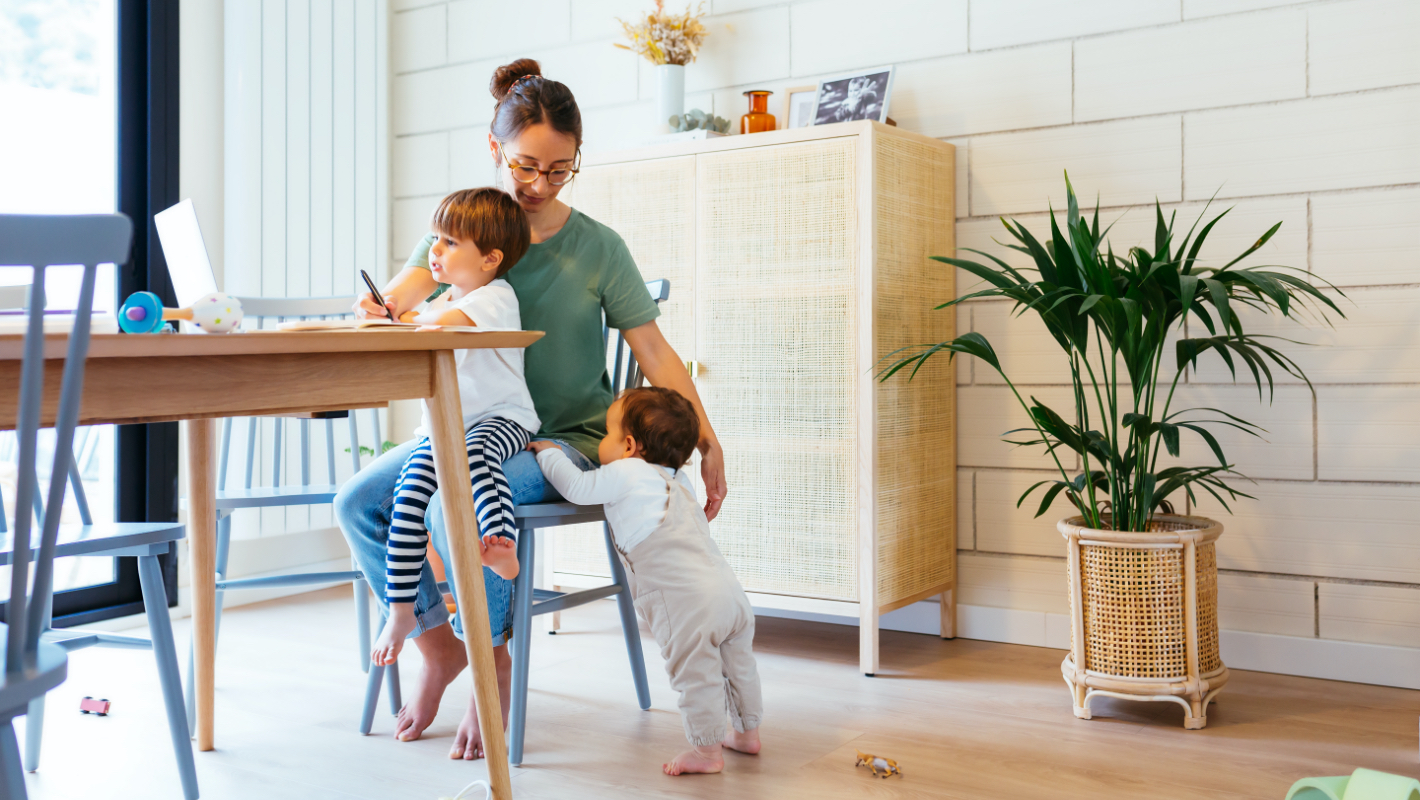 Move Out, Move Over

First, the population of large cities like New York, LA and San Francisco were declining in the years prior to the pandemic, with hundreds of thousands more people moving out than moving in three years in a row. The pandemic didn’t create a new trend—it accelerated one that was already picking up steam. Millennials, the largest demographic cohort in the U.S., were already growing up and trading roommates and studio apartments in city centers for more spacious and affordable family-friendly digs in the suburbs and other metros well before the pandemic started.

To find out what Millennials are looking for in a city now, Resonance conducted a survey of our Best Cities report readers aged 25-34 and asked them what they consider most important in choosing a city to live in now. Here’s what they told us:

While the pandemic may have caused respondents to put a greater emphasis on parks, outdoor activities and healthcare than they may have in the past, it wasn’t enough to displace what they consider most important—job opportunities and an exciting city environment. These factors have always been the strength of places like New York, London and LA.

The problem for superstar cities like these isn’t really that people’s priorities have changed as a result of the pandemic, it is that there is a shrinking pool of 25-34-year-olds to attract in the first place. Based on the most recent population estimates by the U.S. Census Bureau, there were 44.9 million people aged 25-34 in 2020. Barring significant immigration, that will drop to 41.6 million 25-34 year-olds by 2030, based on the number of 15-24 year-olds there are today—a decline of up to 3 million young people and a return to about the same number of 25-34 year-olds as there were in the U.S. in 2010.

Based on what our 25-34 year-olds tell us is important to them today, it’s easy to see why cities like Austin, Denver and Charlotte are on the rise. They are the Goldilocks of cities, offering a not too hot, not too cold, just right mix of relative opportunity, vibrancy and affordability with access to significant parks and outdoor recreation. They were attracting talent before the pandemic and will continue to do so for the foreseeable future. 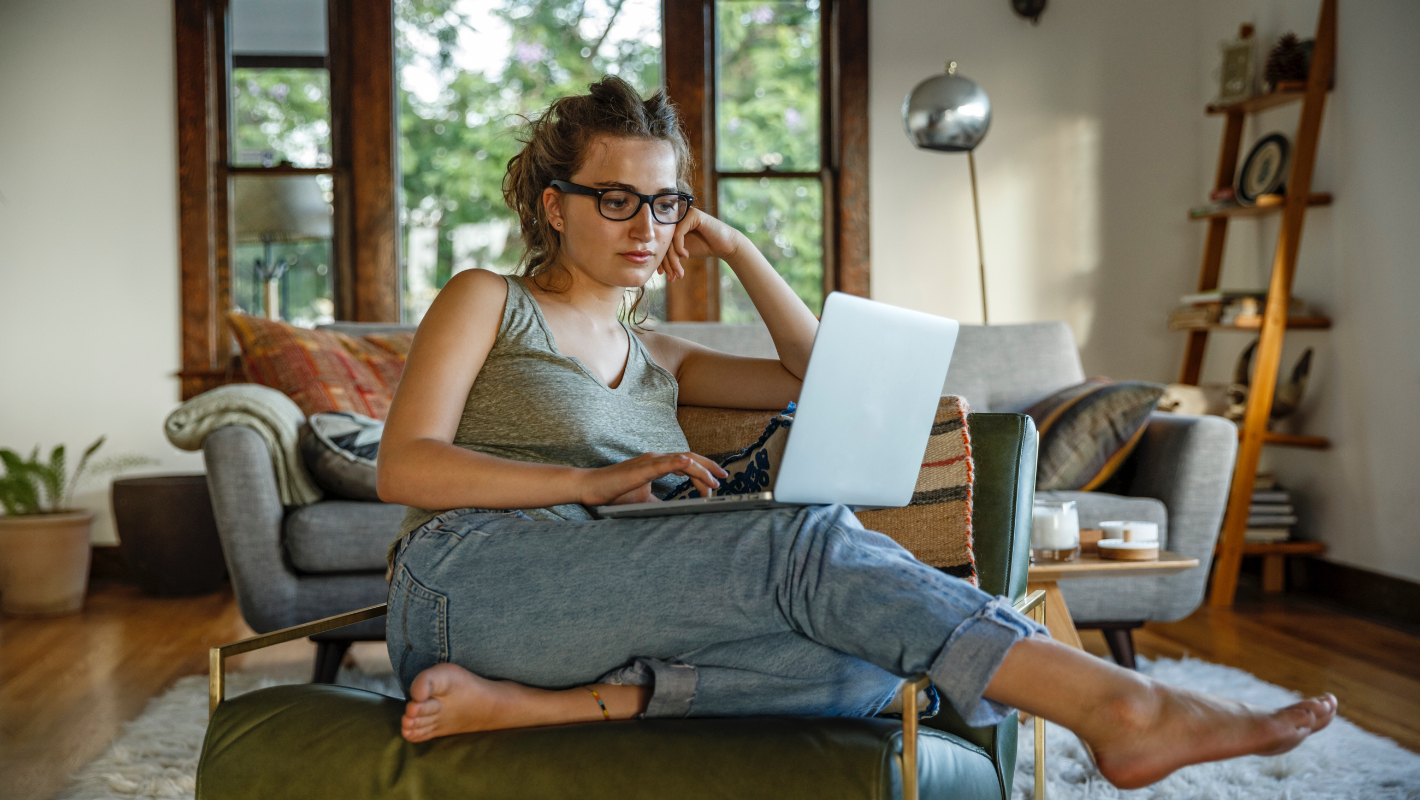 The most significant pandemic-related effect on our cities has less to do with migration between cities and more to do with changes in how we live and work in the cities we call home today, whether it’s Austin, Atlanta or Albuquerque. While the vast majority of urban residents and office workers will return, patterns of both consumption and production will change as a result of our year-long experiment with working remotely, and this will be the most significant long-term effect of the pandemic.

Surveys of office workers show that, on average, they would like to work from home 1.5 days per week after they return to the office. That may not sound like much at first blush, but it could amount to 30% fewer trips on transit into the city, 30% less spent on lunches and dinners out after work in restaurants, and 30% fewer visitors to stores in these urban centers. The economic impact on a city’s central business district could be significant. For example, a recent study by Simon Fraser University for the Vancouver Economic Commission estimated that the downstream impacts of remote working could shift as much as nearly a $1 billion in spending by office workers away from retail businesses and restaurants in Vancouver’s central business district. The corollary of this is that spending in suburban areas and edge cities is likely to go up. This will flatten what had become a very spiky concentration of both consumption and production within the centers of most metropolitan areas.

While this shift will have a negative impact on downtowns and city centers, it may offer the upside of reducing congestion and the need for investment in more transportation infrastructure. These funds could eventually be redirected towards schools, libraries and recreational facilities that enhance and improve quality of life for everyone in the city. 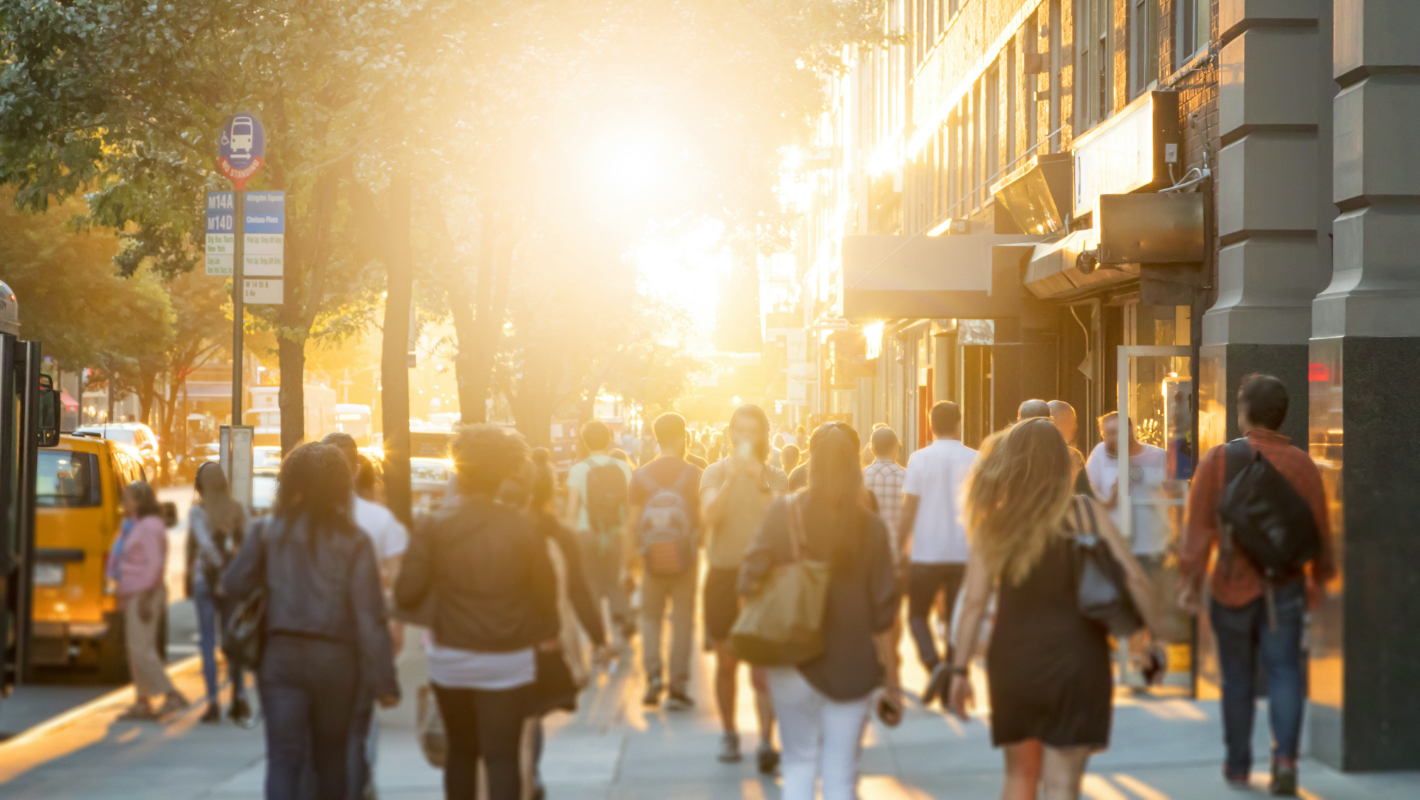 This is the very premise of the much-popularized 15-Minute City concept—living within a 15 minute walk, bike or transit ride to everything you need to live, work and play in your life. Most city centers offer all of this, but suburban areas typically do not. In the U.S. and Canada, suburbs are often the opposite of a 15-Minute City, requiring a 15-30 minute drive in a privately-owned automobile to do most of these things. If the revitalization of our city centers was the biggest trend in urban development over the last 20 years, the next 20 will be defined by the urbanization of the suburbs as we seek to enhance affordability, walkability, diversity and employment in these areas.

Making this possible will require a new level of regional planning and coordination between the patchwork of municipal jurisdictions that make up a typical metropolitan area. Edge cities will be tempted to capitalize on the misfortunes of city centers, but in doing so they will repeat the mistakes we’ve made in the past. Only by working together can we capitalize on the flattening of our urban economies and shift from a hub and spoke model that amplifies inequity to a more cooperative mesh network approach to urban planning that enhances equity, inclusivity and accessibility within a metropolitan area.

The pandemic has been costly both in human and economic terms. But it has the potential to be a disease that cures some of what ails our cities—one that takes from the haves and redistributes to the have-nots while reducing congestion, pollution and the cost of housing in our urban centers. A flatter city will, by its very nature, be more equitable, accessible and inclusive. Instead of building towers with our heads in the clouds, the next era of city building and planning can be defined by those with their feet firmly planted on the ground—who’ll capitalize on the opportunity in front of us to create more complete communities and cities for us all.