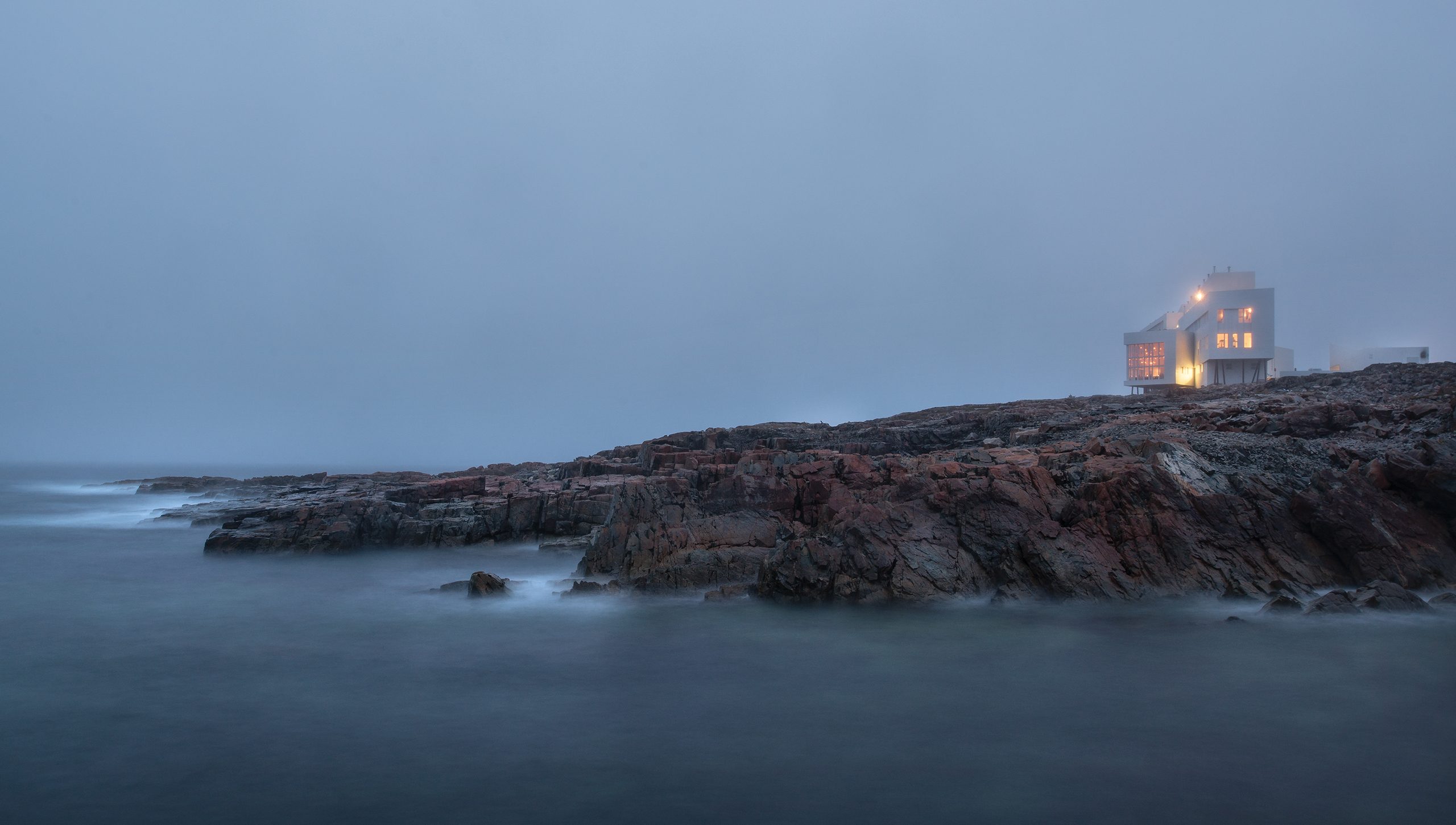 Todd Saunders’ favorite table in the dining room of the Fogo Island Inn is in the back corner. Sited so as to create a sense of being cantilevered over the ocean below, the dining room offers panoramic views of the moody Atlantic and the ever-shifting skies above it. But as the architect of the hotel, Saunders is more interested in a different view—that of the people inside the room itself.

“I like to sit in the back—kind of like the gunslinger’s position, seeing the whole thing,” says Saunders. “It’s an amazing feeling to sit in a building where people from everywhere in the world come—very, very interesting people because it’s very, very hard to get here.”

His designs on this island in a remote corner of Newfoundland have won him accolades and recognition from around the world since the first of his series of artist studios opened in 2009, followed by the hotel in 2013. The Inn redefined not only Fogo Island as a destination, but also all of Newfoundland in the eyes of affluent, experience-seeking travelers. It also very much defined Saunders himself as an architect. 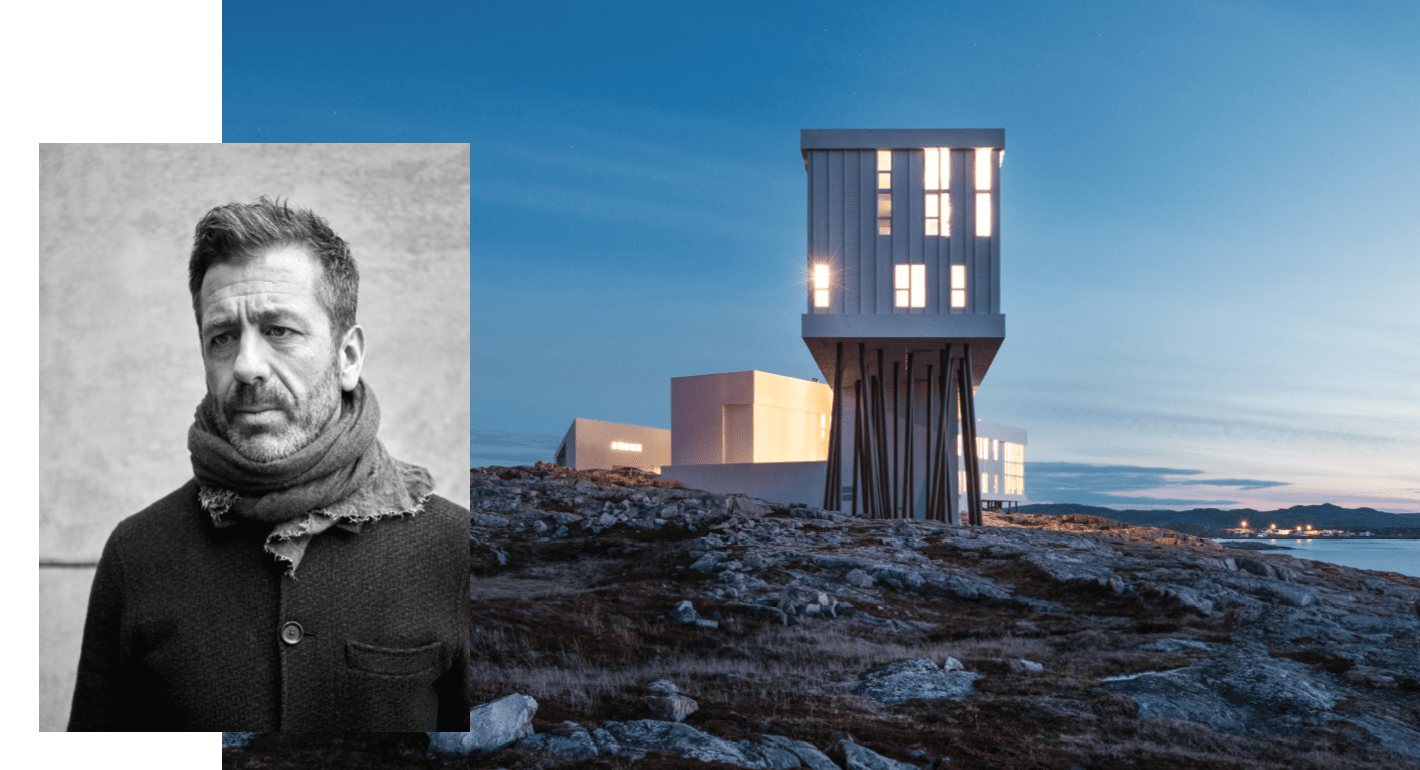 Over the course of his career, Saunders has consistently sought to redefine the relationship between nature and architecture, with neither being subservient, nor dominant, to the other in his work. Striking architecture in dramatic landscapes made with indigenous materials help to marry seemingly unnatural forms to the natural world around them. It’s the distinctiveness of these forms that makes the places in which they are built destinations, rather than mere hotels or facilities designed to host visitors.

“All these tourist destinations today, they’re not specific enough and they’re just too generic. People have a lot of choices, so they won’t go to a place that they’ve already sort of been to that looks like another place,” Saunders notes. “Each place should be separate and confident in its own identity.”

Distinction of place is the new exclusivity, he says. “There’s also value in businesses using the architecture as destinations as well, because you know, a café with its own character should be visited more than a Starbucks, for example. I think people are getting tired of that. I think people want authentic experiences.” 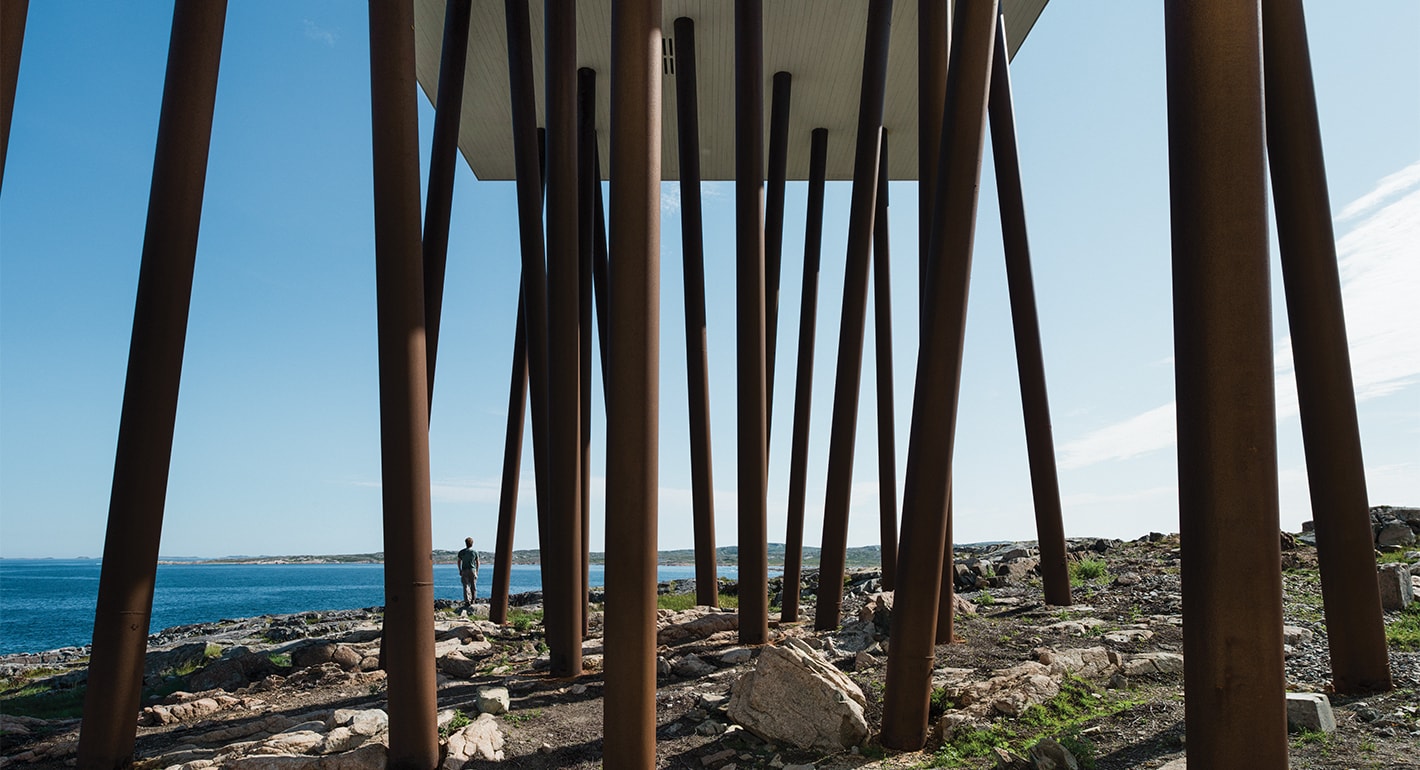 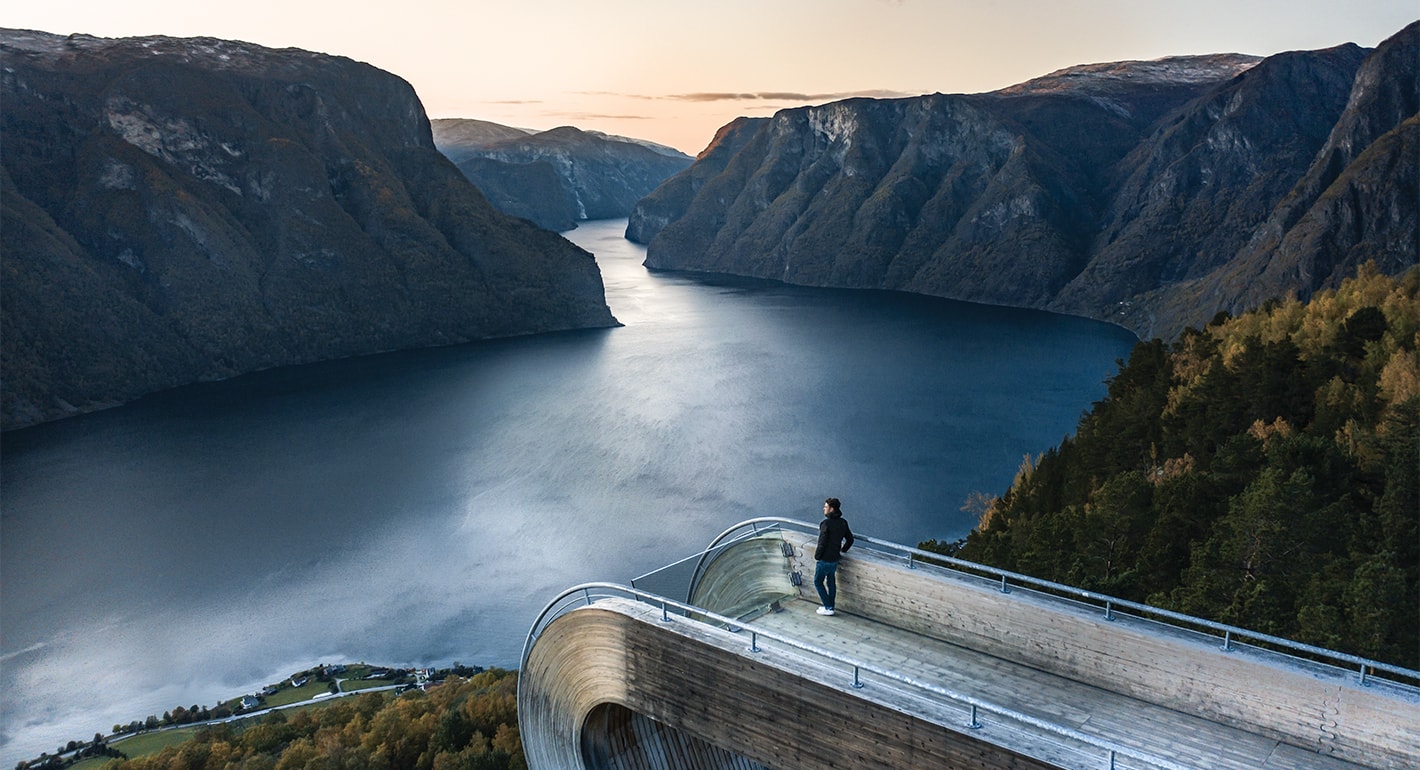 Saunders, now 50, grew up in Newfoundland but moved to Halifax, Nova Scotia, at 14 to complete his last two years of high school. He studied at the Nova Scotia College of Art & Design and had an opportunity to study at the Rhode Island School of Design as an exchange student. His first job took him to Vienna, followed by a stint in Berlin and then back to Canada working in Vancouver as a landscape architect. When he realized that he was drawing more parking spaces than trees, he decided that landscape architecture might not be his calling. His boss in Vancouver called McGill University, and two hours later he was accepted. “I was in Montreal four days later doing my masters in architecture,” says Saunders.

After graduating from McGill, he returned to Europe, working with a human rights organization building houses in Russia. Saunders had offers to work in Switzerland and Toronto but turned them down to take on a pro-bono project in Norway.

Architecture should facilitate the experience of nature, while also appearing as an attraction in its own right.
The Norwegian Scenic Routes Program

“I was there for three months designing, and then after three months they said we didn’t have any money to build it. And so I organized a bunch of architecture students from all around Europe to come and help me. We put out our tender to do the digging for the three ponds I designed. It came in at $55,000. They couldn’t afford that. So I asked the farmer next door if he’d sell me a tractor for 5,000 bucks. I fixed it up and I learned how to drive it, dug it out, had the architecture students build it, and sold the tractor for $18,000 at the end of it.”

A defining moment in Saunders’ career came in 2002, when he had an opportunity to pitch for a commission with the Norwegian Public Roads Administration to create a rest area for visitors as part of its new National Tourist Routes strategy, which aimed to draw more visitors to rural areas of the country by building new roadside installations and visitor centers. 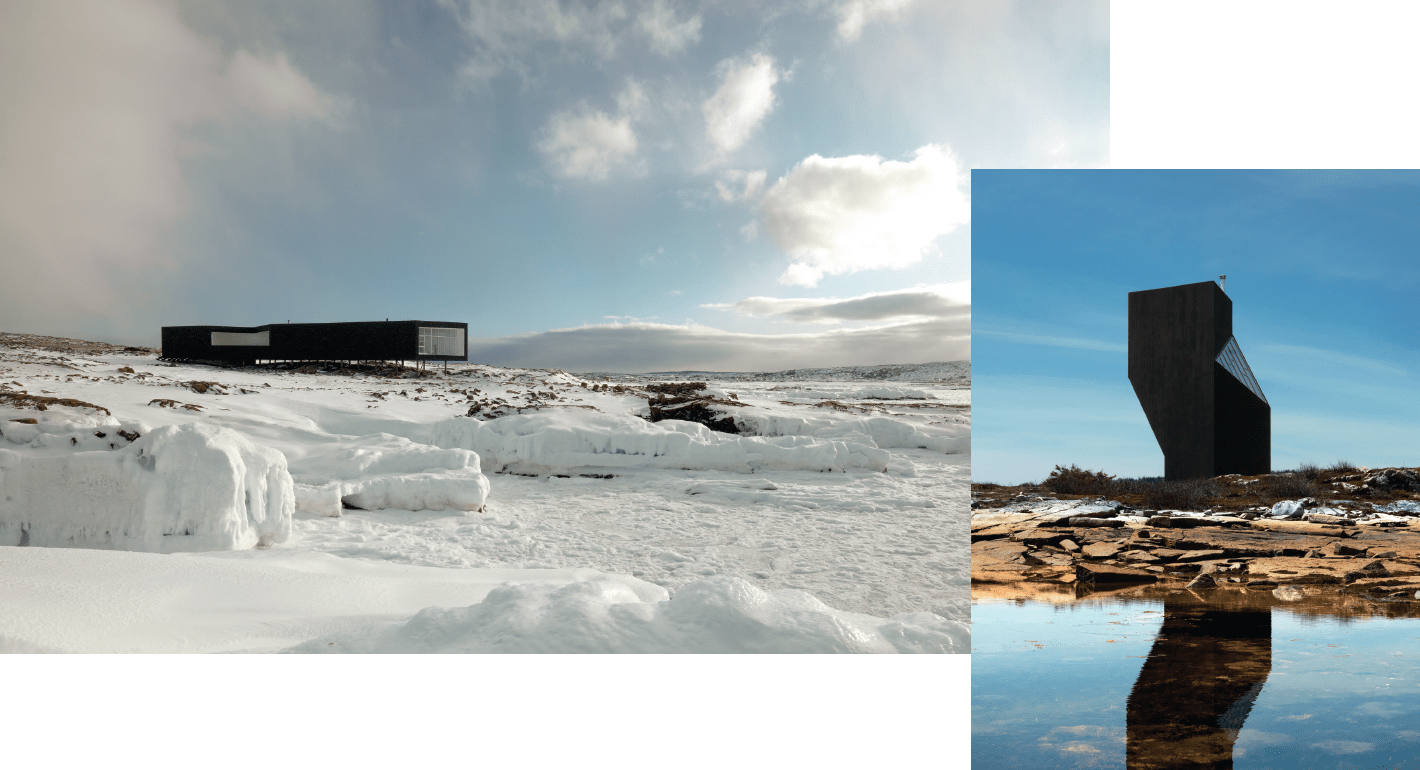 Saunders designed a collection of artist studios on Fogo Island

“They asked us to design a public toilet, 10 parking spots, five garbage cans and 10 picnic tables. And we stood up there and we said, ‘This place is so beautiful,’ you know, ‘there’s a lot of responsibility attached to it.’”

Ever the self-evaluator, Saunders, along with his team, wondered if anything should be built on the site at all.

But it was that inherent stewardship and honoring of building sites that won Saunders and partner Tommie Wilhelmsen the Aurland project.

The winning concept? A scenic lookout that gives visitors a new perspective, and a new relationship with the wilderness around them. The 360-foot platform juts out over treetops, curving at its terminus, creating the sensation that you might almost slide off into the vast fjord below—were it not for the single sheet of glass that encloses the structure.

“We called it the ‘600 Meters over the Town Tower and 20,000 Kilometers from Tokyo.’ That was the motto, and it meant that a little piece of architecture can attract people from other parts of the world,” says Saunders. And attract people it has, as one of what is now a collection of 100 attractions, viewpoints and rest areas along 18 routes around the country, with the Aurland Lookout raising the bar for the program in its early days.

The Norwegian Scenic Routes program (as it’s known today) believes “architecture should facilitate the experience of nature, while also appearing as an attraction in its own right.”

Appropriately, it’s a philosophy that underpins Saunders’ work to this day on projects ranging from a visitor center for a new national park in Maine to homes in the foothills of the Canadian Rockies to a hotel and church in Sweden.

And it very much informed his thinking on how to approach the development on Fogo Island when fellow Newfoundlander Zita Cobb approached him to work on the project. 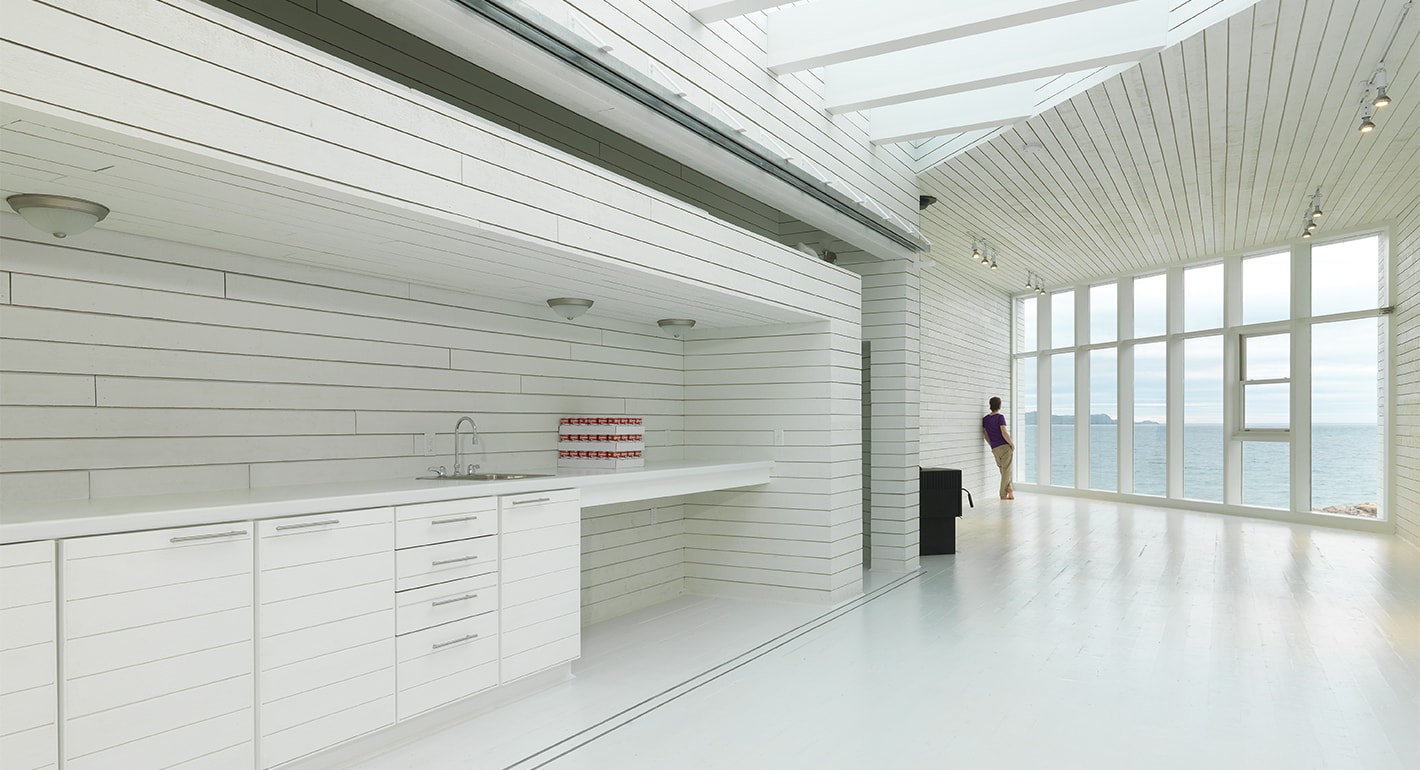 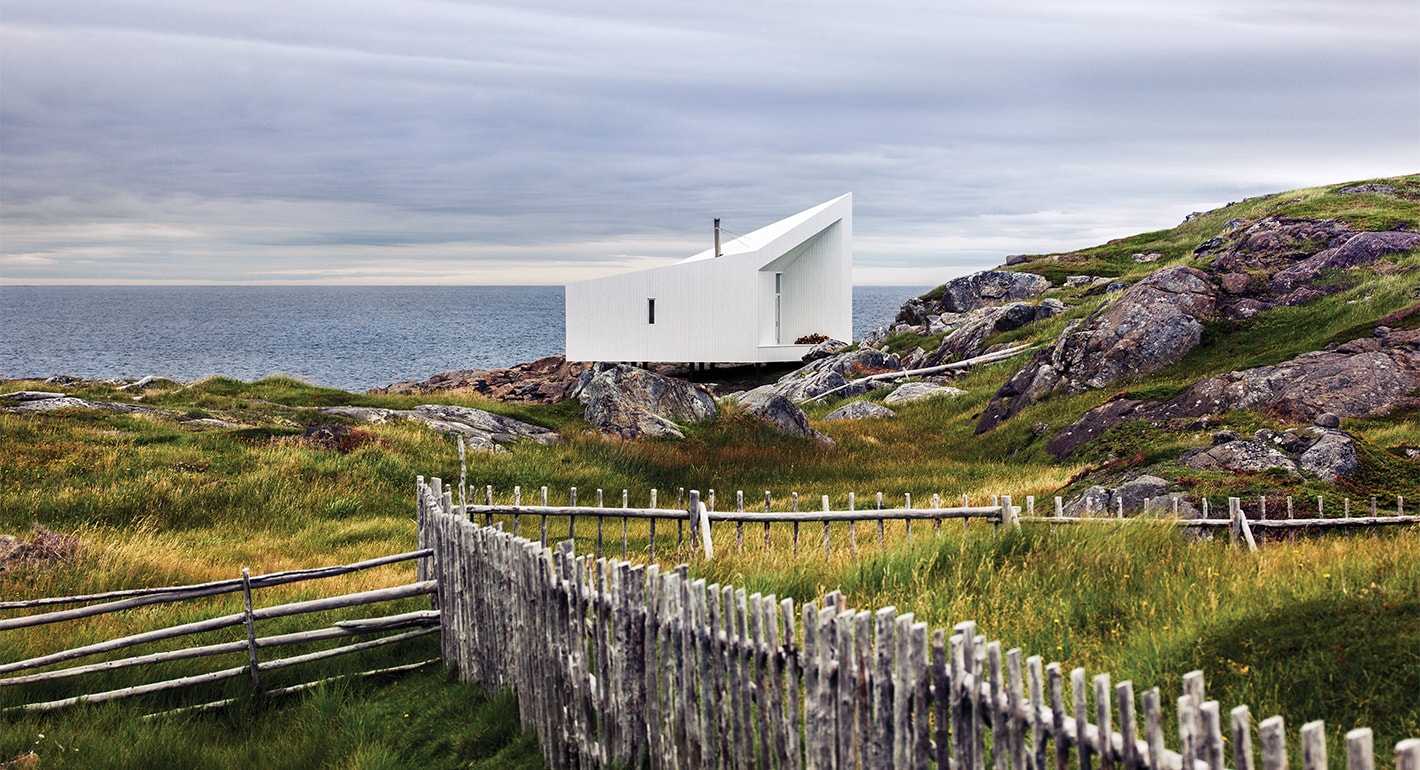 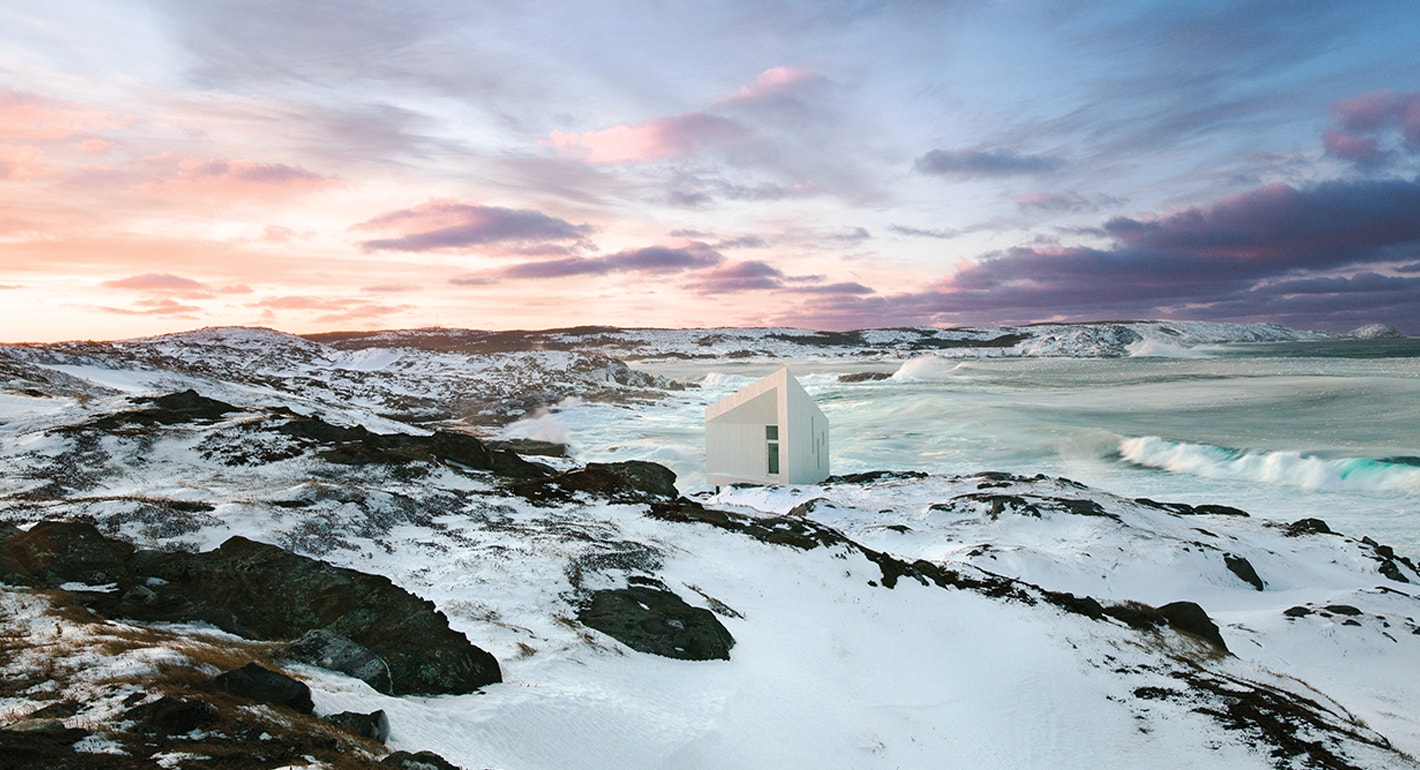 Cobb grew up on the island and was witness to the decline of the fisheries industry as commercial trawlers wiped out the cod stocks that had long been the mainstay of Newfoundland’s economy. Her father, a fisherman, encouraged her to study business and she did just that, going on to make her fortune as an executive with JDS Uniphase in Silicon Valley.

People have a lot of choices, so they won’t go to a place that... looks like another place. Each place should be separate and confident in its own identity.
Todd Saunders

In 2003, she cofounded the Shorefast Foundation, a charitable organization designed to help revive the island’s economy by conserving its cultural past.

In seeking out an architect to execute her vision of developing a series of artist studios and a hotel that would attract new visitors, and their money, to Fogo Island, she reached out to Saunders. He was raised in Newfoundland, but Saunders had been living in Norway for more than a decade when he received Cobb’s call—which came while he was out kayaking along the country’s rugged coast.

After taking the call in his kayak, Saunders was skeptical. But as he paddled on, his curiosity was sufficiently piqued that he detoured to a café with wifi to find out more about this mysterious caller from his homeland. A quick Google search revealed that Zita Cobb was one of the richest women in North America at the time. He called back, they chatted for five hours, and a week later Cobb flew to Norway for a meeting. This after dozens of architects had already interviewed for the project.

“And she goes, ‘I don’t trust any of them,’” Saunders recalls. “‘Every one of them told me what I needed before I got my mouth open.’ And she goes, ‘I spent a week with you now, and you haven’t told me anything that I need and you’re not pushing any ideas on me.’ And that’s how it happened.”

With its treeless, craggy shoreline, and its houses and stilted docks (fishing structures called “stages” in local parlance), Fogo Island’s landscape immerses visitors in a world that’s at once bleak and beautiful.

Saunders’ first assignment was to design a collection of houses that would be used to attract artists to come and work on Fogo Island. “I was drawing these houses and I felt like an idiot,” says Saunders. “I was like, I can’t draw houses better than a Newfoundland salt box house. This is absurd. And I had to go back to her. I said, ‘I can’t do this.’” As an alternative, they decided to renovate existing houses on the island and pair them with a collection of four studios that Saunders would design. The first, the Long Studio, was completed in 2010.

Next came the hotel. His design for the Inn echoes the way in which the fishing stages, built as sturdy as ships to withstand the furious wind, sit on stilts over the rocks.

“I’m going to be very honest with you—one third of them are structural,” says Saunders of the hotel’s signature stilts. “We don’t need the other two thirds, but it didn’t look good [without them].”

Seen from the water, the Inn resembles a massive iceberg (or a futuristic vessel) hovering over the rocky shore; up close, it’s an architectural wonder that evokes the island’s centuries-old maritime tradition. Sheathed in spruce boards that are painted a glacial shade of white, the $41-million, 43,000-square-foot oblong edifice is a fresh take on the century-old houses that still stand on the island.

We like to think of the Inn as made of us, made of this place.
Zita Cobb 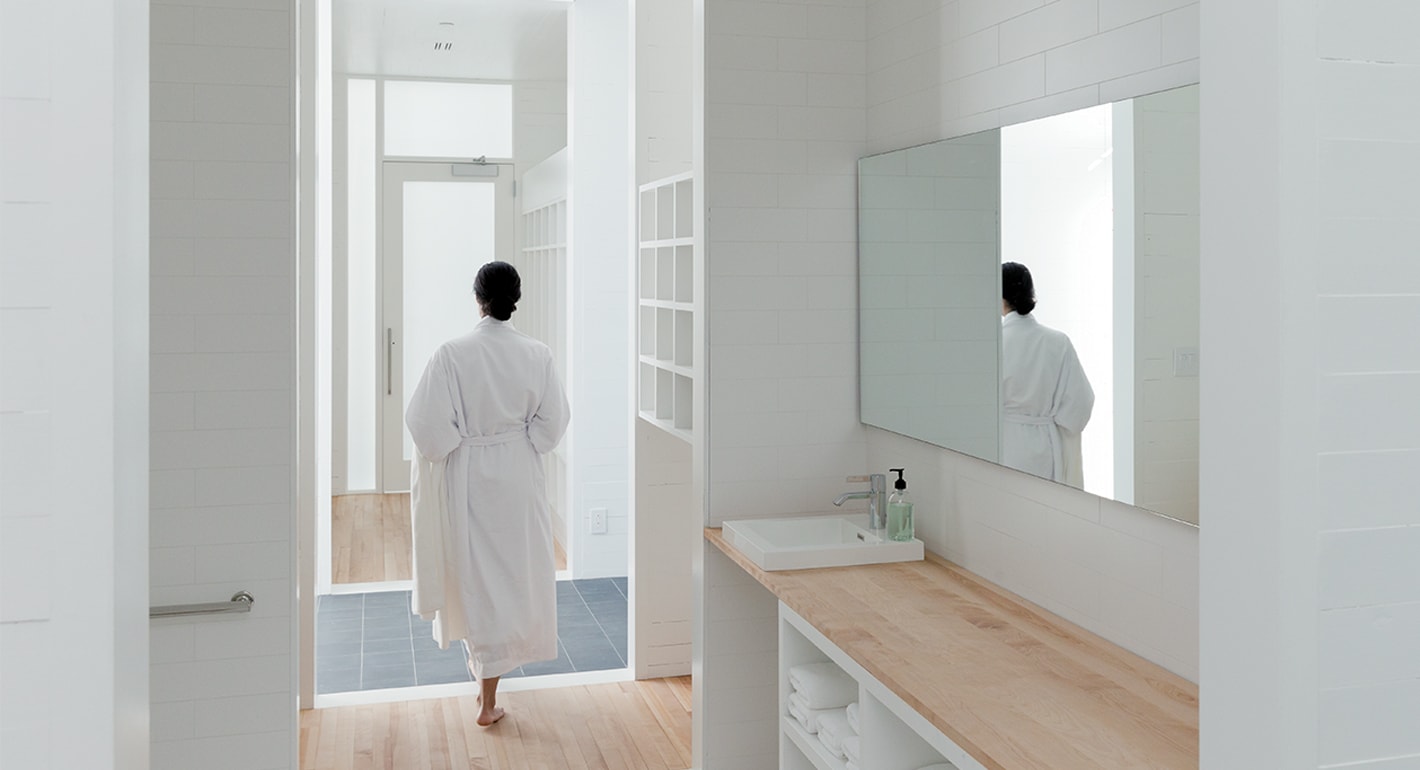 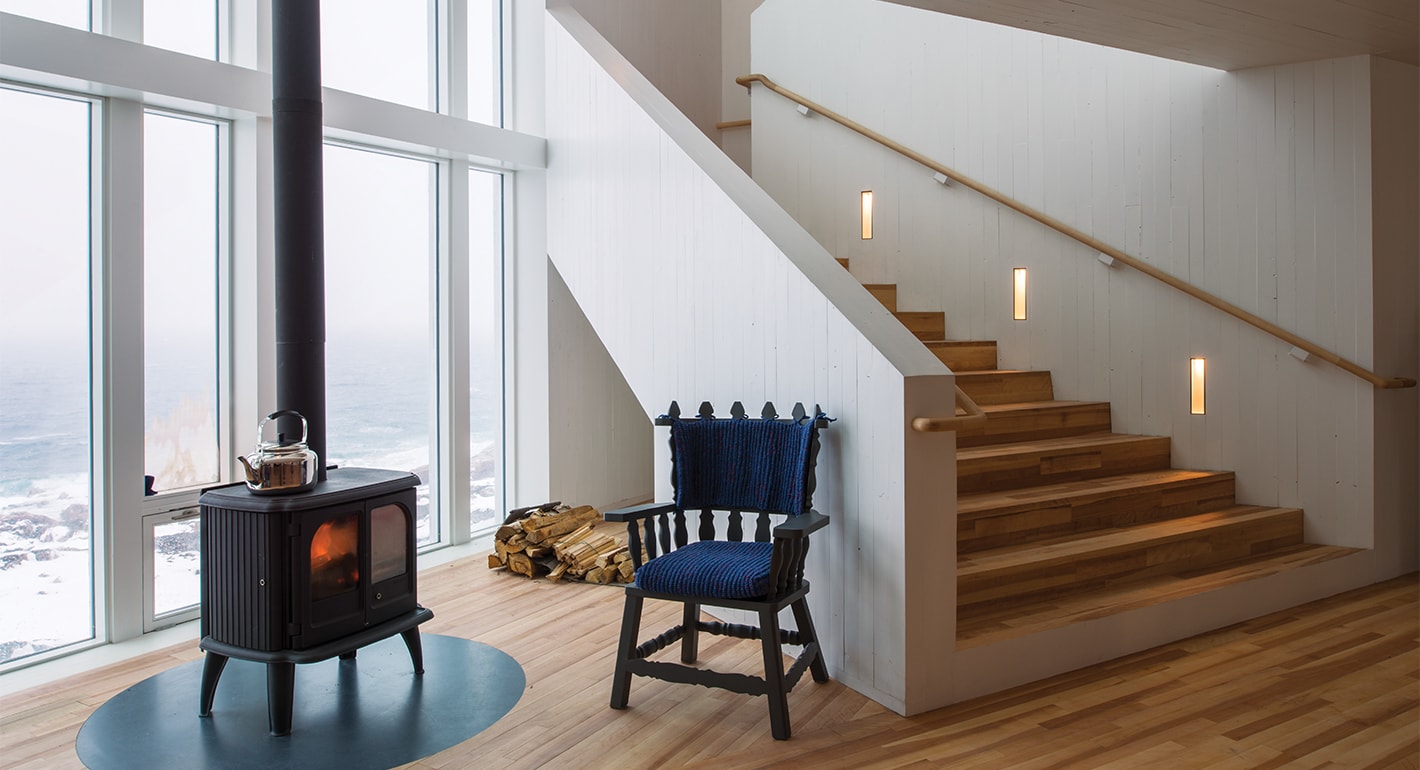 Walk the Inn’s long corridors, where the shafts of light that pour in through the windows play geometrically across all-white walls, and the impression is more church or art gallery than hotel. Here, the guest is the canvas and nature’s elements define the experience.

“In the hotel industry right now, you can wake up in any hotel in the world in the middle of the night and not know where you are, and that freaks me out. But here [at the Fogo Inn], you wake up in the middle of the night, your window’s open, you can hear the ocean, you look up, see the wood, it’s an immediate feeling that you’re in Newfoundland.”

“We like to think of the Inn as made of us, made of this place,” notes Cobb.

It’s a distinct sense of place that’s now calling Saunders to come home after living in Norway for more than 20 years. He recently purchased some property on Fogo Island, including an old schoolhouse—a project he was busy renovating himself last summer.

“I feel best when I’m driving around in a pick-up truck down there in coveralls and doing something,” says Saunders. “I really don’t think we should forget where we’re from.”