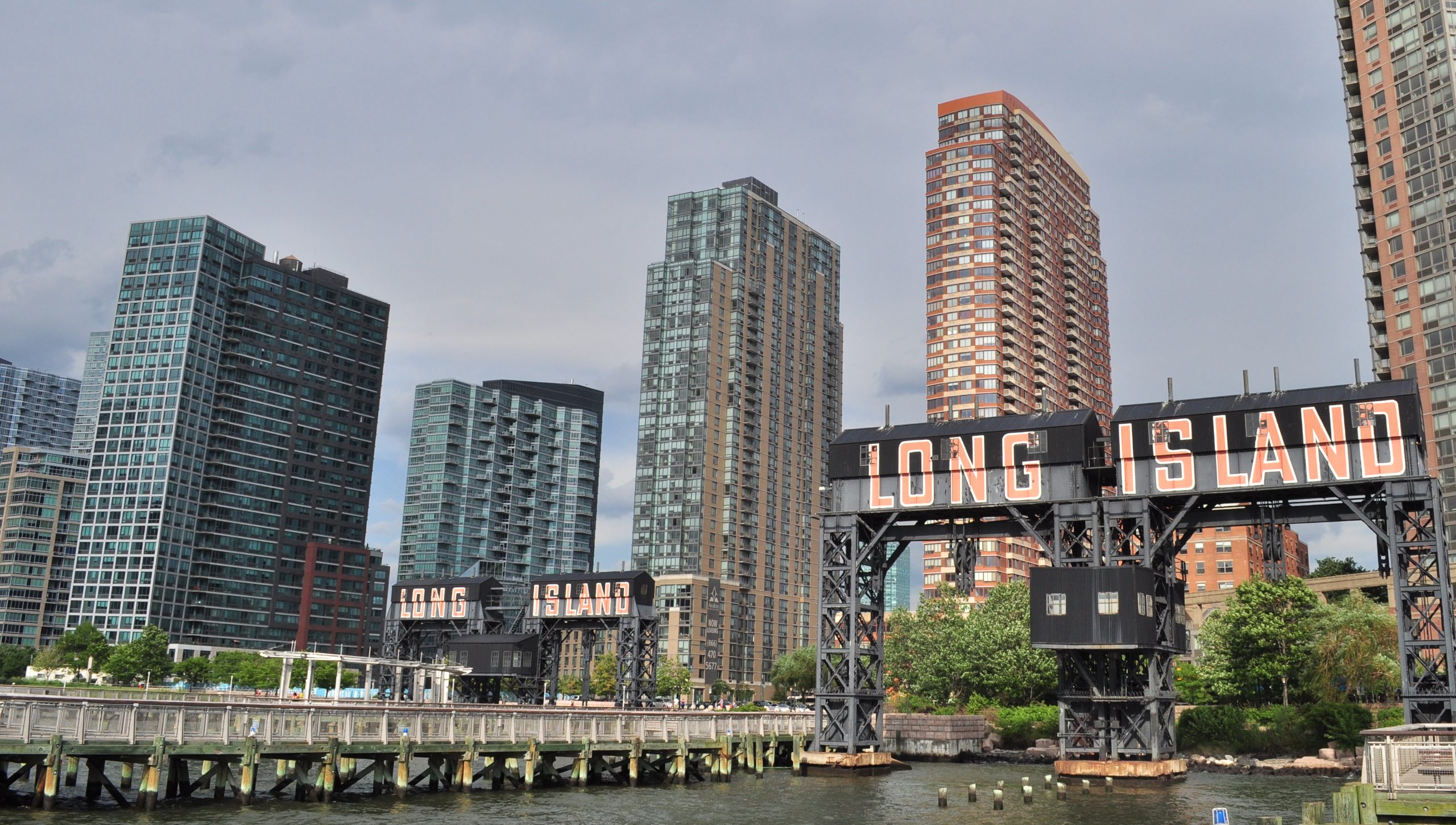 We predicted the locations of Amazon HQ2. Here’s how we can help you

So the beauty pageant is over and everyone except the two winning cities is disappointed in how Amazon raised the hopes of the dozens of regions across North America only to make the now seemingly obvious (some would say preconceived) HQ2 selection.

Resonance always knew it would be one (or two) of five cities—our data confirmed it months ago—but the pursuit of the Amazon prize was worthwhile, allowing cities to develop a better understanding of the factors and criteria that site selectors and talent are increasingly going to be looking for in the future.

Ever since Amazon announced plans in September 2017 to build a second headquarters known as HQ2—and the company’s promises of $5 billion investment and projected 50,000 jobs (paying an average of $150,000)—238 cities across North America officially got in line to woo the tech giant.

As leading advisors in real estate, tourism, and economic development—a great many of our clients being cities—we were excited to see this acute hunger by regional leaders to shape the future of their cities (albeit a bit dismayed at how Amazon was playing them against one another to its own advantage).

This was also an opportunity for us to use our exclusive city data—the same data we provide to cities, communities and developers that work with us to attract residents, tourists and investment to their destination or development—to prognosticate on what city would most likely to win this massive prize.

To do so, we dove into the eight-page RFP that Amazon provided to cities and identified a number of key criteria in their RFP that they said was important to them in selecting a city for its second headquarters. For each of these factors, we identified data points available to us from our America’s Best Cities rankings to see how each hopeful city performed in each of these areas to narrow down our potential winners. Based on the factors Amazon highlighted in its RFP, we analyzed:

Talent
Educational attainment and the ranking of institutions of higher education

Quality of Life
Crime rate, average time to commute to work, and the quality of neighbourhoods and landmarks

Next, we assumed that Amazon was unlikely to choose a city that had less advanced industry service workers than Seattle currently has (approximately 160,000). The last filter was the seamless air connection between HQ1 and HQ2. Amazon’s RFP explicitly states that the company would only consider cities with daily direct flights to Seattle, New York, the Bay Area, and Washington, D.C.

The results of this analysis surfaced a Top 5—the cities where the company that wants to own the Internet (and commerce in general) was most likely to set up shop:

While New York landed in first place, we noted that there wouldn’t be enough commercial office space in the city for Amazon—unless HQ2 was split. Toronto came in second, but we ruled it out as they were not offering any incentives. Chicago and Northern Virginia were a close third and fourth and we predicted that Northern Virginia would win out based on Bezos’ personal interests in the Washington DC area, not to mention that 70% of the Internet’s traffic flows through Northern Virginia.

Now that the contest is over, we were heartened to see that the winners—Long Island City, in the fast-developing Queens borough of New York City, and the Arlington, Virginia, neighborhood of Crystal City—were selected.

While we were delighted to see that we were able to accurately predict the location(s) Amazon would select using the data we collect for our Best Cities rankings, the real takeaway for cities of all sizes from all of this is that quality of place is growing in importance to companies in their site selection decisions. Because it’s quality of place that increasingly determines where talent, tourism and investment flows.

So how do we go about measuring quality of place? 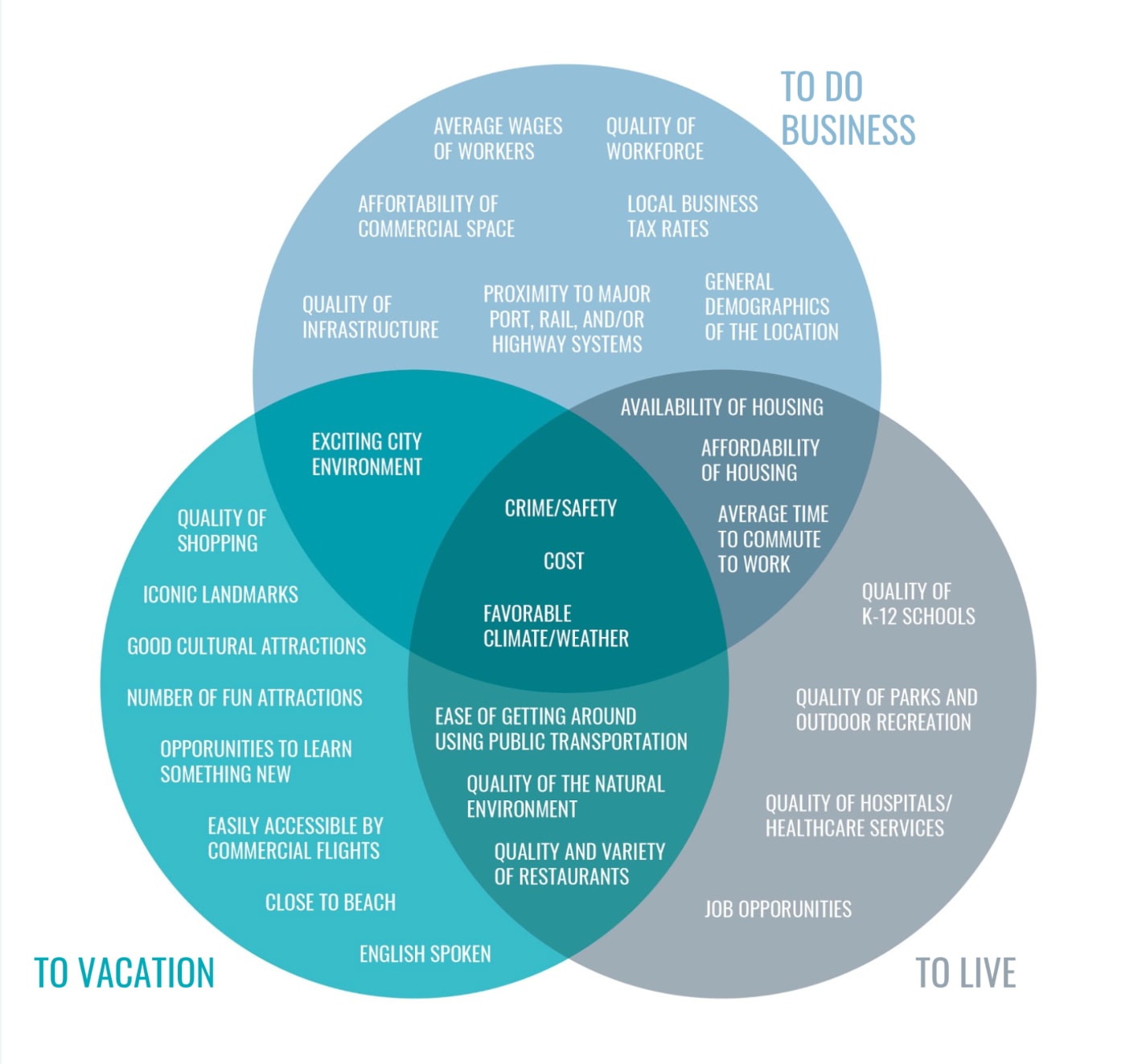 Factors for living in and visiting a city.

But we didn’t stop there. Next we conducted an analysis of the 50 largest cities in the U.S. and analyzed which of these perception shaping factors were most highly correlated with the number of foreign visitors each city received last year and the number of jobs in foreign owned enterprises as a measure of the amount of cumulative foreign investment each city has received.

The results surprised us.

Instead, the factors that show the highest correlation with the number of jobs in foreign owned enterprises were largely the same as the factors that showed the highest correlation with the number of foreign visitors each city received. While the number of Fortune 500 Companies and number of professional sports teams have high correlations with the amount of foreign investment in a city, the other top 10 factors are the same as those that are important to attracting visitors: Google trend score; Facebook check-ins; Instagram mentions; Google search results; culinary experiences; museums; nightlife; neighborhoods and landmarks; culture and shopping. 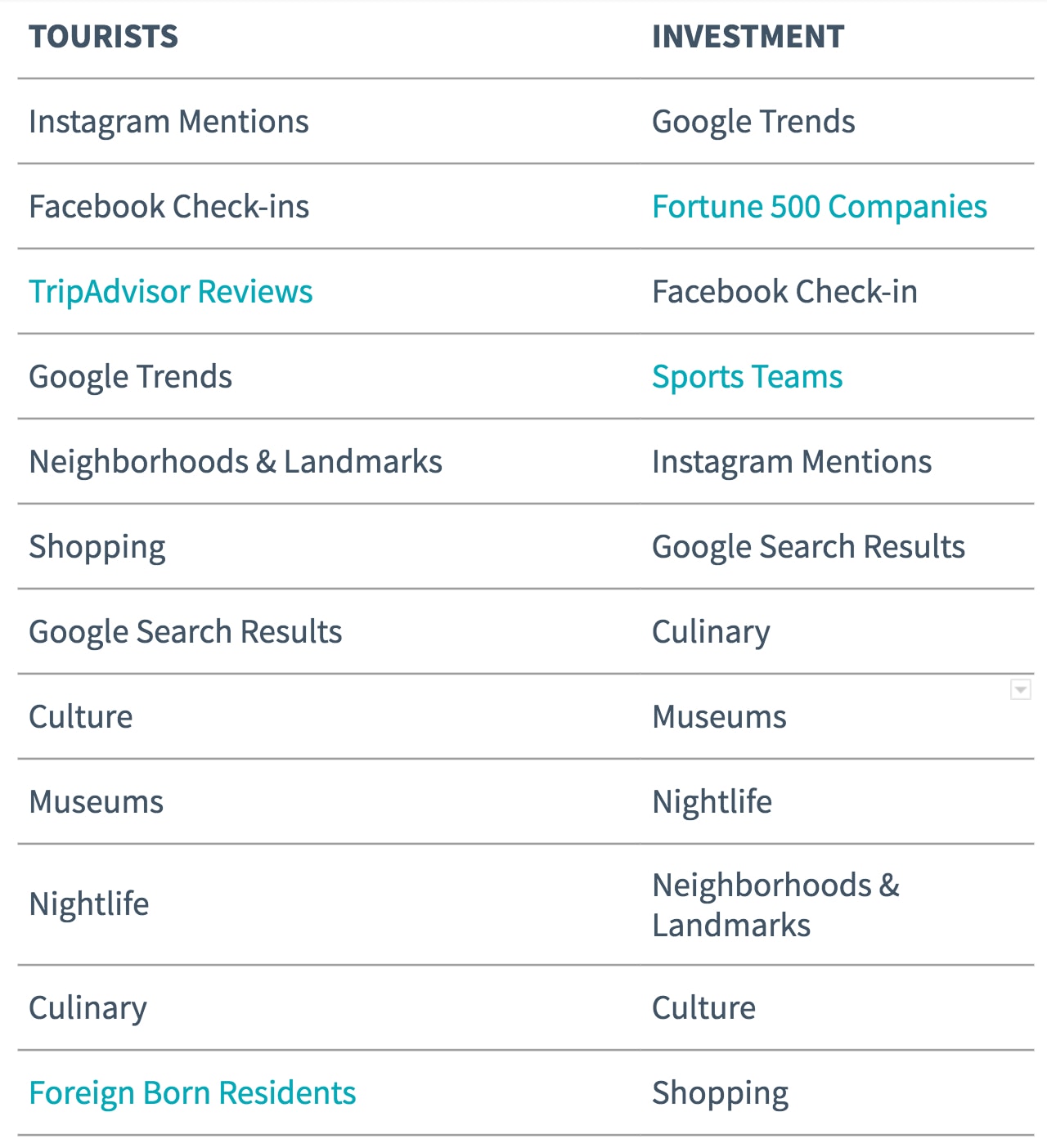 All of these speak less to the “logical” factors economic developers have typically focused on in the promotion of their city, and more to those factors that make a city “lovable” (hello Nashville and Austin), which destination marketing professionals promote to attract visitors to a city.

In fact, many of the factors identified by Amazon in its HQ2 RFP that we measured to predict potential sites for HQ2 are the very same factors we’ve identified as having a high correlation with attracting both international visitors and investment, which we’ve used to develop our Best Cities ranking methodology.

All that is to say that many of the metrics by which city’s have benchmarked themselves in the past may no longer apply. The Amazon HQ2 process confirms that the site selection landscape has shifted and that cities, of all sizes, need to start thinking about quality of place—whether that be neighborhoods, nightlife, or culture—not as a nice to have, but as a need to have in order to compete in the 21st centruy.

And while there’s a lot of bitterness in cities across the continent at how Amazon went about running this city pageant, walking away with valuable city data for free courtesy of millions of unbillable hours, cities large and small should use the experience to strengthen their story for future growth.

Coming together across silos demonstrated their readiness for business investment, their livability and visitability, and their civic pride. It helped develop a better understanding of the factors and criteria that site selectors and talent are increasingly going to be looking for in the future.

The rejection may be painful now, but the cities who put themselves out there will be stronger for doing so.

To learn more about how Resonance Consultancy approaches advising cities on their economic development strategy, please check out our services or send me an email.