7 lessons in city building, from our work on Calgary's newest neighborhood 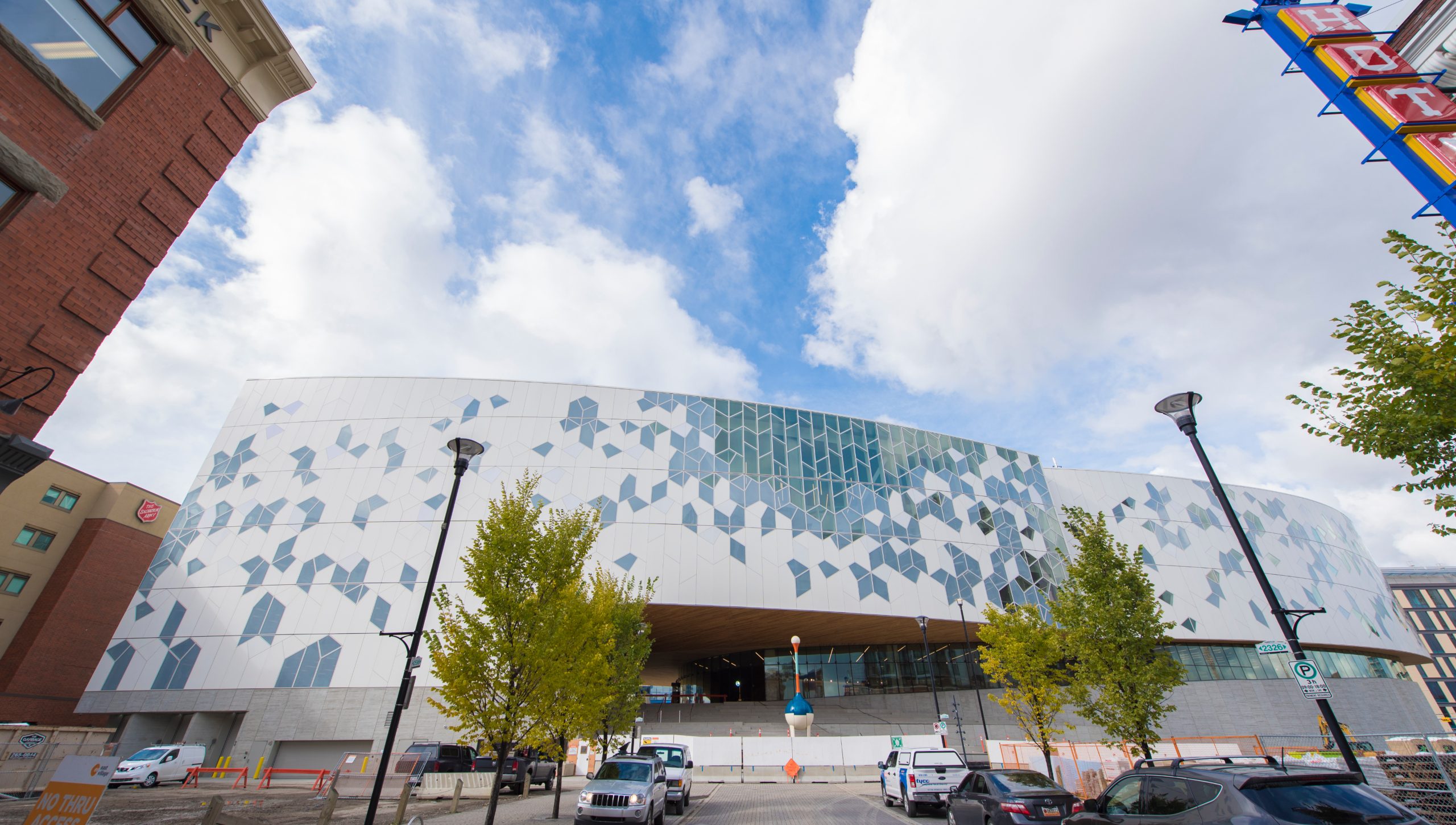 Today, in the Western Canadian city of Calgary, Alberta—population just over 1 million—an extraordinary new Central Library designed by Snøhetta and its Canadian partner DIALOG is opening its doors to the public.

In a sprawling prairie city near the Rockies—whose current landmark is a 627-foot observation tower built for Canada’s Centennial in 1967—the four-story library is a high point of a different kind, a contemporary landmark crowning a rejuvenated downtown neighborhood that has changed the way Calgary residents think about and experience their city.

The new Central Library and its East Village home are the product not only of some of the best design minds on the planet, but also a key part of a decade-long urban experiment in community development and urban revitalization that turned East Village, a destitute 49-acre brownfield site where the city was founded, into a thriving, walkable urban neighborhood—one that has attracted Calgarians to live downtown, attracted some $2.7 billion in private investment, and that will be home to some 11,500 people when it’s built out in 2025.

Resonance Consultancy has worked with the city’s development company, Calgary Municipal Land Corporation (CMLC), since the project’s inception in 2007. We were first brought on to define and articulate an overarching vision and positioning for the neighborhood and have been sharing its story with the local community and prospective developers and investors ever since. Here’s what we’ve learned about city building through our Calgary project over the past decade. 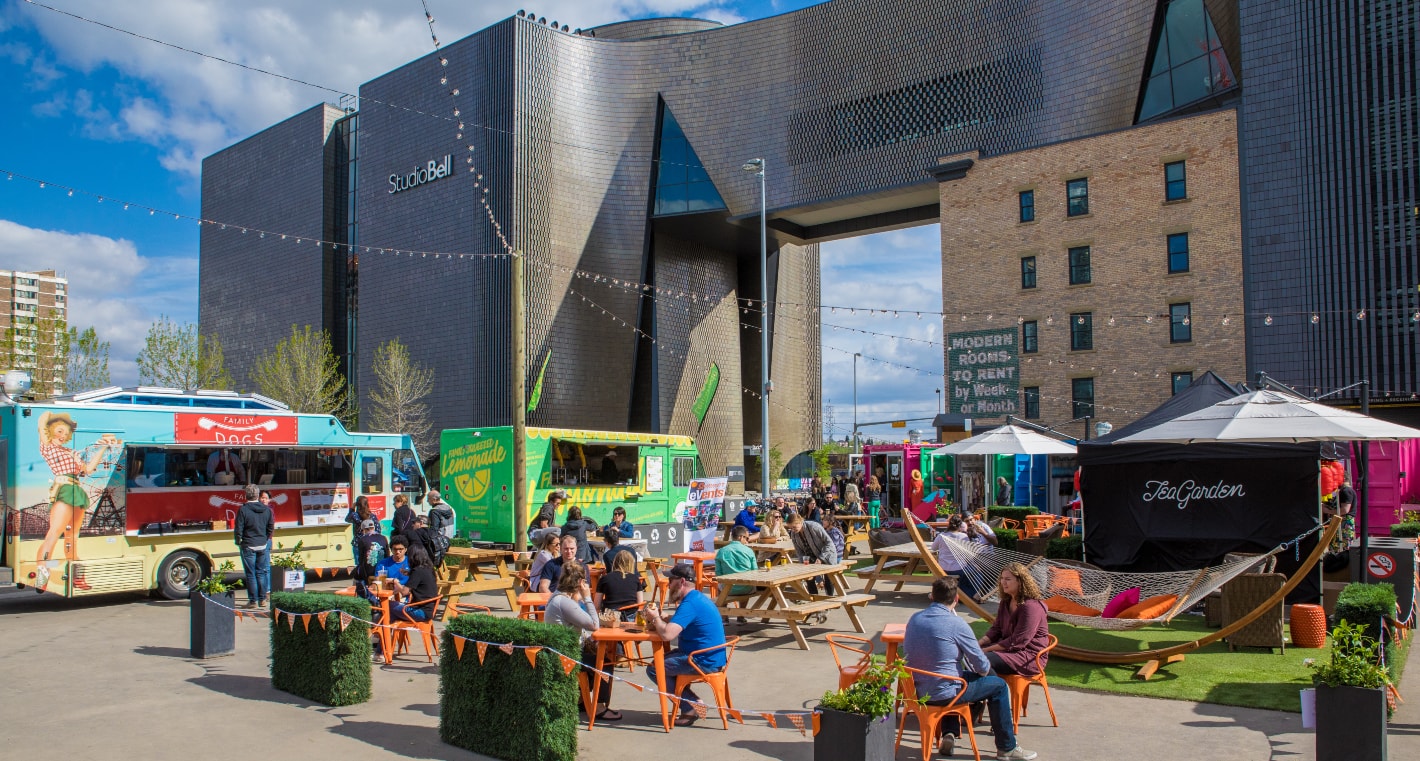 East Village (EV) was designed primarily to provide an alternative to suburban living in a city that has one of the lowest densities in the world (just 2,112 inhabitants per square kilometre). Housing in a walkable downtown neighborhood was in short supply and growing in importance for energy companies seeking to both retain and attract the next generation of talent to the city.

But beyond making Calgary a more livable, desirable city, the planning of East Village sought to make it more of a destination, too. The very first land sale completed was for the creation of the National Music Centre of Canada. A new pedestrian bridge connects to a new island park and the Calgary Zoo. And a new underpass on 4th St. provides a connection beneath the train tracks that bifurcate the city to a planned new entertainment and arena district that could be a cornerstone of Calgary’s prospective bid for the Olympic Winter Games. The new Central Library is a critical piece of the development puzzle—an essential community service that physically links East Village to downtown business, all wrapped in an architectural package that’s a bona fide reason to visit.

While urban, tourism and economic development tend to be approached in silos, Broadway Malyan’s approach to creating the master plan for East Village demonstrates the benefits of planning for all three simultaneously. Tying these together encouraged ambitious thinking and doing, and was instrumental in EV’s success. 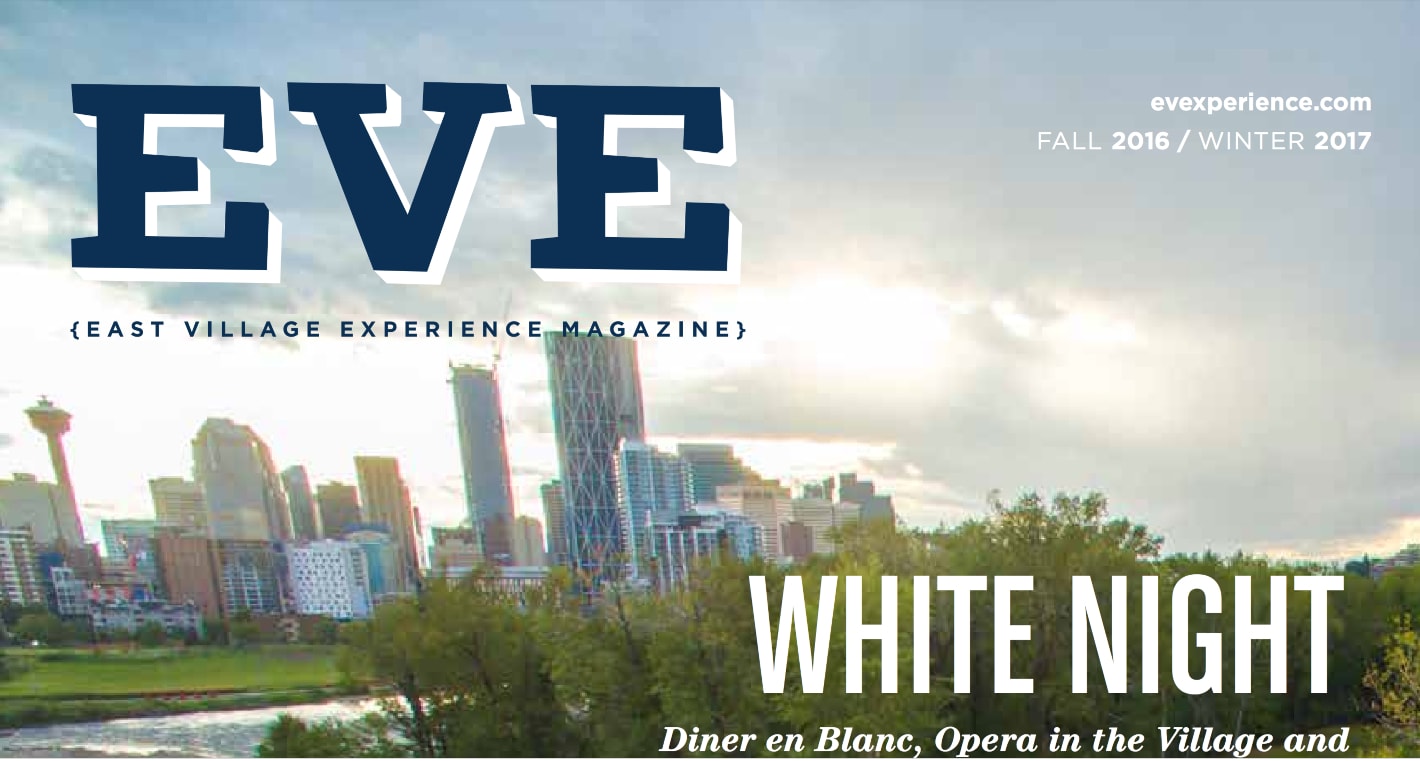 A cover of EVE Magazine

2. Rejuvenation requires both infrastructure and imagination

Massive long-term infrastructure improvements were needed in East Village; the entire 49-acre site had to be raised by five feet to take it above the 100-year flood mark before anything new could be built. Construction would go on for years. While engineers appreciate these critical details, they don’t necessarily resonate with the broader community.

To communicate and share the vision for East Village with Calgarians, Resonance decided that we were going to behave as though East Village was a completed, already vibrant neighborhood. We created EVE (East Village Experience), a ‘city magazine’ in which we vividly described the experience through the eyes of young families, single professionals and downsizers.

We spoke in the present tense, evoking an island park, a restaurant in a restored historic mattress factory, condominiums with a view on the river, cycling and walking. We made Calgarians curious about what was going on in this downtown neighborhood they’d forgotten—or more likely never heard of. EVE was old-school, but it was tactile: it made East Village feel real, not virtual. The mayor at the time, Dave Bronconnier, said he kept a pile of the magazines in his office to give out to guests and naysayers.

As developers came on board, they found it a useful tool as well—useful enough to pay for. We updated EVE magazine twice yearly for more than seven years, and used variations of the stories told in the magazine to appeal to all the audiences—from residents to commercial, retail and hotel development partners—needed to make East Village successful. 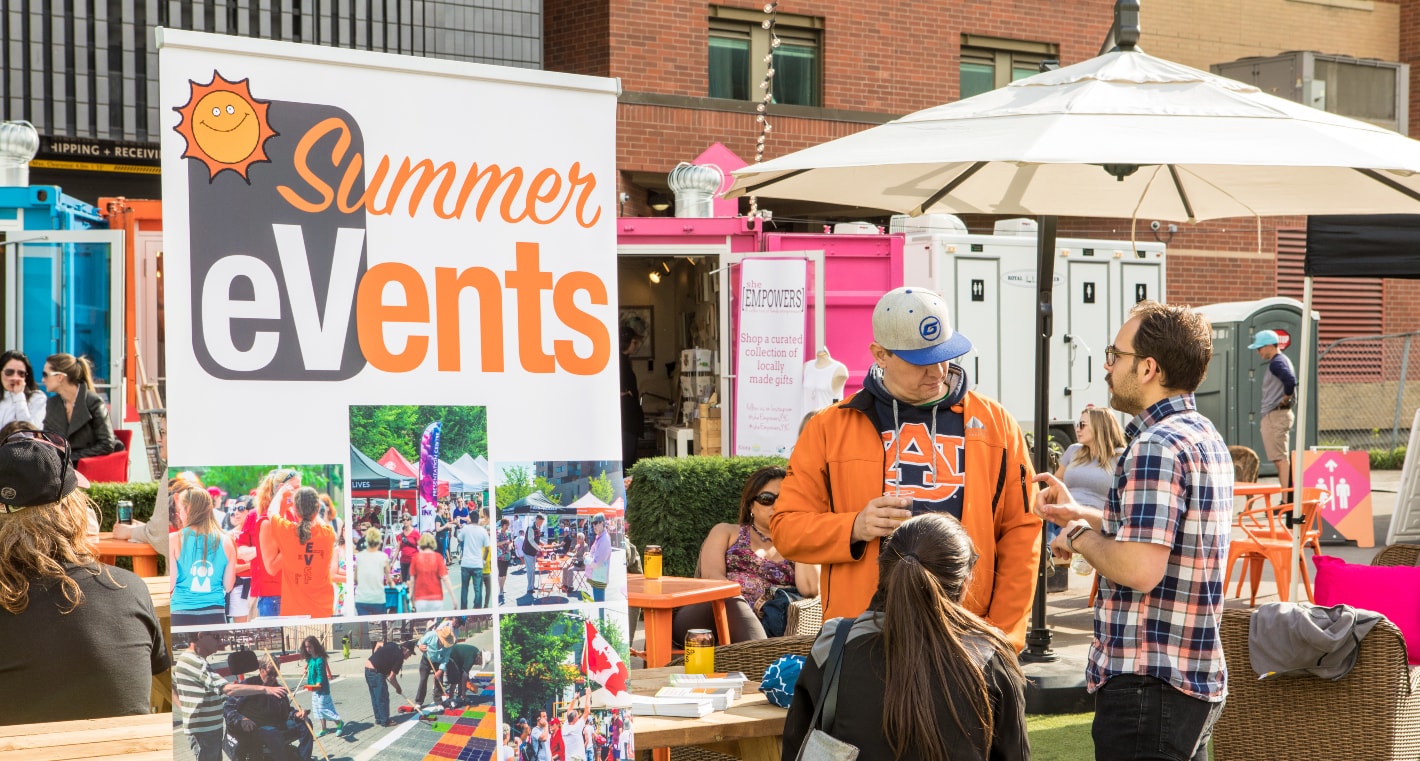 Engaging residents is an ongoing responsibility and opportunity

3. Don’t forget to remediate public opinion after you remediate the land

When we began working on East Village in 2008, locals could scarcely imagine themselves living in downtown East Village; most Calgarians wouldn’t have been able to find it on a map. Local developers wouldn’t touch it.

After CMLC was done remediating the land and laying the groundwork (and water, and wiring) for future development, we worked to remediate public opinion by engaging the public and activating the site two years before the first condominiums would ever be sold. For example, CMLC persuaded the Calgary Marathon to re-route through the neighborhood, then invited Calgarians into makeshift cheering stations with live bands, snacks, and prizes for the most enthusiastic crowds. East Village was off to a running start, and momentum has grown ever since. 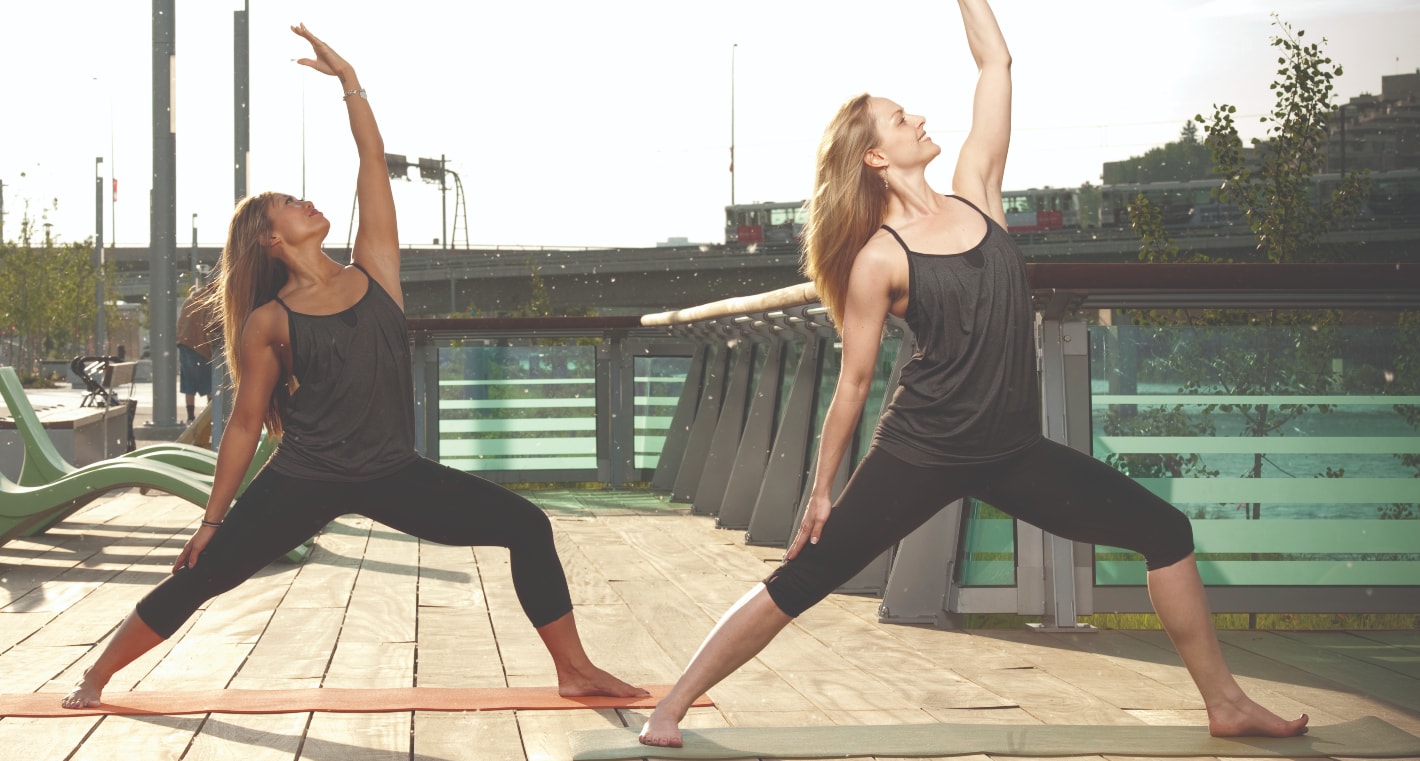 Yoga on the RiverWalk overlooking the Bow River

One of the first areas to be developed in East Village was the land along the riverfront. The creation of a new 4 km long RiverWalk™ linear park and plaza, designed by Stantec, not only connected East Village to neighboring communities, but provided Calgarians with both a reason and an opportunity to rediscover the area. But more than that, it also spoke to the quality of the development to come.

In 2012, the Urban Land Institute chose the RiverWalk as one of five finalists for its prestigious Urban Open Space Award. “These finalists are powerful examples of the importance of creating great public urban space to augment the quality of life of a community’s residents,” said Jury Chairman Randall K. Rowe, chairman of Green Courte Partners, at the time. “They also highlight, from a purely economic perspective, how investments in well conceptualized and executed public space can create a multiplier effect for the value of surrounding private property.” Unfortunately for East Village, the RiverWalk was competing against New York’s elevated High Line park, which ended up winning the award that year.

Resonance convinced competing developers to cohabit and share a single ‘Experience Center’ rather than establish temporary sales offices of their own.
Resonance Consultancy President Chris Fair

5. The bigger story is the better story
Early on, when there were just two main residential developers and a lot of empty dirt, Resonance convinced them to work with CMLC and cohabit and share a single ‘Experience Center’ rather than establish temporary sales offices of their own. We designed it so an enormous model of the community was in the middle, and the high walls told the complementary story of the urban and the natural experience to be found on an East Villager’s doorstep.

The developers, installed on opposite sides of the central space, created showrooms and environments for their complementary products, but we were satisfied: people bought into the big idea of the community before they shopped for a home and more than 10,000 Calgarians visited the center in its very first year. 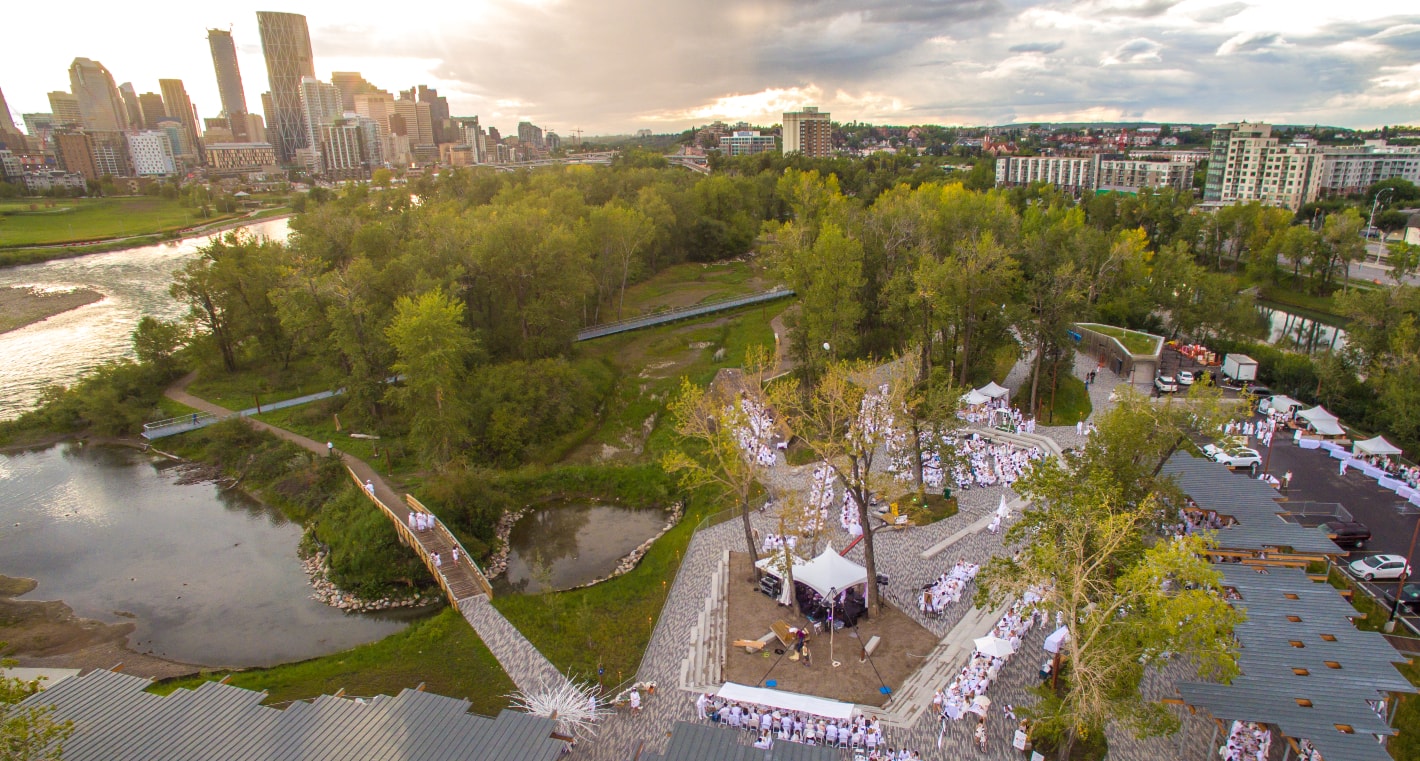 CMLC never counted on mere buzz to bring people to EV. Energetic programming of space began immediately—the moment a section of RiverWalk opened, people were invited for everything from concerts to yoga classes. (We like to say that some of our earliest adopters were young women in Tree Pose.) A music festival and market followed, and for a couple of years, an opera festival was held on RiverWalk, which brought an entirely different audience to East Village.

Today, there are restaurants, retail, and some 3,200 residents, but the activation hasn’t slowed. EV is a testament to recent findings by the Center for Active Design (CfAD), which declared after a four-year study that activation brings key elements to public space that even the most well-designed un-activated space cannot. Equally important, the study found that activated spaces change people’s perception of their surroundings.

CfAd’s example was a plaza in a government district which, when activated, made people think more kindly of their local government. In our case, activation was one element in making people consider the once-derelict East Village as a place where they could not only practice yoga, but consider purchasing a home, too. 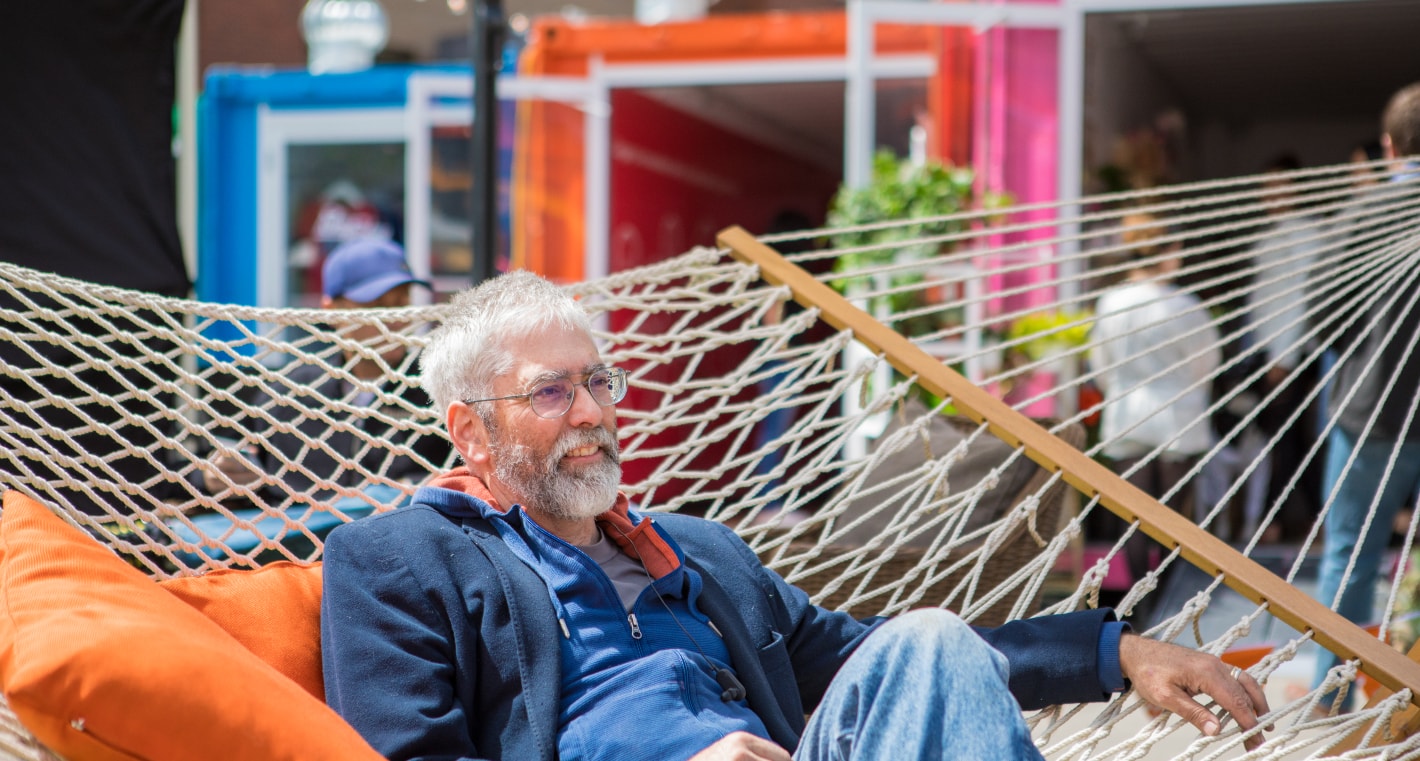 We helped Calgarians own the East Village story from the very beginning.

We helped Calgarians own the East Village story from the very beginning. We engaged early, often and in an entertaining and original way, connecting to the hearts and minds of residents across the city.

Locals were invited to a popular theater to see architectural presentations for the proposed National Music Center. As bridges were designed, they were asked to choose their favorite.

When a 30-acre park on an island in the Bow River was being planned, Calgarians were queried about the kinds of things they’d like to do on an island in the city. Early buyers were celebrated in EVE magazine and a ‘Resident Ambassador’ was chosen to live in and report on both of the first two towers. And thousands expressed their views on the new Central Library, autographed a key structural beam, and were kept abreast of every engineering advance. Maintaining input from the community throughout the process was key to maintaining their confidence.

This decade-long journey has led to the opening of Calgary’s new Central Library today in East Village. It contains within its 240,000 square feet every element of best practice in contemporary libraries, not least of which is that it’s a critical community gathering place and one of the last no-barrier public spaces where wealth or lack of it won’t get you different treatment.

The building, which replaces an aging and outdated predecessor, is the HQ of the city’s library system. It’s also an office of sorts for many Calgarians, particularly the men and women from nearby shelters who read the papers, have coffee, and consider it indispensable, and the new immigrants who come for classes.

For architects like Snøhetta and DIALOG, libraries are plum assignments, institutions that uniquely challenge form for an unknowable, multi-function future. Calgary’s new library wins on all fronts—it’s spectacularly beautiful, magically transformable yet human-scale. And there’s even room for books. 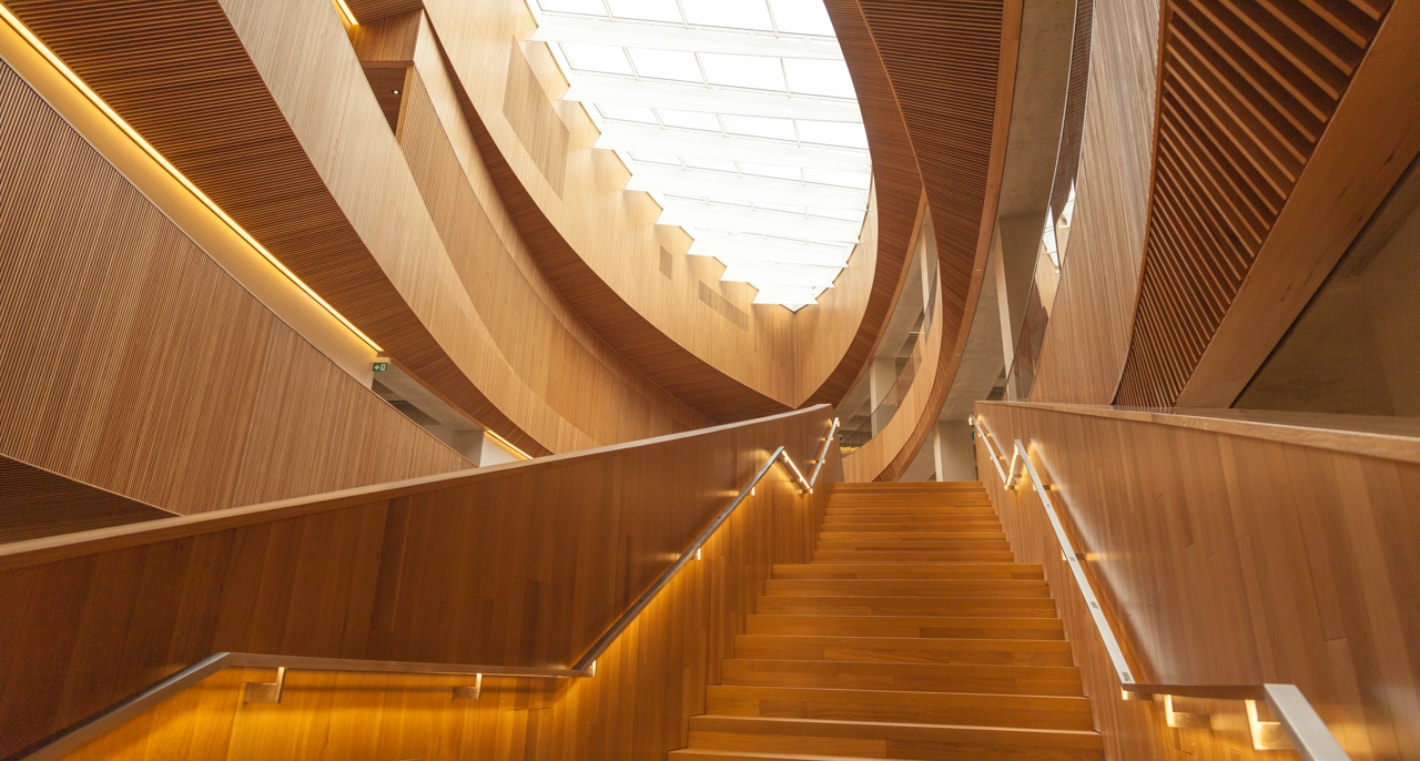 Welcome to the library

For the community, it’s both a landmark to be proud of and a galvanizing event that says the oil and gas-born city’s best years are ahead of it, not behind. We’re proud to have been a part of the library and its East Village home, and look forward to working with CMLC and Calgarians throughout the city in the years to come. Because if there’s one last lesson to be learned—it’s that when it comes to city building, the job is never done.

Resonance has extensive experience in the development of complex mixed-use developments in both urban and resort environments. We’d love to speak with you to help distill and articulate a vision for your project that resonates with your community.