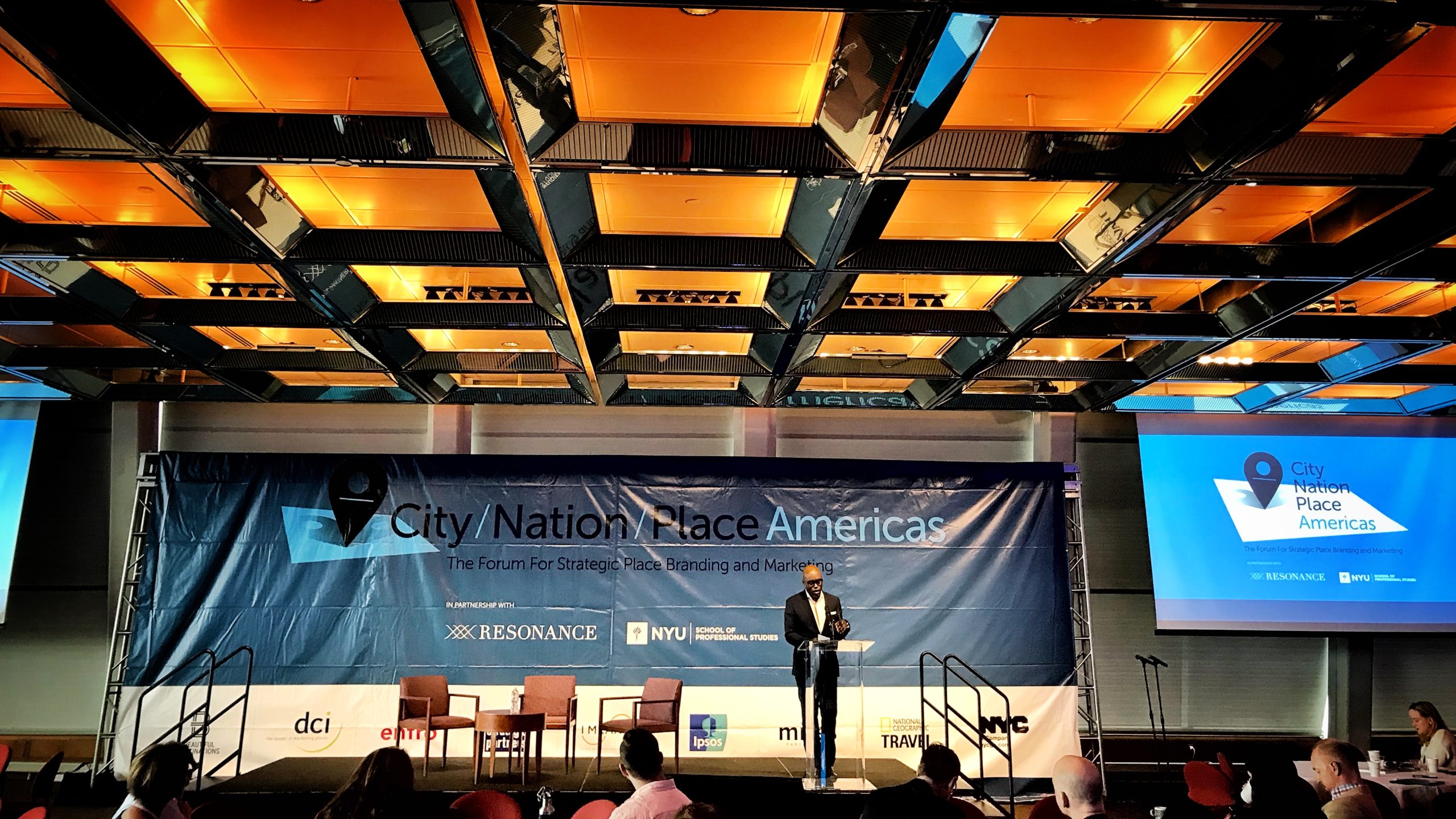 As partners in the City Nation Place America’s forum, it was our pleasure to welcome almost 200 clients and colleagues to this conference on strategic place branding and place marketing at NYU. The agenda was packed with interesting presentations and conversations with industry leaders from places like New Orleans, Jamaica, Philadelphia, Los Angeles, and Tulsa. To boil all of that down into a few key takeaways is a challenge, but here are five that resonated with me.

1. Places must measure and monitor both perception and performance

On Day 1 of the conference, I was honored to participate in a session titled “Perception Vs. Performance” with Jason McGrath, SVP, IPSOS Global Reputation Centre.

IPSOS recently completed a survey of both the general population and business decision makers in the U.S. to identify what factors are most important in shaping people’s perception of cities as places to live, visit and do business. As the diagram below illustrates, safety, cost and climate are important factors in all three areas. When it comes to choosing a vacation destination, factors such as landmarks, attractions and shopping are also important. Factors such as job opportunities, recreation and healthcare shape our perception of cities as place to live. And when it comes to doing business in a city, business decision makers told IPSOS that a wide array of factors were all very important. Interestingly, one factor that is important to both business decision makers and visitors is an exciting city environment.

My belief is that it’s by analyzing this gap between perception and performance that the brand strategy for a city, region or country should be developed. That means the branding of one place may require a focus on product development while for another it may require marketing and communications to better tell the story of the product and experience it already has on offer.

2. Destination marketing is a key driver of economic development

Our Ipsos panel also set the stage for what would be a mantra throughout the conference: destination marketers and economic developers need to work more closely together.

Adam Sacks, Founder and President of Tourism Economics kicked off Day 2 in a kinetic and smart presentation of the large role tourism not only plays in any economy, but the ancillary impacts for a destination’s overall economic development.

“EDOs and DMOs are both in the business of marketing a place,” he told the packed room.

“The decisions that they aim to influence are different. However the audience they market to and the product they promote have significant overlap.”

He went on to outline how destinations that are successful in becoming better places to live and visit show causality (not correlation) with business growth and economic development.

Kristian Sonnier, VP Communications & PR for the New Orleans CVB, also outlined in his earlier session that the number of flights and direct destinations served from the New Orleans airport—supported by tourism largely—is a boon for businesses because business traffic alone could never support that scale and consistency of air access.

3. Amazon helped teach city organizations how to work together

One of the most anticipated panels was the one featuring economic development and city officials from Miami, Kansas City, and Philadelphia to discuss their experiences in pitching their cities to Amazon, which is looking to establish a second headquarter location in another city.

The short answer: despite the massive undertaking and long odds of winning the “Amazon sweepstakes” as panel moderator Rob Hunden, President of Hunden Strategic Partners called it, each city would do it again tomorrow. Why? Because even if they didn’t win (Philly and Miami are still in the running) the paths of collaboration forged a cellular evolution of each city’s agency relationships.

“The Amazon proposal encouraged Miami to collaborate in a way that we hadn’t seen before,” said Michael Finney, president and CEO of the Miami-Dade Beacon Council. He outlined how Miami has learned the importance of communicating with nearby cities and the state of Florida as a whole and developed a consistent “narrative” for attracting new talent and investment.

Anne Bovaird Nevins, the Chief Strategy Officer at the Philadelphia Industrial Development Corporation, outlined how the Amazon pitch forced all stakeholders to collaboratively identify the region’s true strengths and weaknesses. The process also had an immediate benefit, even though Philly is still in the running for HQ2. The city will soon develop a global brand for tourism, economic development and many of the agencies invited in the pitch after Philly was chosen as one of the sites of the Brookings Institution’s global identity project.

The city will serve as a testing ground for developing an internationally recognized city brand.

Philadelphia can hit the road running with the fresh bounty of insights mined during the Amazon bid.

4. Every destination should be thinking about placemaking

The fact that every visitor and local is today a potential promoter (or detractor) of places via the content they share on social media means that neighborhoods, cities and regions have to tilt the field in their favor. One way of doing this is the use of placemaking to help people amplify an area’s sense of place without the need for a pricy ad buy.

Take the stories outlined in the “Placemaking as Place Marketing” panel, an exploration of how placemaking not only improves quality of place and social cohesion in communities, but can also act as a powerful form of marketing for a neighborhood or city as well.

Charles Gauthier, President & CEO, of the Downtown Vancouver Business Improvement District used a very small but powerful example in his presentation: the Alley-Oop alley reclamation in downtown Vancouver (and, conveniently, right behind the Resonance offices!). Charles walked the enthralled audience through his team’s myth-busting and misconceptions about the alley—how fewer cars and more people used it, even as a littered, unwelcoming shortcut, despite city planner assumptions of the opposite.

Then came the thousands of dollars of bright paint, the basketball hoops and relaxed event permitting that’s resulted in everything from lunch-time pick-up games to daytime dance parties that would make the Meatpacking District proud, to perhaps the biggest place branding prize: the alley as a backdrop for the “Likey” video by Korean pop band Twice. It’s been viewed on Youtube almost 260 million times. This, of course, in addition to the hundreds of daily shares with some iteration of #DowntownVancouver displayed loud and proud by visitors who now come to take their picture in the alley.

Robert Gregory, Chief Public Spaces Officer at Downtown Detroit Partnership, then translated the sentiment into the staggering numbers rising in Detroit’s Central Core, with dramatic before and after imagery of the city surrounding the redesigned and reprogrammed Campus Martius Park which has not only created a gathering place for the people of Detroit, but also helped attract more than $2 billion already invested into retail, office and residential space in the city’s downtown (with another $2 billion planned) and has increased office and retail rates up by 65% and retail occupancy up by 100%, powered by an influx of tech, finance jobs and the hotels, restaurants and sports and entertainment spots that these new tenants will soon demand.

My last takeaway was about the importance of a shared streetscape and place ownership by citizens and, eventually, by emboldened visitors. This sentiment—one that was germinating throughout the entire conference across a dozen panels and many experts, was captured so eloquently by Cameron Bailey, Artistic Director of the fabled Toronto International Film Festival.

Cameron’s talk, titled “From a Small Seed: The story of the growth of the Toronto International Film Festival,” outlined how the festival was an outsider in Toronto in the ’70s.

The festival, like Cameron who immigrated from Barbados, transformed the city from “a good place to mind your own business” into the world’s most ethnically diverse city—yes, even more than London and New York by most metrics—that it is today. The city also hosts more than 100 official film festivals.

The Toronto International Film Festival is only one of more than 100 official film festivals in the city.

His one line in particular stayed with me: “Festivals are a temporary reversal of the social order. They give power to those who usually don’t enjoy it.”

I think it’s up to all place makers and destination managers to try our hardest to make that temporary magic as permanent as possible for our fellow citizens and the visitors keen to share their joy.

We’re looking forward to attending the global edition of City Nation Place in London this November and hope to see you there to continue the conversation around the role destination marketers and economic development professionals can play in enhancing the quality of life and prosperity of place around the world.